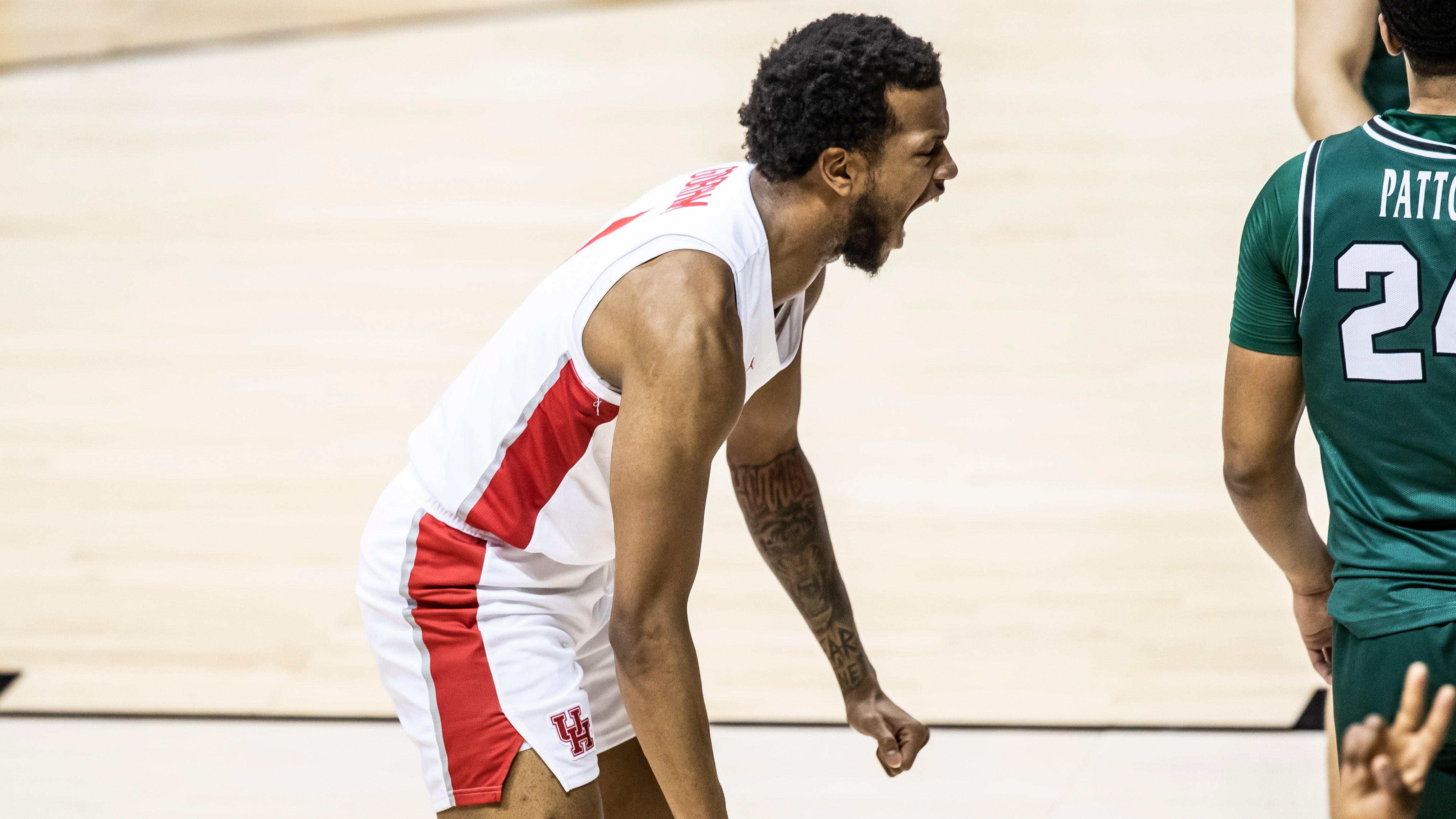 Houston basketball tore down the Cleveland State defense, scoring 87 in the win.

In the first half, Houston basketball lost DeJon Jarreau early after taking a shot to the hip and then lost Tramon Mark to two fouls. This left the Cougar’s to look to freshmen Jamal Shead to be the primary ball-handler. His inexperience definitely showed at times as he turned the ball over two times to Cleveland State. Cleveland State, on the other hand, was able to play all of their starters. However, Chris Green, the off-the-bench forward, found himself with 3 fouls in the first half. Cougar basketball showed to be dominant at times, but the indecision and lack of pace and control by Jarreau kept the Vikings in this March Madness game. After Oral Roberts became the first upset in March Madness, the Cougars remain fighting and trying not to be the next team upset. The impressive play of D’moi Hodge led his team with eight points, being the only player to make it to the free-throw line and the only player making 3-pointers. At the half, Houston basketball led 37-29 over Cleveland State.

The chippiness between these two teams was impressive from the first half and leaked into the second half of the play. Viewers saw March Madness’s beauty in the first half, but Houston ran away with it in the second half. Coach Kelvin Sampson made the adjustments, and the players executed my keys to their victory. The balanced scoring was a huge part of the Cougars game, with six players scoring in double digits. Quentin Grimes put up 18 points, 6-for-13 from the field, 4-for- from the 3-point range, 2-for-2 from the free-throw line, four rebounds, and four assists. Tramon Mark was the next highest scorer adding 15 points, three rebounds, two assists, and three steals. As for Cleveland State, the team was led by D’moi Hodge, who went 3-for-9 from the field, 3-for-7 from 3-point range, 2-for-4 from the charity stripe, three rebounds, and three steals. Houston Cougars advanced in the March Madness matchup with 87-56 over the Cleveland State Vikings.

Lost the AAC Preseason POY in the middle of the season.

For either team to move on in March Madness, rebounding will have to be key. Houston basketball is built around offensive rebounding and solid defense. Anyone watching could see how frustrated Cleveland State was getting trying to box out and stop the Cougars from crashing the boards. In the first half, the Cougars grabbed seven offensive rebounds to Cleveland State’s two. On the defensive end, Houston only outrebounded the Vikings by one. For Houston to maintain its lead and win this March Madness game, the Cougars need to continue to control the ball and bother the Vikings. Houston basketball was able to get to the free-throw line twice off offensive rebounds that frustrated Cleveland State.

In the second half, the Cougars really asserted themselves. March Madness was not going to be a deterrent for these very hungry coaches and players. Coach Sampson’s want and hungry was seen in the second half as the team fought for every ball, cleaned up its act, and used its size and strength to build a 36 point lead.

March Madness is known for teams upsetting each other. Cleveland State is upsetting the Cougars right now as they have stolen the ball four times from the Cougars, which led to points on the other end. The active hands and ability to anticipate passes will be a huge boost for the Vikings. If the Vikings can keep in front of the Cougars, Cleveland State could keep dancing in March Madness. With the lack of ball movement, Houston is struggling to score in man-to-man situations. Quentin Grimes, Justin Gorham, and Fabian White Jr. led the team in the first half, scoring eight points apiece. Houston continues to have active hands but is playing timider than Cleveland State. The Cougars aren’t willing to over-extend and allow that mistake to turn into points. Coach Kelvin Sampson has taught his team well, and he would rather defend well than cause turnovers.

Cleveland State continued to fight, but Houston turned it up in this March Madness matchup. The Cougars matched Cleveland State’s steals in the first half in the first 10 minutes of the second half. The ball’s active hands led to points and limited looks for the Vikings.

With the loss of Jarreau in the first half, Houston went one-on-one with Cleveland State. The Cougars really struggled to move the ball and find the open man for the easy buckets. The Cougars need to have crisper passes and move the ball with urgency. The Cougars can play in tight games but prefers to have a comfortable lead and maintain the separation. One of Houston’s biggest misses is the double team that keeps coming off a pick and roll. Gorham has had a few chances for easy buckets as two players crash on the guards. Cleveland State needs to hear this advice too. The team only had six assists in the first half. Passing someone open is a huge help in any game and will take you far in March Madness. With ball movement, these teams need to take care of the basketball.

In the second half, Coach Sampson saw his players share the ball and rack up 6 assists in the first 10 minutes of the second half.  Shead was able to calm down and move the ball. The rest of the guard really stepped up to help take the pressure off of him. Houston’s next March Madness matchup will be against the winner of Rutgers and Clemson. All eyes will be on  DeJon Jarreau and his injury. If he is healthy, this team can be even more effective.