March Madness: Oregon State Basketball Upsets Tennessee in Round of 64 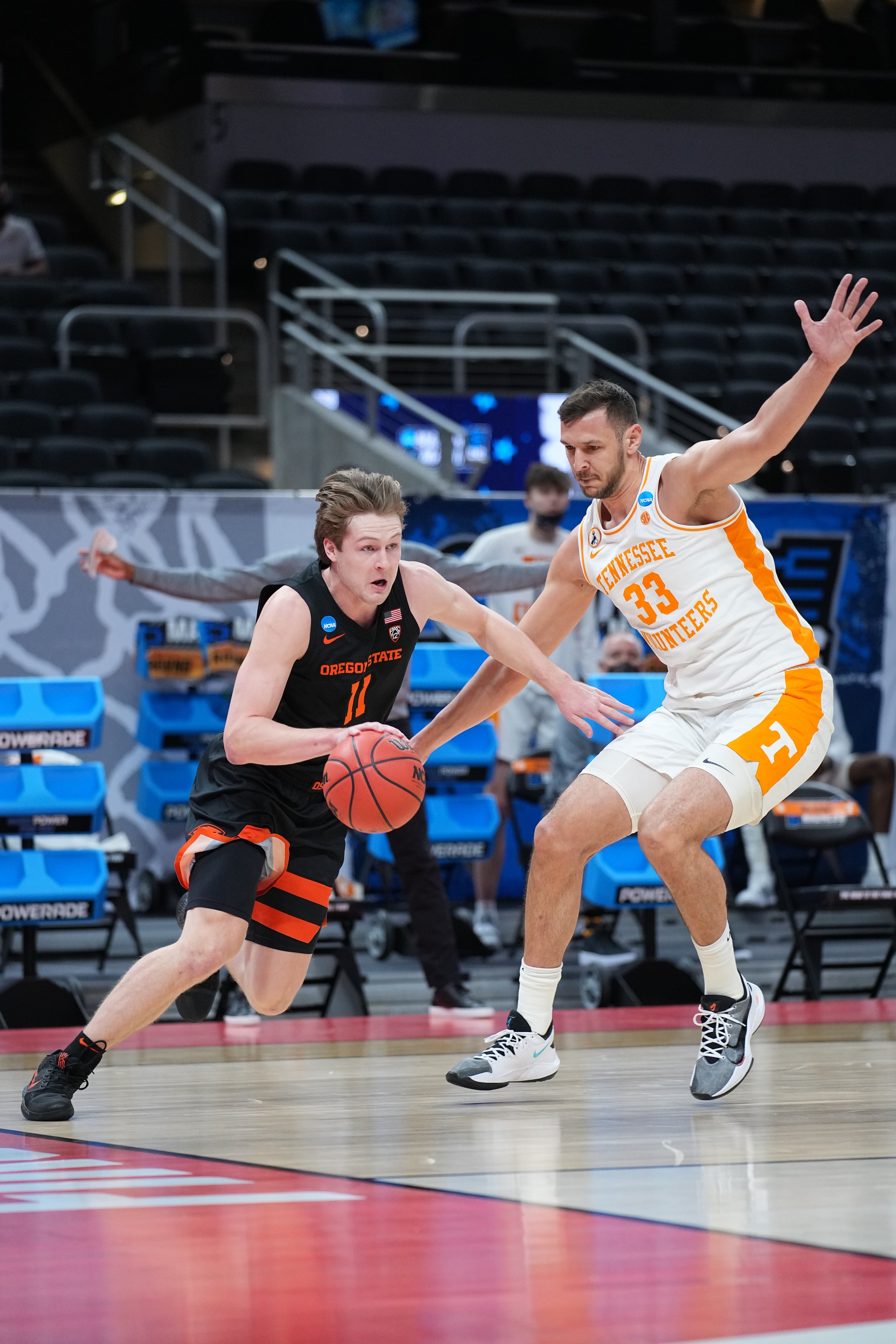 Oregon State basketball led from start to finish as the Beavers won their first NCAA tournament game in 39 years upsetting Tennessee 70-56. Oregon State started out of the gate hot from the field and played relentless defense to defeat the Volunteers.

Roman Silva was perfect 8-for-8 from the field to lead the Beavers with 16 points. Ethan Thompson finished with a double double collecting 10 rebounds and 13 points, while Jarod Lucas and Zach Reichle added 14 and 10 points respectively for the Beavers.

Tennessee struggled on offense from the start and never found a rhythm throughout the game. Keon Johnson led the way for the Volunteers with 14 points. Jaden Springer finished with 13 points and Santiago Vescovi added 11.

Tennessee never had a chance against the defense of Oregon State. The Volunteers offense has already struggled throughout the season and its inconsistencies were highlighted against the stellar defense that Oregon State showed. Whether the Beavers were in a zone or man-to-man, it didn’t matter they completely controlled the game. Oregon State forced 12 Tennessee turnovers. They held Tennessee to 33% shooting from the field and only 19% from 3-point range. It was an outstanding game plan that Tennessee couldn’t overcome.

Tennessee’s strength all season has been their defense. While it wasn’t entirely up to the standards that Rick Barnes hopes for the game in and game out, it certainly isn’t to blame for this poor performance from the Volunteers. Tennessee was stifled quickly as Oregon State knocked in a few shots and Tennessee couldn’t buy a basket. Tennessee from that moment on looked defeated. The normal fight and grit you see from a Tennessee team were no longer there. They collapsed with John Fulkerson in that game. Fulkerson may have made a huge difference because one thing you can always count on with Fulkerson is his will and determination. This didn’t look like a Tennessee team that was ready for the Big Dance.

Oregon State was not going to be in the NCAA tournament at the start of March. On February 20, after a loss to Colorado, this team was 11-11. The NCAA tournament wasn’t even thinking of a chance where Oregon State may happen to get in, but they did. The Beavers won three of their last four regular-season games. They then went to Las Vegas where they shocked the Pac-12 and won three straight games to win the tournament. Now they just upset Tennessee for their first NCAA tournament win in 39 years. There is something special happening for Oregon State and they now have an opportunity to ride that magic into the Sweet 16.