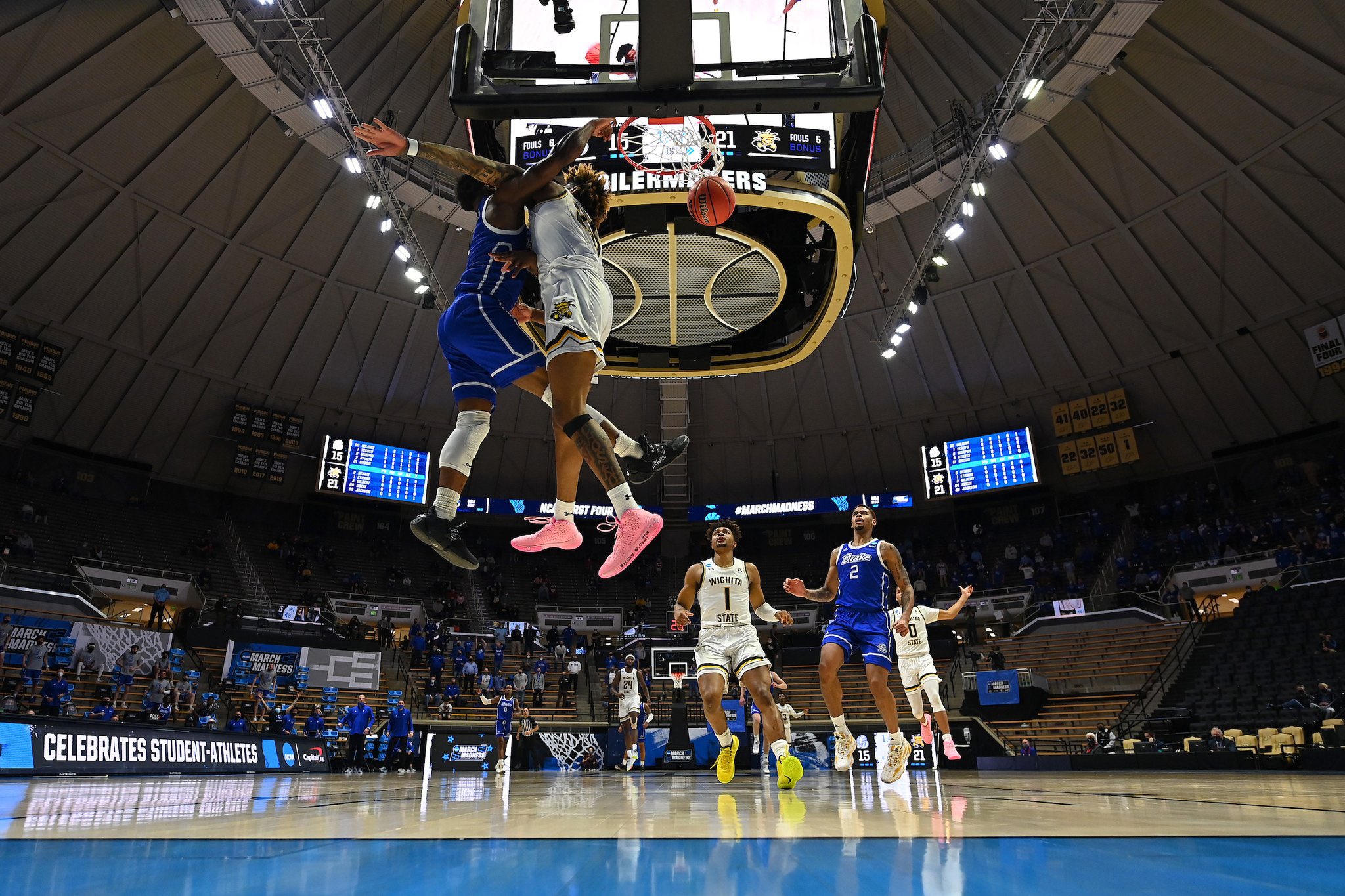 In a lull of a first four matchup, Drake basketball defeated Wichita State 53-52. Wichita State had a chance at the buzzer as Alterique Gilbert lifted for a 3-pointer, but a hard clang rang through Mackey Arena as the ball hit the front of the rim. The history of these two teams led people to believe that Wichita State would walk away victorious.

Drake moves on in a thrilling win over Wichita State. pic.twitter.com/0eyeiaLQFH

There were many times throughout the game that the Shockers look like they could run away with it. In the first half, the Shockers led by as much as 10 before Drake went on a run and finished at the half with Wichita State up 21-20. Drake shot the ball better in the first half shooting 30.8% from the field, 25% from 3-point, and 50% from the free-throw line. The team was also led by Joseph Yesufu, who had seven points,  shooting 3-for-8 from the field 1-2 from 3-point range, one rebound, one assist, and two steals. Yesufu got his second foul with 6:30 left in the first half.

Drake battles past Wichita State 53-52 for its first #MarchMadness win since 1971! #FirstFour pic.twitter.com/jF98askqPQ

For both teams, the success came when the teams moved the ball in this first four game. Drake did a better job in the game. In the first half, the Bulldogs had four assists to the Shockers’ three. Drake basketball was able to move the ball better and create shots towards the end of the first half bringing the game within one. Wichita State looked to have the game in hand but seemed to go stale. Alterique Gilbert kept trying to create space and shots when there were none. Even though the Shockers were able to outrebound Drake in the first half in the first four games, the inability to make shots beyond the arc hurt this team down the stretch. In the first half, the Shockers shot nine 3-pointers but only made one of them for 11.1%. In the second half, Wichita State continued its struggle making two of the nine 3-pointers attempted. The Shockers finished the day shooting 3-for-18 from beyond the arc for 16.7%. This was due to the lack of ball movement. Wichita State finished the game with seven assists.

This was another area I stressed for a win. Drake’s Darnell Brodie was a dominant force inside in the first four matchups. Leading the Bulldogs in rebounding on both ends of the floor, he finished with 10 rebounds. Wichita State outrebounded the Bulldogs in the first half on the offensive end, grabbing five rebounds to Drake’s two. However, Drake was able to grab 17 defensive rebounds to the Shockers’ 16. What doesn’t show here is a huge part of what brought the Bulldog’s victory in the first four game. Drake was given seven offensive rebounds that the Shocker came down with and then fumbled out-of-bounds. A huge letdown for Wichita State. While this game was a hard-fought battle, some of these rebounds could have been fouls on both sides. Wichita State was able to get the free-throw line 22 times but only made 11 of them. Drake was able to get to the charity stripe only 10 times, sinking six of them.

This, I believe, was Wichita State’s downfall and an area that Drake thrived in the first four matchups. The Bulldogs did not force shots but found the open man or the cutter for solid buckets. The Shockers struggled in this area. Wichita State ended the day shooting 19-for-56 for 33.9% from the field. A majority of these shots were forced from beyond the 3-point line or contested shots down low. Instead of pulling up early, passing to an open man, the players would get caught trying to force it up.

In these first four games, Wichita State had its chances to win by making its free-throws, making another 3-pointer, and taking care of the basketball. While the Shockers did not win this game, the team overcame a lot of adversity to get this far. The consistency and maturity of this Drake team were too much for Wichita State to handle. Wichita State did not move the ball to find the open man and often settled for a 3-pointer or a forced shot. Drake moves on to face off against USC on Saturday at 3:30 on TNT in the round of 64.

Started from the bottom now they're here.