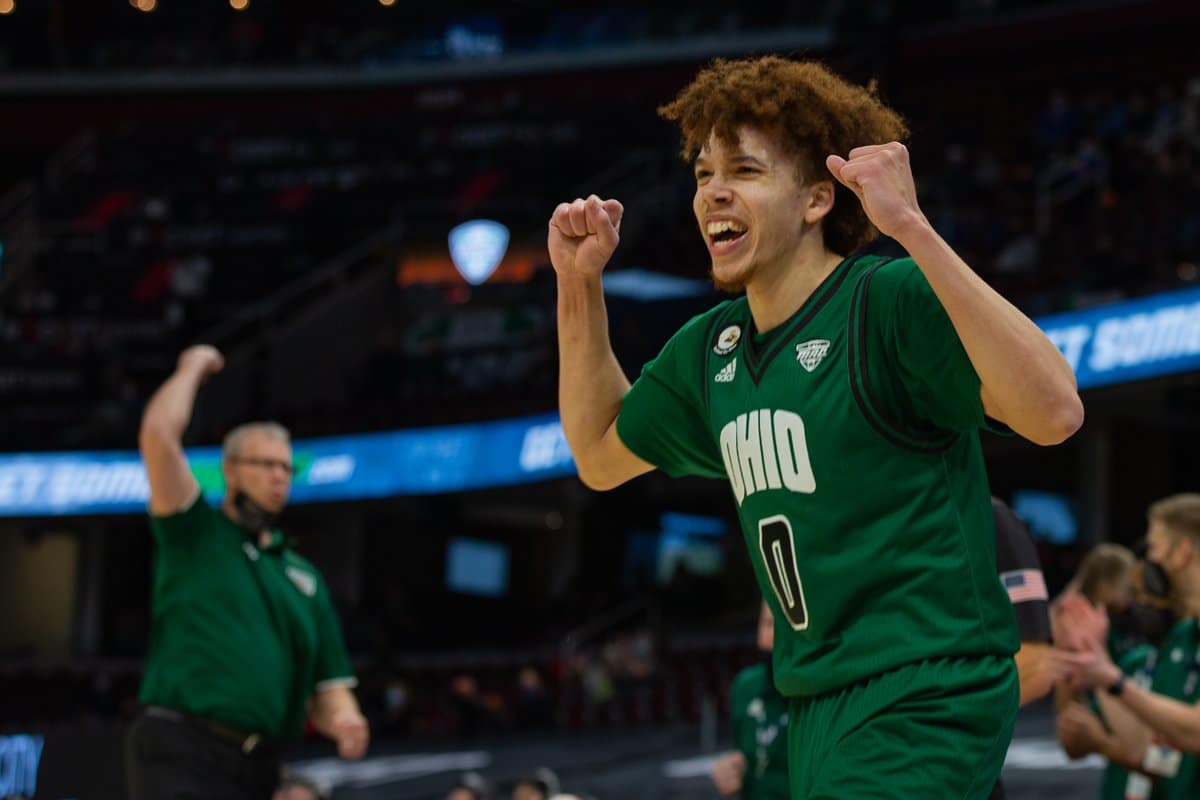 With just a few days until the Round of 64, it’s time to take a look at three double-digit seeds with first-round upset potential during March Madness.

It feels pretty good to hear the word Cinderella for the first March in two years, doesn’t it? Get used to hearing it. After a conference championship week stacked with upsets and bid-stealers, this March Madness looks destined to contain an absurd amount of upsets.

Considering the strength of the mid-major automatic qualifiers, as well as the centralized tournament structure, this weekend’s first-round should be nothing short of jaw-dropping.

The 13-seed Ohio Bobcats are slated to take on the Virginia Cavaliers on Saturday in a game with no shortage of storylines.

The obvious storyline is the status of Virginia, who had to pull out of the ACC Tournament after their quarterfinal win over Syracuse due to a positive COVID-19 test from within the program.

Despite the worries surrounding the Cavaliers’ tournament status, Virginia will still compete in the Big Dance, passing all protocols and being deemed eligible to compete by the NCAA.

However, the true challenge has not yet been won by Virginia.

That challenge is the daunting task of defeating Jason Preston and the Ohio Bobcats. Back in November, Preston and the Bobcats nearly upset Illinois, leading the entire game before narrowly losing in the final minute.

Preston is the best player that you’ve probably never heard of. The junior guard averages 17 points, seven rebounds, and seven assists per game. What makes Preston special is not necessarily his gaudy per game averages, but rather his ability to show up in his team’s biggest games.

Preston scored 31 points to go along with eight assists and six rebounds against the Illini back in November. In last week’s MAC tournament, Preston led the Bobcats in scoring and assists in each of their three games, recording a 22-6-7-5 stat line in their championship win over Buffalo.

For a team that was upset by San Francisco during non-conference play and lacked a single win over a Top-25 squad the entire season, Tony Bennett’s Cavaliers should be terrified for their first-round game against Ohio.

One team that you’ve probably heard a lot about this week is the Winthrop Eagles. The Big South Conference champions went 23-1 in the regular season, remaining unbeaten well into the season.

Although Winthrop did not record a single game against a Quad-1 opponent, the Eagles are both experienced and dangerous, as they had punched their ticket to the NCAA Tournament just days before its cancellation last year.

The Eagles were rewarded for their patience in the form of a twelve seed. Perhaps even more rewarding was their first-round opponent, as they’ll take on Villanova in the nightcap of Friday’s action.

Typically, Villanova would have no trouble knocking off a team like Winthrop. This time around, however, the Wildcats could be in store for a quick exit from the tournament.

Without their best and most experienced player in Colin Gillespie, the Wildcats will have a big challenge weathering the storm against a hot team. Even with the surprise early return of Justin Moore, who suffered an ankle sprain in Villanova’s regular-season finale, the Wildcats should still be on upset alert, especially considering how sloppy and unmotivated they looked in their first-round Big East Tournament upset at the hands of Georgetown.

How many times are we told to keep an eye out for Syracuse in March?

Clearly not enough. Once again, the Orange are flying under the radar heading into the Big Dance, winning their way into consideration after a strong showing in the month of March.

Jim Boeheim’s Syracuse squad are an eleven seed and will take on San Diego State in the first round.

The Aztecs were well on their way to earning a one seed before last season’s tournament cancellation, which will surely be a source of motivation for Brian Duchter’s team this March.

Record-wise, this is a fairly similar San Diego State team to last season’s, as the Aztecs lost just four games, totaling only six losses across the last two seasons.

So why would San Diego State be on upset watch? Two reasons.

With the hot shooting of Buddy Boeheim and Joe Girard, Syracuse is a force to be reckoned with this March. As Jim Boeheim’s career winds down, how fitting would it be for his Orange to make a deep run under the leadership of his son?

This one makes sense for too many reasons. Of all the double-digit seeds in the NCAA Tournament, the Syracuse Orange are the most primed for a first-round upset.