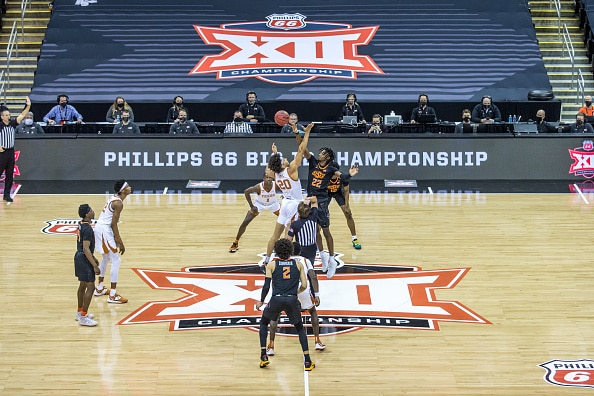 Selection Sunday has come and gone, and the Big 12 heard seven of their teams called. Baylor, Kansas, Oklahoma, Oklahoma State, Texas, Tech Texas, and West Virginia will all play for a chance to win this year’s NCAA Tournament. Here is each team’s best, worst, and likely finishes as well as their path to the championship (if all high seeds win).

As the #2 overall team in the tournament, Baylor has its best chance in school history to win a championship. Their guards’ trio of Jared Butler, Davion Mitchell, and Macio Teague might be the best in the country and they also have Mark Vital, Adam Flagler, and Matthew Meyer as supporting players. Baylor should be able to make the final 4 or national championship, but they will most likely face two forward-heavy teams in UNC and Purdue on their way there.

With COVID concerns amongst the program, this Jayhawk team is hard to evaluate. Bill Self announced today that David McCormack will be available for the tournament while Tristan Enaruna will not, and Jalen Wilson will return if Kansas makes it to the Round of 32. Ochai Agbaji has been great as of late, and Marcus Garrett’s defense will take any team’s star player out of it. If McCormack can get back into game shape, this Kansas team can go far. The matchup against Iowa in the Sweet 16 will most likely be the end of the road, but they can also lose to USC the round before or beat Iowa and lose to Gonzaga in the Elite 8.

Best Finish: Round of 32

Worst Finish: Round of 64

Likely Finish: Round of 32

Oklahoma’s ice cold finish to the season did not help them one bit. They went 1-5 in their last six games and fell to an 8 seed and a potential second-round matchup with Gonzaga. That first-round matchup with Missouri is very losable too. Austin Reaves will score 20 for the Sooners, but they will need Harkless, Gibson, and Manek to all step up if they want to play Gonzaga and have a chance against them.

Oklahoma State has been the consensus worst seeded team and they will have a tough road ahead. They have a solid mid-major Liberty team, arguably the best 5 seed in Tennessee, and then Illinois in three straight games. The road won’t be easy but with Cade Cunningham, the chances increase dramatically. This Oklahoma State team has Final 4 potential, but an Illinois team composed of Ayo Dosunmu and Kofi Cockburn might be too much firepower to get past in the Sweet 16.

This Texas team has the talent to make the Final 4 and maybe even the National Championship, they just need to execute. Their talented guard trio of Courtney Ramey, Andrew Jones, and Matt Coleman are all extremely talented, and they also have great forwards too in Jericho Sims, Kai Jones, and Greg Brown. After winning the Big 12 championship, Texas has great momentum and a relatively easy road to the Sweet 16. If Michigan isn’t at full health then Texas can easily be the team representing the South Region in the Final 4.

Worst Finish: Round of 64

Likely Finish: Round of 32

Based on the resume, it would be hard to trust Texas Tech after no wins against Baylor, Kansas, West Virginia, and Oklahoma State. The eye test shows that this team is solid though, and Coach Chris Beard knows how to win in March. Mac McClung has been a huge acquisition for the Red Raiders, and Terrence Shannon and Kyler Edwards improve every game. Their round is going to be tough, and they will probably see their season end in the Ohio State game or before.

The only thing holding Coach Bob Huggins from making the Basketball Hall of Fame is a championship ring. With elite big man Derek Culver, star point guard Miles McBride, sharpshooter Sean McNeil, and all-around player Taz Sherman the Mountaineers can make a run in the tournament. They have one of the easier paths for a three seed before taking on Illinois, but if their stars can perform they can make a run. Keep an eye out for that San Diego State game if the Aztecs make it, as that could easily be a trap game.