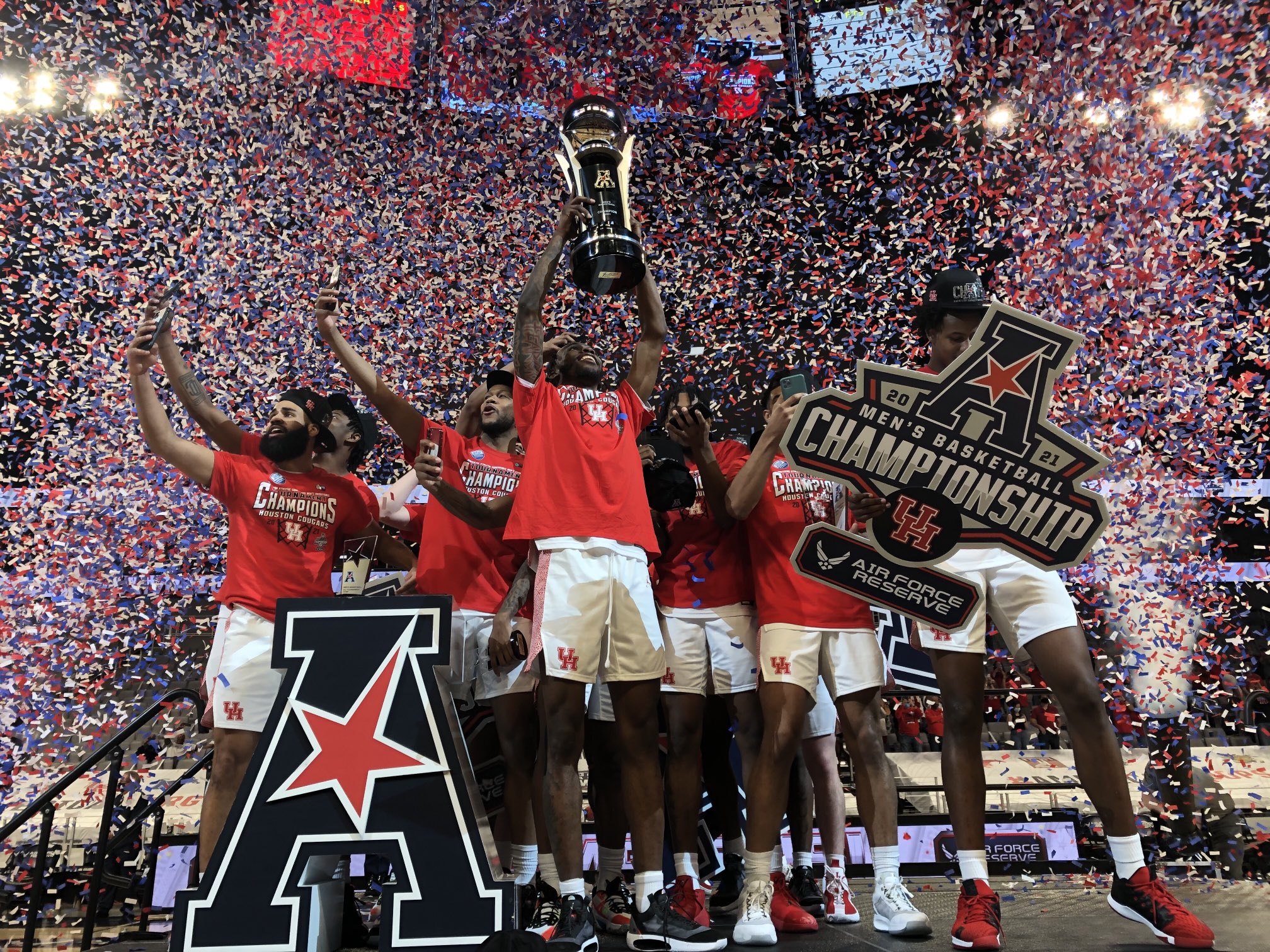 In the first half of the American Athletic Conference Championship, this game looked similar to yesterdays for Houston basketball. Keith Williams and his undisclosed injury from the Bearcats game yesterday started in today’s game against Houston. The Cougars were balanced and put up 41 points again while holding the Cincinnati Bearcats to 27 points. The Bearcats were competitive in rebounds, grabbing 16 to Houston’s 20 rebounds. Marcus Sasser led the American Athletic Conference Championship game’s first half. Sasser put up 14 points and two rebounds. DeJon Jarreau added 10 points, four rebounds, five assists, one steal, and one block.

Meanwhile, the lone bright spot for the Cincinnati Bearcats was Jeremiah Davenport, who put up 11 points, one rebound, and one assist. The real success in the first half was Houston’s ability to share the ball. The thirteen assists and ability to play as a team allowed them to build the lead. Coach John Brannen really needs to take a note from Coach Penny Hardaway and Memphis basketball and put on the pressure. The Bears did press towards the end of the first half, and while Houston handled it better, it still made the Cougars uncomfortable.

In the second half, Mike Saunders pulled up lame in the first three minutes of the game. He was taken back into the locker room after getting a quick look over by the staff. The second half was more of the first. Houston continued to play smart, take smart shots, play defense, and take the lead up to 37 points. Mike Saunders returned to the game with just under 11 minutes left. With around 6 minutes left in the American Athletic Conference Championship, Houston was able to sit most of its starters and allow for some of the bench players to get valuable minutes. Quentin Grimes was the leading scorer for both teams putting up 21 points, three rebounds, one assist, two steals, and one block. Grimes received some help from Marcus Sasser finishes his day with 16 points, three rebounds, and one assist.

In the American Athletic Conference Championship, Houston basketball really came into the game prepared. This Cougar team knew what to expect and executed. With all of the teams that the Cougars have the potential to see in the NCAA Tournament, Coach Kelvin Sampson will need to be prepared. In the AAC Semifinal game, the Cougars did not look prepared. One of my main focuses for Houston basketball will be working on press coverage, and I would even like to see the Cougars use a press of their own against other teams.

Houston basketball played its game today. The team stayed focus, made smart shots, won 50-50 balls, and shared the ball. Of the 37 shots made, 24 of them came off of assists, which is a huge part of Cougar basketball. Houston basketball won 91-54 in the American Athletic Conference Championship over the Cincinnati Bearcats. Houston is known for its defense, sharing the ball, and rebounding. If this Cougar team can continue to play their basketball and not play into other team’s pace of play or other team’s games, this team should be dancing for a while.

Houston is 24-3 and lost Caleb Mills — the American Athletic Conference Preseason POY — midway through the year.

Not many coaches in the sport better than Kelvin Sampson. https://t.co/HK98BcIDdI

3) Take care of the ball

The American Athletic Conference Championship was won by taking care of the ball. The Cougars’ only losses have come off games where the team had 10 or more turnovers. There are times that when the Cougars get comfortable, they start to force the ball, take more risks, and hurts the team. As mature as this team is, Houston basketball will need to stay confident and believe that they can win. Houston basketball should be locked in as a two seed even with this win in the NCAA tournament. The AAC is hoping to steal at least one more bid for the tournament, but in any case, put on your dancing shoes Houston.