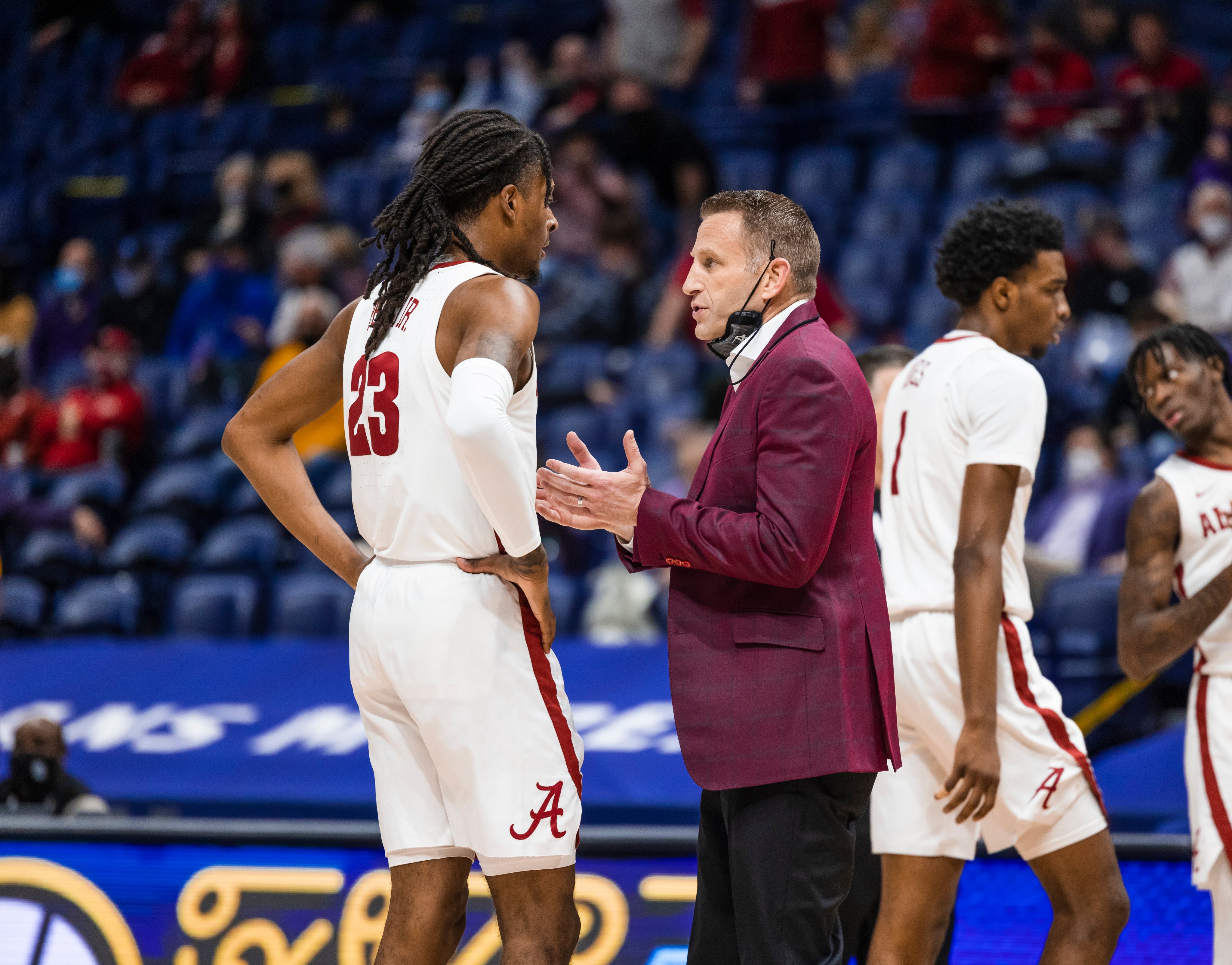 The SEC Tournament Championship gave us one of the top games of the season.

Nashville, Tennessee – It was the SEC Tournament Championship. It was Alabama vs LSU. The tension was fierce. The battle was physical. Each of these teams played as if it could be the future national champion. And no….. this wasn’t an SEC gridiron match on the green grass of Death Valley or the hallowed ground of Bryant-Denny Stadium. It was a battle fought on the hardwood of Bridgestone Arena in Nashville, Tennessee. The sweet sound flowing out of that arena today in Music City USA was the melodic sound of two teams talking, jawing and tickling the twine from all areas of town. The result was the #1 seed Alabama Crimson Tide defeating the #3 seeded LSU Tigers by a score of 80-79… the Crimson Tide winning their first SEC Championship since 1991 under head coach Nate Oats.

Alabama was led in scoring by Jaden Shackleford’s 21 points and 5 rebounds and current SEC Player of the Year and SEC Defensive Player of the Year Herb Jone’s double-double of 13 points and 11 rebounds. The player of the game could most definitely be Trendon Watford of LSU. Ironically Watford is a 6’9 forward from Birmingham, Alabama who scored 30 points and grabbed 8 rebounds for head coach Will Wade’s Tigers. Watford was a bonafide warrior as he kept his team in the game for the entire 40 minutes. The Crimson Tide were relentless as well in their pursuit of the title. Anytime LSU would make a run and take a lead, the Tide always seemed to find an answer whether it was with Shackleford with a timely three, Jones with a huge defensive play or the play of the players off the bench led by guard Jahvon Quinerly’s 14 points. How big was the bench for Alabama? The Crimson Tide went 9 deep in their rotation to 7 deep for LSU and the Tide bench outscored the Tigers 28-0. The game was anything but a blowout as the second half featured multiple lead changes with the game ending as the Crimson Tide watched as LSU’s last gasp rebound put back for the go-ahead score and win fell short as the buzzer sounded.

This SEC Championship was a battle for the ages. The pregame rumble between the teams at midcourt was nothing less but a preview of the terrific performance that the Tide and Tigers gave a national television audience. Anyone who watched the game could easily see either one of these two teams playing for a national championship on a Monday night in April. And if either of these two teams are playing… the opponents better bring their big boy shorts.

2) Trendon Watford Is A Manchild

LSU may have lost the battle but Watford played like a commander ready to win the war. His fierce determination and aggressive attacks to the basket kept LSU in the game for its entirety. Alabama is a great team… as it showed itself today. While LSU is a good team… Watford proved himself a great player with no fear of anyone or anything. He left everything on the floor as was seen in the tears the flowed after the horn sounded and the Tigers last shot fell shirt of the basket.

3) Nate Oats and Will Wade Were Masters Of The Moves

The Tide and Tigers went no holds barred today and while the players gave a performance for the ages, the coaches seem to push all the right buttons. Each coach was always seen showing so much enthusiasm and passion on the sideline…. trying in anyway possible to make sure that their teams on the floor played with an urgency to attain the title. It is the job of the coach to get as much as possible out of their team throughout the year and these coaches got every last ounce of energy that their players could muster for forty minutes. When the brackets come out today, it will be a smart pick to advance the Tide and Tigers pretty deep. Not just because they have great players, they have coaches who can coach…… and coach well at that.