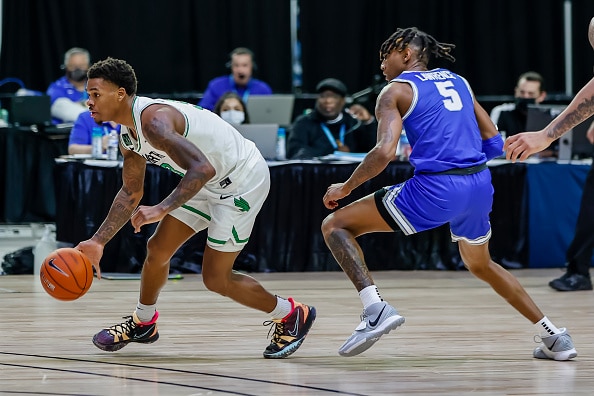 North Texas wins the Conference USA Championship for an automatic bid into the NCAA tournament.

North Texas shot out of a cannon to start the Conference USA championship game, scoring the first 17 points of the contest and leading Western Kentucky 17-0 after six minutes of play. The Mean Green needed every bit of that lead as Western Kentucky staged a full rally taking a one-point lead with 9:08 remaining in the game. Western Kentucky extended that lead to seven points with under three minutes to play in the game, but North Texas showed their resilience hitting a game-tying 3-point basket with 0:22 remaining to send the game to overtime. North Texas found their earlier rhythm right away to pull away 61-57 to head back to the NCAA tournament for the first time since 2010.

Javion Hamlet led the way for North Texas with 20 points and five assists. Mardrez McBride added 13 points including the game tying 3-pointer at the end of regulation and Zachary Simmons finished with 12 points for the Mean Green.

Josh Anderson led all scorers for Western Kentucky with 14 points. In possibly Charles Bassey‘s last collegiate game, he finished with 13 points and 11 rebounds. Jordan Rawls finished with 11 points for the Hilltoppers.

For just the fourth time in program history, North Texas will be in the NCAA tournament. This will be the Mean Green’s first appearance since 2010 and their first tournament appearance since they made the move to Conference USA. In all three previous appearances, North Texas has earned a No.15 seed and suffered a defeat in the first round. This looks to be The Mean Green’s best team to reach the Big Dance after they won the Conference USA in 2020 and were unable to defend their regular season title due to Covid-19. North Texas will likely be seeded between a 12-14 seed and could easily be an upset waiting to happen.

Despite the quick 17-0 run to start the game for North Texas, this game was full of defensive pressure making things extremely challenging for both offenses. This was the first meeting between the two this season but it felt as if they knew each other’s every move. North Texas shot an alarming 60% in the first half while holding the Hilltoppers to 30.8% from the field. While North Texas held steady defensively throughout the game, Western Kentucky turned up the defensive pressure holding North Texas to just 19.4% shooting in the second half.

3) Javion Hamlet for the Win

It was a special night for the senior of North Texas. After scoring 12 points in the first half, the first-team all-conference selection, Hamlet was held to just two points in the second half. Hamlet’s offensive absence was a large part of Western Kentucky’s comeback to take a lead. Hamlet was just one of six from the field in the second half but his basket with 2:30 remaining sparked a 5-0 run to end the half to send the game to overtime. In overtime Hamlet shined. He didn’t let a tough half get the best of him as he scored six of his game-high 20 points in the extra five minutes to help will North Texas win.