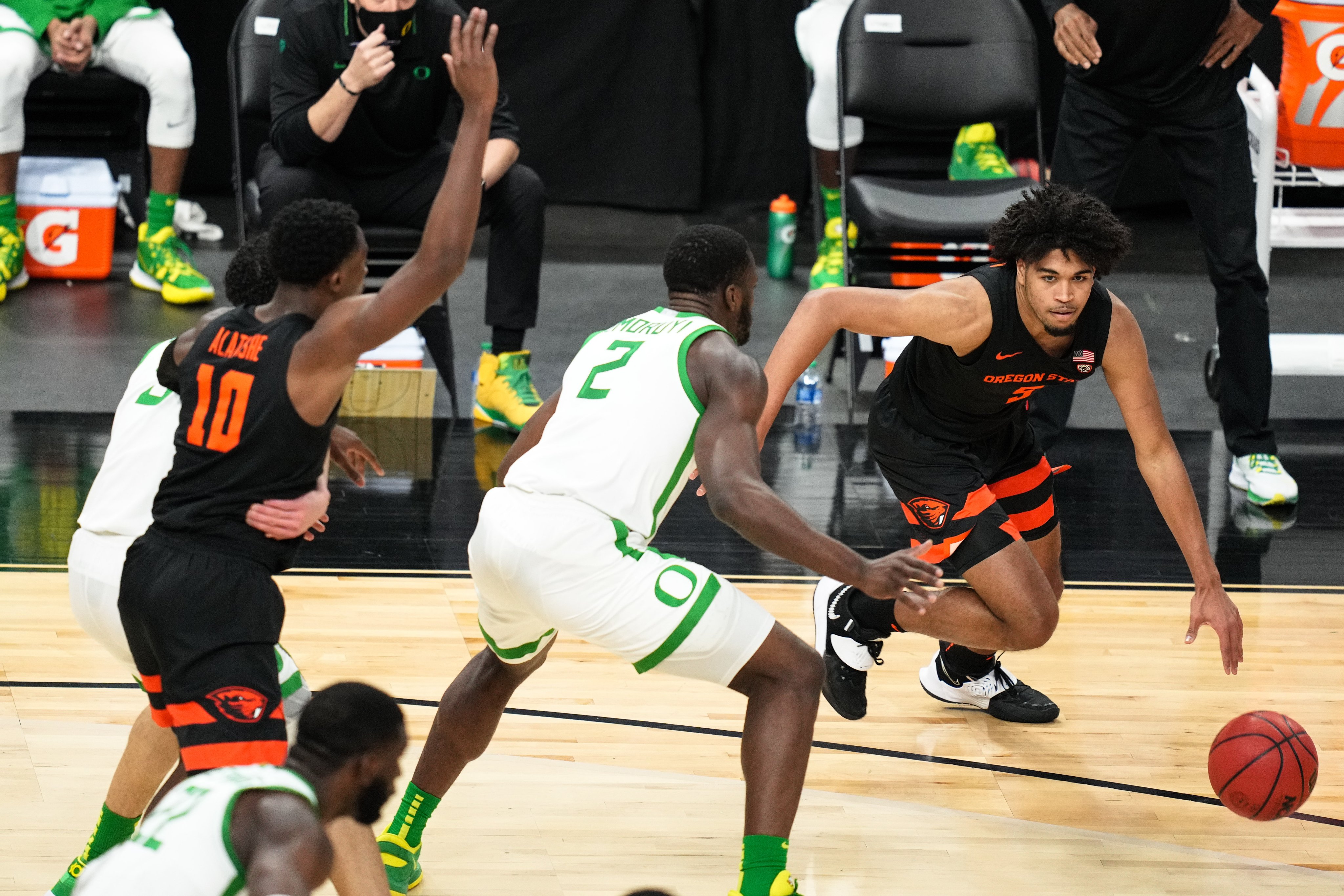 In the first semifinal game, the fifth seed Oregon State Beavers knocked off the top seeded Oregon Ducks 75-64. Oregon State went on a 22-9 run going into half to give themselves enough of a cushion to hold off a late Oregon run to win 75-64. Ethan Thompson led Beavers in scoring with 16 points, along with a strong performance from Warith Alatishe who had a double-double with 12 points and 12 rebounds. Four of Oregon State’s starters were in double figures, with Rodrigue Andela adding 13 points off the bench.

In the second semifinal game, the third seed Colorado beat the second seed USC Trojans to advance to the finals. The Buffaloes started off the game red hot with a 17-0 run, which was enough to hold off a late second half run by the Trojans. Colorado went into the half up only 9 points after McKinley Wright IV came out of the game for a little with a head injury. Evan Mobley helped USC overcome a 15-point deficit to tie the game at 70, but D’Shawn Schwartz made a layup with 3.3 seconds left to give the Buffaloes the lead. USC had one final opportunity to win the game, but Wright IV stole the ball and Colorado held on for the win. Wright IV finished the game with 26 points, along with Jeriah Horne adding 19 points. Mobley had 26 points, nine rebounds, and five blocks.

After wins against UCLA and Oregon, the Beavers are one win away from securing an automatic bid to the NCAA tournament. The path for the Oregon State seemed nearly impossible, but the Beavers have taken down two tournament-bound teams in Las Vegas. Oregon State went .500 in conference play and finished sixth in the standing, but due to Arizona being ineligible for postseason tournament, Oregon State was moved to the fifth seed. They were given a first-round bye, which has been a significant advantage for Oregon State. The Beavers struggled this season against the top five teams in the Pac-12 with their lone win coming against Oregon (without Will Richardson) early in the season. Oregon State’s season was very mediocre, that fans were questioning whether Wayne Tinkle should still be the coach next season. The Beavers are ranked 101st by the NET rankings and 124th by KenPom, which means their only way into the tournament is by winning the Pac-12 tournament. Ethan Thompson, who made first team All-Pac-12, has been the leader for the Beavers. Oregon State was predicted to finish last in the Pac-12, but their miraculous run has led them to be one game within making the NCAA tournament.

2) Oregon misses the chance at a 5 seed

Even though the Ducks are going to get an at-large bid to the NCAA tournament, they lost their opportunity at the chance to get a higher seed. If Oregon were to win the Pac-12 tournament, they would have been in contention for a 5 seed in the west. Instead, the Ducks will have to wait to see where the committee puts them in the bracket on Sunday. Oregon started off the season slow, but they won 10 of their last 11 games to win the Pac-12 regular season title. The Ducks were red hot coming into the Pac-12 tournament, and they are expected to win a couple games in the NCAA tournament. The Ducks offense has been electric this year ranking 3rd in adjusted offensive efficiency, but a deep run will only happen if they can fix their defensive and rebounding issues. Oregon gave up a lot of wide-open shots, which Oregon State took advantage of shotting 52.6% from the three-point line and 50% from the field. The Ducks’ poor rebounding was exposed against the Beavers getting outrebounded 38-24, 12 of those being offensive rebounds for Oregon State. Oregon will have a couple of days to fix these issues and get themselves ready for a deep run in the tournament.

3) Colorado escapes a major collapse but showed flashes of dominance

The Buffaloes started off the game red hot jumping out to a 15-point lead, but they broke down to allow USC an opportunity to win. Wright IV and Horne took over the game down the stretch knocking down critical shots to help Colorado hold off the Trojans. They played one of their best halves of the season in the first half, but struggled to contain the high-powered Trojan offense in the second half. Colorado will now have the chance to win its second Pac-12 tournament since joining the Pac-12 in 2011. The Buffaloes shot lights out, knocking down 12 three-pointers against USC. The Trojans are 14th in adjusted defensive efficiency, but the Buffaloes were able to break their zone. The key takeaway from this win is how Colorado was able to respond very well when USC put the pressure on in the final five minutes of the game. This was a massive win for a surging Buffaloes team that can make a run in the tournament.