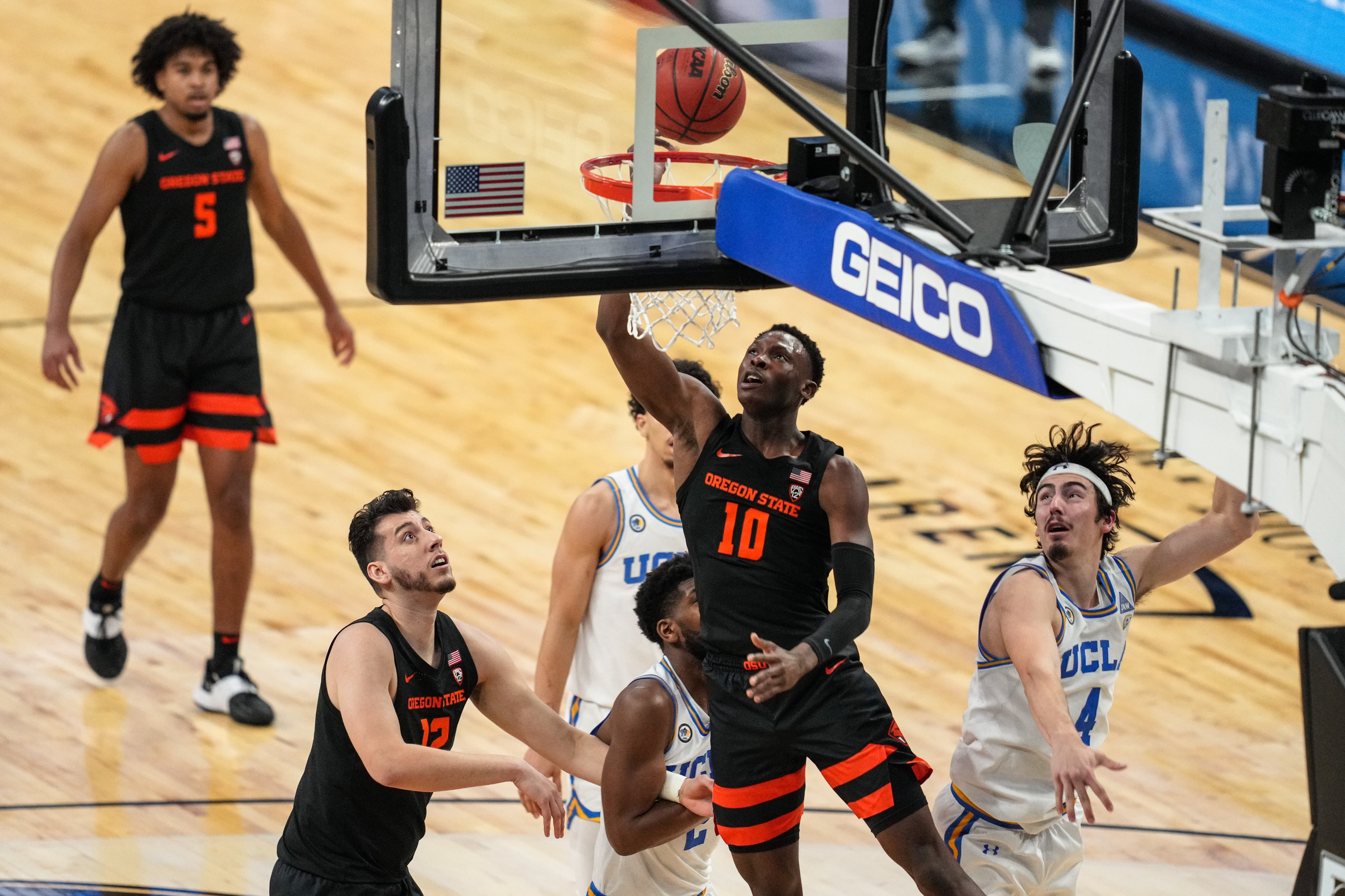 Oregon basketball, who is 20-5 on the season and 14-4 in the conference, skate by Arizona State in the Pac-12 tournament, taking down the Sun Devils 91-73. The Sun Devils Senior Alonzo Verge Jr. did not want to miss out on the dance putting up 28 points, eight rebounds, and four assists. Getting some help from Remy Martin, who added 16 points, four rebounds, and five assists. Meanwhile, the Ducks shared the ball more and were led by LJ Figueroa, who put up 21 points, four rebounds, and three assists, Will Richardson adding 17 points, seven rebounds, nine assists, and Eugene Omoruyi with 15 points, six rebounds, and two assists. If this Oregon basketball team can continue to succeed, this team should be punching its ticket to the dance and maybe seal up a Pac-12 Tournament Championship. Oregon will need to take care of the basketball as it turned the ball over ten times which is solid, but seven of those came off of steals leading to points. The Ducks will need to focus on making its free-throws making nine of the 17 opportunities. Oregon basketball efficiency was impressive, shooting 59% from the floor and 55.6% from the 3-point range. However, this Oregon team shared the ball well, having 19 assists on the 36 shots taken.

Oregon State basketball struggled throughout the year finishing 15-12 in the regular season and 10-10 in the conference. However, the Beavers beat the UCLA Bruins 83-79 in an overtime game in the Pac-12 Tournament. The Beavers shot a surprising 40% from the 3-point range going 10-for-25 from beyond the arc. Oregon State battled back from a 16-point deficit with 6 minutes left in the first half of play was able to cut in down to 10 before the half ended thanks to Jarod Lucas nailing two 3-pointers in the Pac-12 Tournament game. Lucas got a lot of help from  Warith Alatishe. Alatishe led the team in points scoring 22 points, and 10 rebounds, followed by the team’s best scoring player in  Ethan Thompson added 18 points, three rebounds, four assists, and two steals. Oregon State tied the game with 9:31 left in the game at 45 all. UCLA basketball Jules Bernard missed the front end of his two free throws with 3 seconds left, tying the game in regulation by making his second free-throw. Jules Bernard did not want to give up leading the team in scoring, but I really felt for the kid as he put up 19 points, 10 rebounds, and an assist. Unfortunately, the Bruins could not finish the game as Lucas and a surprising helper off the bench in Rodrigue Andela as he came up with a key block and making 5-of-6 free-throws in overtime in this Pac-12 Tournament game. The Beavers won 83-79 to advance to the semifinals in the Pac-12 Tournament. Oregon State plays Oregon. These teams split games in the regular season.

Oregon State defeats UCLA 83-79 in OT. @BeaverMBB had +1260 odds to win live via FanDuel late in the 1H when the Bruins led them 32-16.#GoBeavs pic.twitter.com/M9QYMLpG7s

Colorado basketball took the lead with 16:34 left in the second half and never let go of the lead in the Pac-12 Tournament quarterfinal game. The Buffs built up its lead to as much as 13 point lead. Both teams really struggled to score from 3-point range, neither shooting over 28.0% from beyond the arc. Colorado basketball had eight steals which was a huge help, and the team was led by Evan Battey, who had 15 points, five rebounds, one assist, one steal, and one block. The Buffaloes won 61-58 over the Cal Golden Bears in the Pac-12 Tournament quarterfinal game. This team will need to find its ability to score as USC and Utah lit up the scoreboard yesterday.

Jabari hits his first triple of the night 🎯

Both teams shot over 42% from the field and over 30% from the 3-point range. This game was intense, and USC basketball could not separate from the Utah Utes in the quarterfinals of the Pac-12 Tournament. A last-second foul Ian Martinez for the Utes forced the first overtime. Tahj Eaddy missing a last-second layup sent the game into a second overtime. It was time for the Pac-12 player of the year, defensive player of the year, and freshmen player of the year, Evan Mobley, to seal up the win. Mobley scored eight of the team’s last 11 points in the second overtime. Evan Mobley led the team with 26 points, nine rebounds, two assists, and five blocks. This Trojan team was able to force four of the Utah players out of the game on fouls. USC won the game 91-85 in the Pac-12 Tournament quarterfinals.

PLAY 3: @evan_mobley7 gets the board and throws it down in 2OT pic.twitter.com/zuMWEjPU0u

USC basketball will seek revenge against the Colorado Buffs as the Buffs dominated them in the regular season. Colorado basketball has yet to win by less than double digits against the Trojans in the Pac-12 Tournament. On that same note, the Buffs finished 3rd in the conference behind USC Trojans and the Oregon Ducks. These Pac-12 games will be ones to watch as both are very meaningful and should be electric.