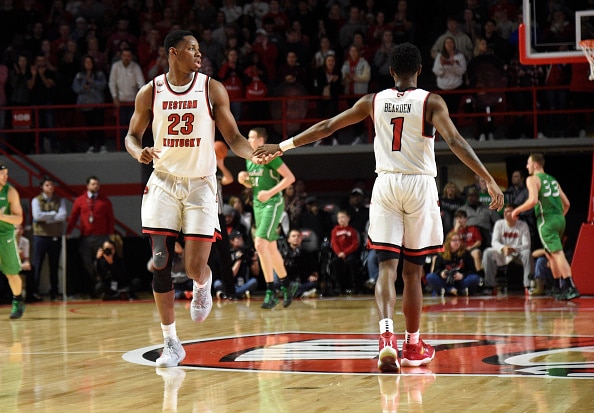 In the first semifinal matchup of the day, top-seeded Western Kentucky used a 16-7 run to distance themselves just enough to outlast UAB 64-60. Charles Bassey fought through back pain to lead the Hilltoppers with 22 points and seven rebounds. Dayvion McKnight added 13 points and nine assists to add Bassey in Western Kentucky’s victory.

Four starters scored in double figures for UAB, but the Blazers were outscored 17-4 in points off the bench. Michael Ertel led the Blazers with 16 points. Quan Jackson added 15 points, Tavin Lovan finished with 14 points, and Kassim Nicholson had 10 points in UAB’s loss.

As of this afternoon, @WKUBasketball is one of 11 programs in the country with at least 20 wins in each of the last four seasons:

In the second semifinal contest, North Texas outlasted Louisiana Tech in a stout defensive battle 54-48. It was a struggle for both teams offensively, but North Texas was able to do just enough to ear a trip to the finals. Javion Hamlet led the way for North Texas with 18 points, six rebounds, and five assists. Mardrez McBride finished with 11 points while Thomas Bell and Zachary Simmons each added 10 points.

Louisiana Tech was led by Jacolby Pemberton who finished with 12 points and Kenneth Lofton who added 10.

1) Charles Bassey Does it All

There is no denying that Charles Bassey is the star of Western Kentucky. Bassey is a force to deal with on the inside. He can defend and score, and even step out and knock down a long-range jump shot (he made two 3-pointers in today’s game).  Bassey entered the game fourth in the nation averaging 11.7 rebounds per game. He blocks over three shots a game and leads the Hilltoppers in scoring averaging 17.7 points per game. Bassey is tied for second in the nation with 15 double doubles and he performed this way today all while injured. Bassey is an NBA caliber player and unfortunately, because of injuries, we may still have not seen the full extent of what Bassey is capable of. Without Bassey, this Western Kentucky team is not here today. It’s shocking to think that Bassey is in his third year of college and hasn’t played in an NCAA tournament. He was ranked sixth at 24/7 sports in the class of 2018 behind the likes of a few pretty amazing Duke recruits. Charles Bassey and Western Kentucky have one more game to win to reach the NCAA tournament and it will be a terrible misfortune if we never get to see what Charles Bassey can do in the NCAA tournament.

North Texas won the regular season last year but unfortunately never had a chance to win the conference tournament as well after a global pandemic stopped them in their tracks. North Texas is back and they are hungry to pursue what looked to be in their grasps a season ago. After a slow start to the season, North Texas found their ground, winning nine of their first 11 conference games before dropping three straight to end the regular season. But that hasn’t stopped North Texas from making a push in the conference USA tournament where they have won two straight and are now into the finals. North Texas was poised to make a run in 2020. The Mean Green have three returning starters and four players who averaged more than 20 minutes a game, they are ready and hungry to win their first-ever Conference USA championship.

North Texas has made the Conference USA Championship Game for the first time in their eight-year membership.

Mean Green vs. WKU for the auto-bid tomorrow. #CUSA

3) NCAA Implications on the Line

Conference USA is a one-bid league this season. Western Kentucky had the best chance of earning an at-large selection to the tournament but with losses in conference play, that has become a very unlikely scenario. Western Kentucky hasn’t been to an NCAA tournament since 2013 and North Texas hasn’t been since 2010. No matter who wins the Conference USA finals a long NCAA tournament drought will be ended. The winner will earn a favorable seed as a 12 or a 13 and both teams are capable of making a run to the second weekend. There is a lot on the line moving forward in Conference USA and the finals will be an exciting contest in which the teams have not yet met this season.