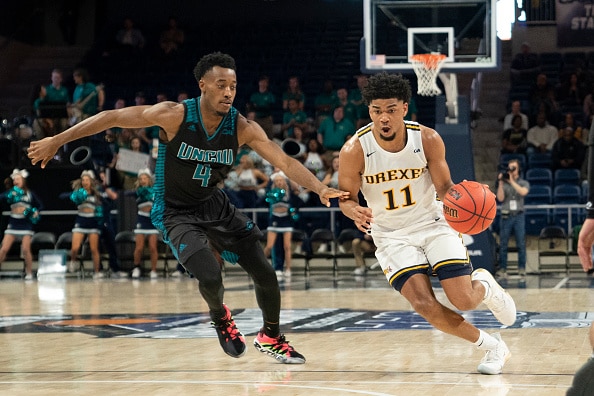 Drexel defeats Elon to win its first-ever CAA Championship, sending the Dragons to their first NCAA tournament since 1996.

After two previous trips to the CAA Championship game, Drexel finally earned the right to cut down the nets. Drexel is headed back to the NCAA tournament for the first time in 25 years where they upset Memphis in the opening round of the NCAA tournament.

Cue the celebration!! For the first time since 1996 @DrexelMBB is heading to the NCAA Tournament!

The Dragons come up huge down the stretch to take down Elon in the @CAABasketball Championship. pic.twitter.com/J7fe1ziMsF

Hunter McIntosh led the way for Elon with 19 points. Ikenna Ndugba finished the game with 16 points. McIntosh and Ndugba were the only Pheonix with more than six points in Elon’s first-ever CAA Championship game.

The two best defenses in the CAA went head-to-head in true defensive battle. Both teams entered the game allowing less than 68 points per game. Elon was the better defense entering the game but Dexel’s effecient shooting proved too much for the Phoenix. Their fourth game in four days combined with tremendous defense guarding the 3-point line inevitably proved to be the demise of Elon. Elon entered the game averaging eight made 3-point field goals per game, Drexel’s defense held Elon to only four on 21% shooting from behind the arc. Elon’s defense was tough throughout forcing 14 turnovers but couldn’t convert on the offensive end.

Drexel entered the game as the CAA’s most efficient shooting team and the second from the 3-point line. Despite having nine more trunovers and being outscored 13-5 in points off turnovers, Drexel made the most of their opportunities. Drexel moved the ball and were able to create open shots from deep. The Dragons shot 59% from the 3-point line, going 10-19 against a team that entered the game only allowing teams to shoot 30.7% against them. Drexel knocked down the open shots and fought hard to get the ball inside to create an open look from deep.

We are going DANCING! pic.twitter.com/hkLJfKc4kP

CBB Review’s Matty Brackets had the CAA champion as a 16 seed entering Monday night. It is likely that Drexel will find themselves as either a 15 or 16 seed when the tournament field is announced on Sunday. Drexel has the ability to give fits to either a one or two seed with Camren Wynter leading the way. The way Drexel can defend and control the pace while shooting the ball so efficiently the Dragons could make a case for an upset bid. Drexel will certainly have to clean up their turnovers if they want to make that happen.