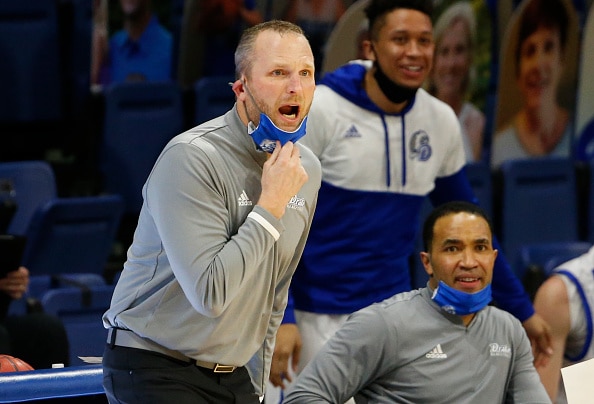 The rubber match between Loyola Chicago and Drake is set in the Missouri Valley basketball Conference Tournament Finals.

It took Drake a little more fight to reach the Missouri Valley basketball tournament finals, as it narrowly escaped Missouri State, 71-69, on a clutch layup by Joseph Yesufu with two seconds on the clock. Yesufu led the Bulldogs with 25, and Tremell Murphy contributed 20 on 80% shooting.

1) Loyola Chicago is in the driver’s seat

The Ramblers have been on fire this season, and their dominance has not disappointed in the Missouri Valley basketball tournament. Since losing to Drake on February 14, the Ramblers have won five straight games, including both tournament games by double digits.

Krutwig has been there before. He was on the teams final four roster, and it seems this team has even more talent. Although he is the only player to average more than 10 points, six other guys post seven points or more per game.

This kind of balance helps with quick layovers, and allows the team to still win if someone goes cold. Loyola Chicago is the favorite to win the championship over Drake right now.

2) Started from the bottom, now we here

Despite media criticism, Drake is still at the top of the conference with the Ramblers and are winners of six of its last seven matchups. Despite leading scorer Shanquan Hemphill being sidelined, Yesufu has stepped up, averaging 21 points in his last seven games.

Drake’s ShanQuan Hemphill (foot) will meet with his doctor on Wednesday, per Darian DeVries. If he’s cleared, his status will then be “day-to-day”.

Tonight was no different. With the game tied, Yesufu hit the clutchest shot of the year to this point, taking the 71-69 lead with two ticks left. He has become a dominant scorer, and that trend should continue in the finals against the Ramblers.

Drake will most definitely be one of two teams from the conference to make the NCAAT. Will it be via an automatic bid?

A third takeaway? Not really. But it is reasonable to give a championship prediction in a semifinals recap.

The two teams met in mid-February, splitting the series 1-1. In the first game, Loyola Chicago blew out one-loss Drake, 81-54. The next day, Drake locked down on defense, winning a narrow 51-50 matchup.

What this says is Loyola Chicago can take an offensive show out and trump Drake, while Drake will have the upper hand in a defensive battle. What does this mean for the finals? Drake has failed to hold any opponent to less than 60 points since that second matchup. For that reason, it is easy to believe the Bulldogs will rely on an offensive heavy approach.

Although I have been a huge advocate for Drake all year, it is hard to give them the win based on recent performance. Loyola Chicago takes this matchup.

The final in the Missouri Valley basketball tournament between the two teams is tomorrow, March 7, at 2:10 on CBS.