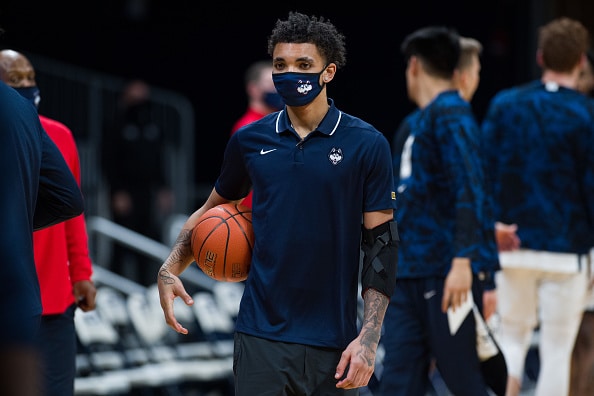 Seton Hall and Connecticut look to renew a Big East rivalry with some added intrigue for college basketball betting this time around.

One of the more under-the-radar games on Saturday’s massive college basketball card pits Seton Hall (KenPom #37) on the road to face Connecticut (KenPom #29).

Saturday presents a perfect opportunity for the Pirates to better their resume against a tough-minded Connecticut team. Fortunately for the Pirates, they get to face a James Bouknight-less Huskie bunch, as the Connecticut star guard and most utilized player will once again be sidelined with an elbow injury.

In the five games Bouknight has missed due to elbow surgery, the Huskies have gone 3-2, dropping a home contest to St. John’s and losing on the road to Creighton. Respectable losses, but with Bouknight in the lineup the Huskies may not have dropped either game; he is that important to this roster.

The Pirates are coming off a much-needed 60-43 victory over Providence on Wednesday. In the win, Seton Hall held the Friars to 34 percent shooting from the field; their defensive intensity was on display for all 40 minutes. If the Pirates want to grab the road win over Connecticut, they must limit the Huskies on the offensive glass. Connecticut is fourth nationally in offensive rebound percentage, and while they’ve had trouble getting the offense going sans-Bouknight, they are able to convert via second-chance opportunities.

Unfortunately for the Huskies, Seton Hall has the frontcourt capable of limiting the Huskies’ second-chance scoring opportunities. Back the Pirates to keep their momentum rolling with their second road win of the week.