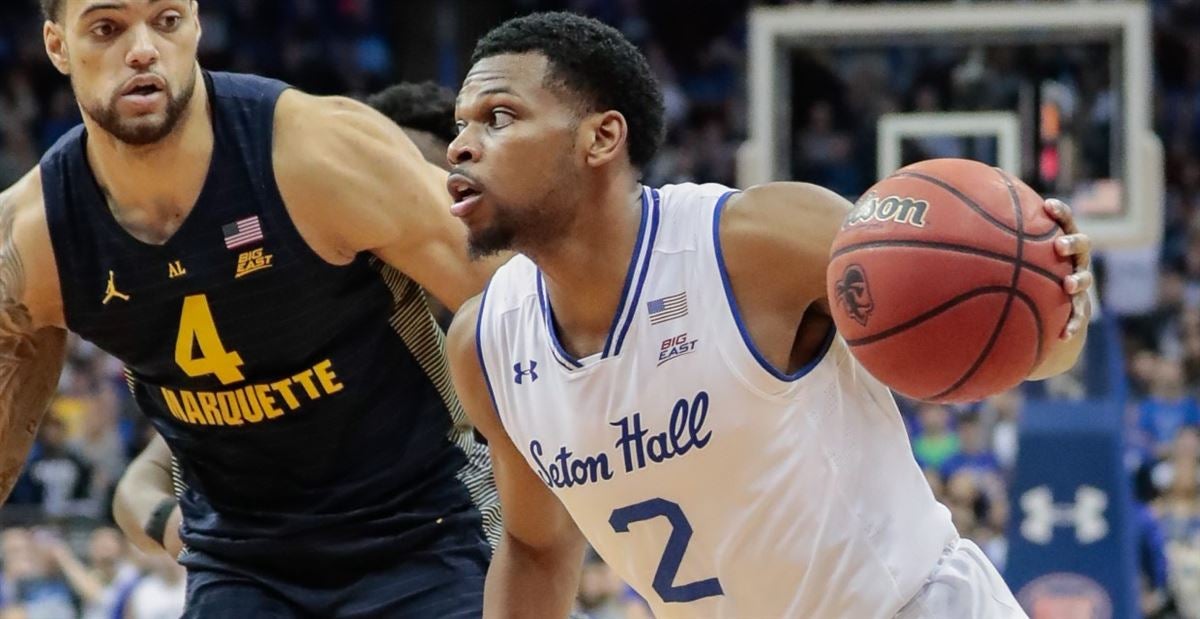 On October 24, 2017, 3-star guard Anthony Nelson committed to Seton Hall over Dayton, Cincinnati, Minnesota, and other highly-touted programs. His recruiter was Shaheen Holloway, the assistant coach at that time for the Pirates.

But Holloway would never coach Nelson, taking a head coaching job the following spring with the Saint Peter’s Peacocks. Seton Hall and Saint Peter’s have yet to schedule each other since Holloway’s departure.

But then Nelson decided to enter the transfer portal after an underwhelming sophomore season in South Orange, New Jersey, and the roster outlook not overly convincing on Nelson earning a starting role for his junior year. Nelson transferred to Manhattan – who plays in the same conference as Saint Peter’s.

So three years later, Ant Nelson and Shaheen Holloway will finally take the court together – this time on different sides of the court.

And Holloway isn’t overly excited about the reunion.

“I’m very concerned with him going into this game,” Holloway said. “He’s the type of kid that can beat you, scoring-wise and getting people involved.”

On the season, Nelson is averaging 14.4 points per game and 2.8 assists per game for Manhattan basketball. His scoring average ranks sixth in the MAAC, and he sits at 11th in assists. He and Iona’s Isaiah Ross are the only two players in the entire conference who rank inside the top-11 in both categories.

Nelson does have a turnover problem – averaging nearly four giveaways per game. Contrary to that, Saint Peter’s as a team is fourth in the conference in turnover margin, making that an interesting key for both games this week.

But aside from who wins these back-to-back games, the storyline to follow will be Ant Nelson’s play against Shaheen Holloway’s coaching. There’s something to be said about two guys who have mutual respect for each other, but still have competitive blood.

Because for all of Nelson’s praise, Holloway has done nothing but good things at St. Peter’s. Now in his third year, Holloway is 35-37. But he’s 25-15 over the last two seasons. When he missed three games due to recruiting issues from his time at Seton Hall, the Peacocks lost all three games – which shows that his coaching makes the difference more often than not.

Most recently, Holloway’s name has been brought up as a potential hire at Fordham, who recently fired Jeff Neubauer after six seasons as head coach of the Rams.

This Fordham opening is blowing my phone up. Believe it or not, long list of assistants, up and coming head coaches and former head coaches will all be in pursuit. Attractive because so many good mid-major players in NY, and program has been bad for so long. Low expectations.

But all of that aside, Holloway is focused on getting the Peacocks back on track and trying to make a late run for an NCAA Tournament berth. Standing in their way is Nelson.

“We’ve got to contain him and understand what we’re getting ourselves into,” said Holloway.

And what exactly does Nelson do well? He scores the ball, finds teammates, and plays well on the defensive end of the floor. He also has experience in big games, which means that for whatever added pressure there may be going against Holloway, Nelson will rise above.

Manhattan basketball surely got a big time playmaker when Nelson decided to transfer there. And although that may be the big story for the Jaspers on the season, the bigger one will go down this long weekend.

So on Friday and Saturday, Anthony Nelson and Shaheen Holloway will be under the limelight. It might only the from the Seton Hall faithful who care the most, but be sure to see Pirate nation pay attention to what unfolds out of what could have been.

Saint Peter’s will host Manhattan basketball for both games. Tip-off for both games are set for 8 p.m, with Friday’s action available on ESPN+ and Saturday’s game being broadcast on ESPN3.