Missouri Basketball Stays in SEC Race with win over Kentucky 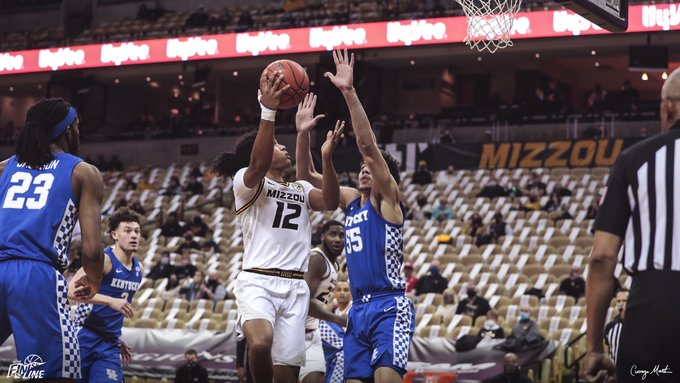 It was an important week for the Missouri basketball team if they wanted to stake claim to an SEC regular-season title. With first-place and unbeaten in league play Alabama visiting this weekend, the Tigers could ill afford a fourth SEC loss and look past Kentucky, even if the Wildcats are not the Wildcats this season. Missouri took care of business with a 75-70 win Wednesday night, improving to 12-3 and 5-3 in SEC play.

The Tigers are a veteran, skilled, and poised basketball team. What they are not, is a strong three-point shooting team. They entered their game against Kentucky making only 28% of their shots from behind the arc this season. Well, tonight Missouri basketball made seven of their 11 three-point shots in the first half to race to a 40-27 halftime lead.

Xavier Pinson and Jeremiah Tillmon had 33 points apiece in Missouri’s 102-98 win over TCU in the SEC/Big 12 Challenge over the weekend. They combined for 22 points tonight. Don’t worry Tiger fans, Dru Smith to the rescue. Smith tallied a career-high 28 points, including making 12-14 free throws, to pick up the slack. Smith tallied 17 of his 28 points in the second half, including his 12-14 showing from the line. He also added a career-best seven rebounds, while adding five assists.

3) Strong second half not enough for Kentucky

This game was a microcosm of Kentucky’s season. Start slow, make a run, have a chance to win, but fall short. Trailing by 13 at intermission, the Wildcats used a 15-3 run to start the second half, pulling within 43-42 on a BJ Boston three-pointer from the wing. It was as close as they would get the rest of the game. They did pull within 53-51 and twice within three points, including 68-65 with 4:02 left on a Davion Mintz steal and slam. However, a Mark Smith jumper, a pair of Wildcat turnovers, and four Dru Smith made free throws ballooned Missouri basketball’s lead back to nine and the Tigers cruised home with the win.

The win by Missouri basketball sets up a huge home date with Alabama on the weekend while Kentucky returns home to face Tennessee.