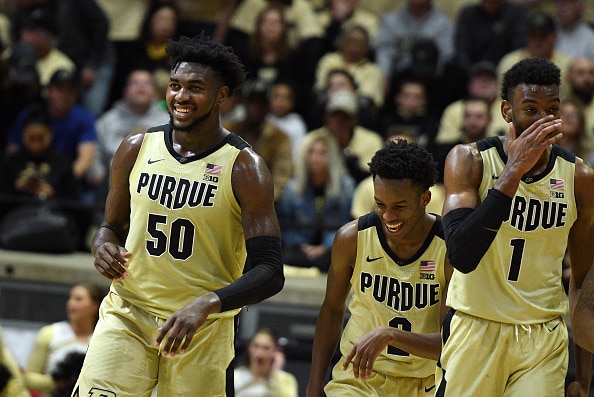 The Volunteers are a tough matchup for the Jayhawks. These two schools met a season ago in the SEC/Big 12 Challenge as Kansas narrowly escaped a previously unranked Tennessee bunch 74-68. KU’s two highest scorers in that game were —Devon Dotson (22 points) and Udoka Azubuike (18 points). Without production from last year’s stars, does KU have enough to take down the Vols in Knoxville?

Ochai Agbaji and Marcus Garrett must pick up the load lost by Dotson and Azubuike, but will it still be enough? Volunteer wing Yves Pons looks to build upon his impressive 24 point, seven-rebound performance in last season’s showdown. Tennessee has also added multiple guards capable of breaking down the KU defense in Oregon transfer Victor Bailey Jr. and highly touted freshmen Jaden Springer and Keon Johnson.

Kansas has shown some vulnerability on the offensive end of the court, only scoring 59 points in Thursday’s win over a lackluster TCU defense. Tennessee’s defense rates out as the second most efficient in D-1, and the Jayhawks will need to put together an efficient offensive performance. Rick Barnes has a bunch talented enough to notch the home win over KU.

Both Purdue and Minnesota enter Saturday night’s contest having a week off in-between games. Purdue (KenPom #30) has won four of their last five games, claiming road wins over Michigan State, Indiana, and Ohio State in the process. Their only loss in this stretch came against 4th ranked Michigan at home. The Boilermakers are a young bunch starting to play their best basketball as the season progresses and are still undervalued in the betting market.

Purdue should really be laying close to 5-6 points in this one, but because Minnesota (KenPom #32) has secured some high-profile wins this season they still garner respect in the market. With or without fans, it is tough to notch a road win inside Mackey Arena.

Purdue is the more well-rounded team and has the personnel to match up with the Golden Gophers both on the perimeter and down low. Boilermaker starting center Trevion Williams is the team’s most utilized player, as the 6’10” junior center averages almost a double-double scoring 15.3 ppg and grabbing 9.6 rebounds. Williams will be matched up with Golden Gopher center Liam Robbins, and while the two have the potential to neutralize each other, the Boilermakers also happen to have a 7’4” freshman center coming off the bench.

Zach Edey (7.9 ppg) gives Williams time to rest while still being a highly utilized player himself. Edey is second on the team in terms of player usage (24-28% of possessions used) trailing only Williams. Purdue not only has efficient big men, but their backcourt has also progressed throughout the season. Boilermaker guards Brandon Newman and Isaiah Thompson have the ability to stretch the Gophers out from three-point range, as both players shoot above 40 percent from three. Back the more complete Purdue team to get the job done at home.