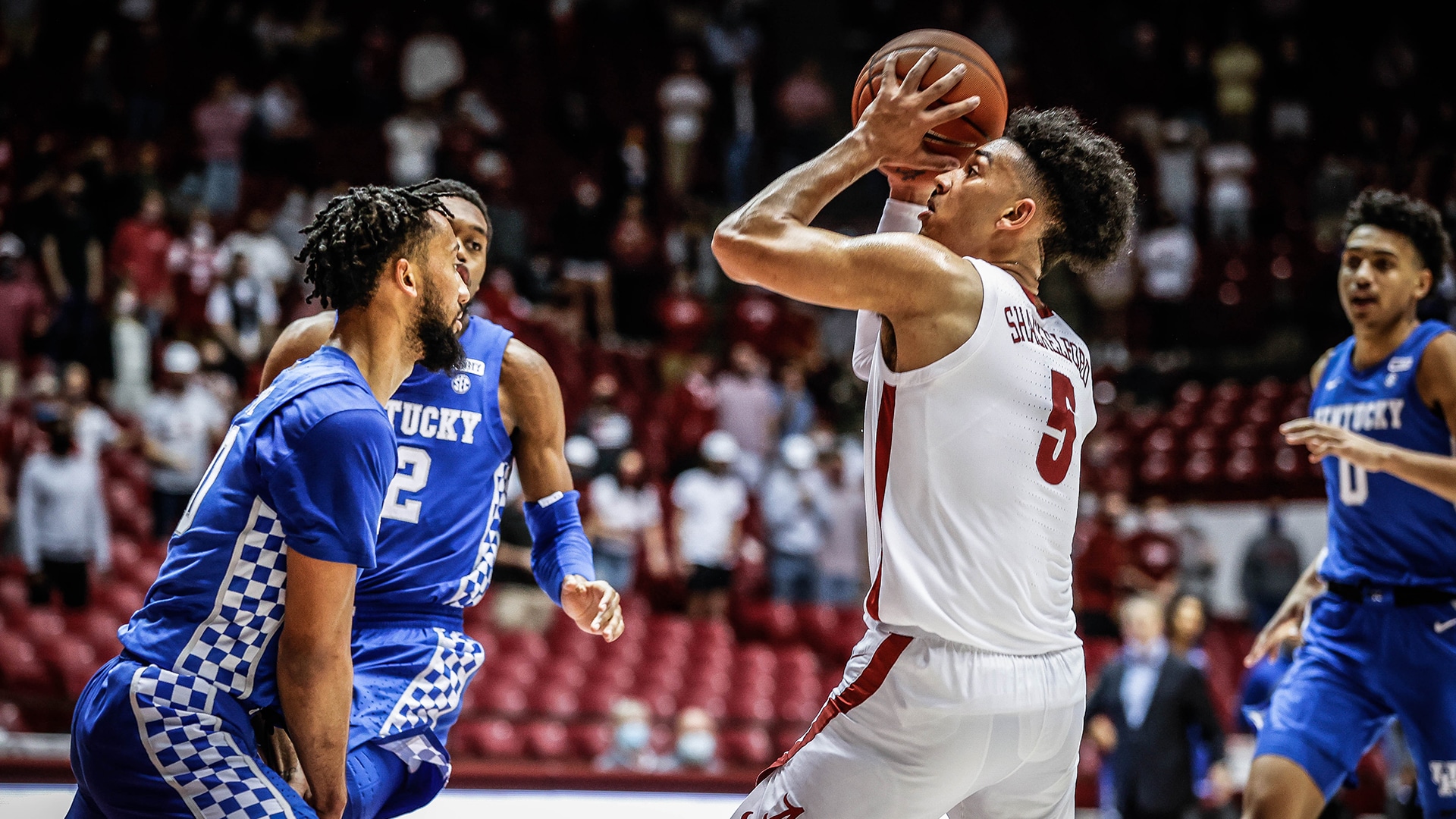 Just Like Football, The SEC Runs Through Alabama basketball

Role reversal has officially taken hold in the SEC. Alabama basketball won in a different manner than they have all year, but laid claim to being the kingpin of the SEC with a 70-59 home win over Kentucky. The Wildcats have owned the SEC for what seems as long as the conference has been in existence. That’s not the case this year. Alabama is used to playing the role of the hunter, but, like their football counterparts, they have played themselves into the role of the hunted this year.

The Alabama basketball team found itself in a battle coming down the stretch against Kentucky Tuesday night at home. The Crimson Tide did what championship level teams do. They dug in defensively, found a way to score, made their free throws, and clawed their way to a win. Trailing 54-52 following a Davion Mintz three-pointer with 4:37 left, Alabama tightened the screws defensively.

Kentucky didn’t score again until a Dontaie Allen three-ball with 42 seconds left in the game. In between, Alabama went on a 10-0 run to earn the season sweep over the Wildcats. Jaden Shackelford led the way with 21 for Alabama. This included an assist on the go-ahead layup by Juwan Gary, then made four free throws on back-to-back possessions to extend the Crimson Tide lead to 60-54 with 1:36 left.

If you look at Alabama’s season-long shooting charts, their made baskets come from two places – in the paint and beyond the three-point line. Coming into tonight, they averaged 11 long-balls per game. Tonight, they made only six of 20 from behind the arc. But still won. Why? They made 24 of 28 free throws for the game, including a perfect 10-10 in the final 1:36 to keep the Wildcats at bay. The Crimson Tide ended the game making their final 14 free throw attempts.

3) Where Does Kentucky’s Season Go From Here?

Kentucky’s season has been a major disappointment. They entered the game with a 5-9 record. The Wildcats are maybe five possessions, a couple of Olivier Saar jumpers against Notre Dame and Louisville, and a defensive stop against Georgia from being 8-6. Now, their NCAA Tournament postseason hopes will rely on winning three or four straight games at the SEC Tournament in Nashville. The Wildcats needed a signature win and a long winning streak. After throttling LSU on Saturday, a win tonight could have gone a long way. Instead, they went almost four minutes without scoring late in the game.

The Crimson Tide have now won 10 straight games and ran their SEC mark to 9-0 for only the second time in Alabama basketball history. They also swept the season series from Kentucky for the first time since the 1988-89 season Both teams will take part in the Big 12/SEC Challenge on Saturday. Alabama travels to Oklahoma, while Kentucky hosts Texas.