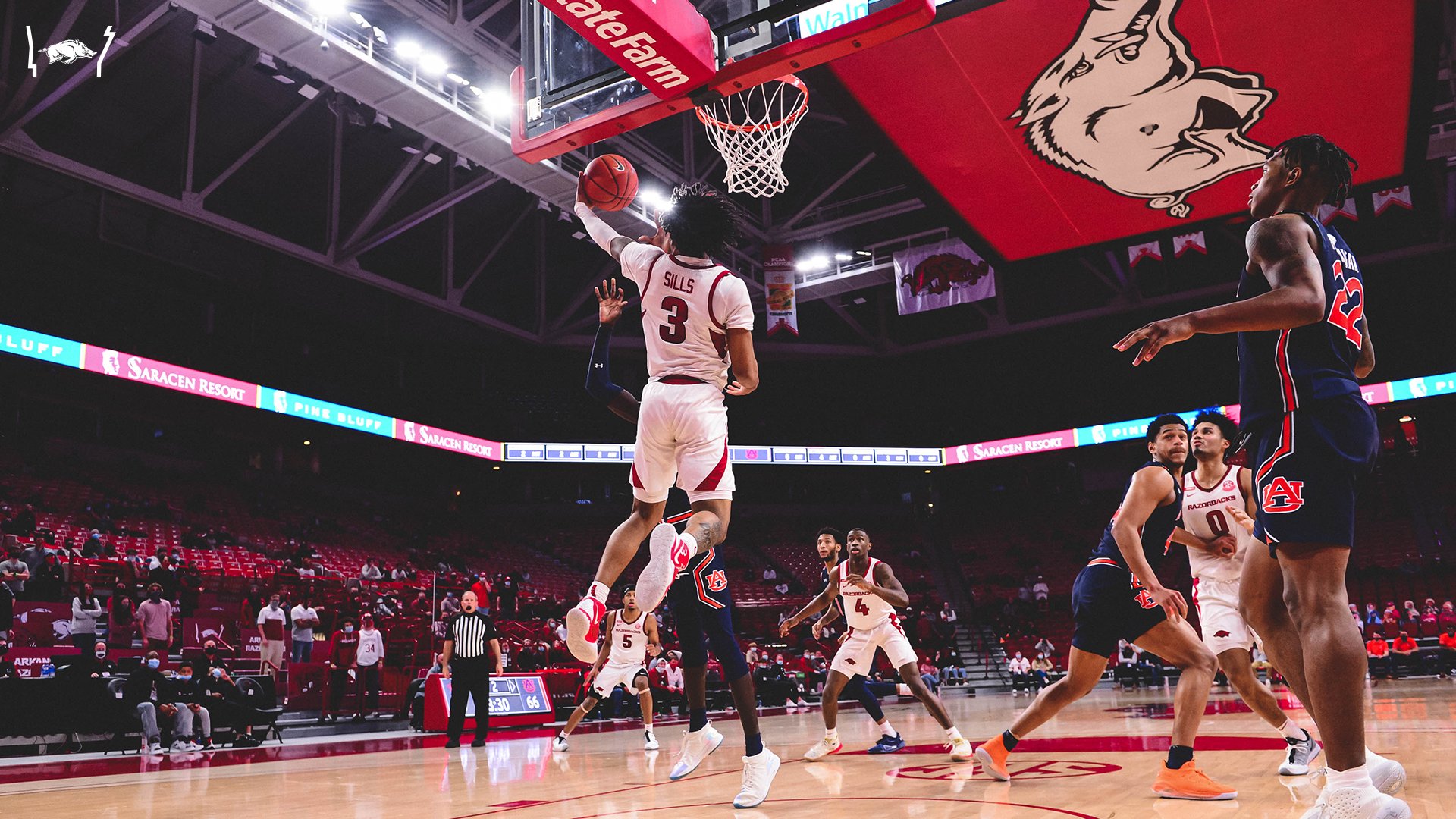 Arkansas basketball used a ferocious comeback to knock off the Auburn Tigers on Wednesday night in Fayetteville.

Wednesday night’s tilt between Arkansas basketball and Auburn basketball featured a pair of teams heading in different directions leading up to the matchup.

Auburn had won two of their last three games since the arrival of five-star freshman guard Sharife Cooper. The Tigers have a self-imposed postseason ban but still had been playing as if they were contending for a spot in the big dance.

Arkansas had lost four of their last five games, feeling the brutality of a tough January conference play schedule, but still in the thick of an NCAA tournament season.

Auburn got out to a near-20 point lead in the first half, only for Arkansas to storm back and gain control of the game throughout the final ten minutes. Auburn had a chance to tie the game with two seconds left, but an errant desperation three was the deciding factor in Wednesday night’s game.

There is a lot to unpack from the SEC showdown–here are three takeaways.

Arkansas basketball was among the top offensive squads in the SEC last season, a trend that has carried into Eric Musselman’s second season at the helm for the Razorbacks.

With high-octane shooters such as Moses Moody, Desi Sills, and Jalen Tate, one would expect Arkansas to live and die by the three-point shot.

However, even though they spent almost ten minutes of the game down by 15-plus points, the Razorbacks did not veer away from their initial game plan of getting their offense from driving to the rim.

The Razorbacks still attempted 15 threes, which could become an area of improvement down the stretch of conference play. This was the win that they needed to get back on track, and if the three-ball can begin to fall, Arkansas could catch fire at the right time.

2) Sharife Cooper can do most things, but Auburn needs production from everyone in order to win consistently

Before the arrival of Sharife Cooper, who missed all of the non-conference play due to ineligibility, this was easily the worst Auburn team on paper in years.

However, since adding Cooper, the Tigers have been far more potent on offense and have been playing with more energy. In his first four games including Wednesday’s game, Cooper is averaging 22 points, four rebounds, and eight assists. It’s a shame that we won’t be able to see Cooper in the NCAA tournament this March.

Cooper had another signature performance on Wednesday night, dropping a game-high 25 points, four rebounds, and four assists. The problem? Only one other Tiger, J.T. Thor, finished in double digits.

Bruce Pearl likely has no problem with Cooper putting up huge numbers like his aforementioned stat line, as he simply is not the problem. The problem is that so far this season, Auburn has yet to see their entire starting five click.

This is a pretty thin Auburn team as is, but the Tigers will need to see more than one point out of Devin Cambridge if they’re going to pick up some meaningful wins in a lost season.

3) Arkansas’ “Next Man Up” Mentality will take them far

Two of Arkansas’ top newcomers this season have been Moses Moody and Connor Vanover. Moody has been among the SEC’s top freshmen, averaging 17 points, six rebounds, and two assists on the season, while Vanover is averaging seven points and six rebounds.

However, neither of the two had particularly impressive showings on Wednesday, as Moody had just 5 points in the 32 minutes, while Vanover had two points in nine minutes.

Obviously, neither of the two poor showings mattered, as the Razorbacks won behind big games from Sills and Tate. As the Razorbacks head down the stretch of SEC conference play, their ability to utilize their depth will be a crucial factor in them earning an NCAA Tournament booth.

Moody and Vanover will continue to produce as they have been throughout the season, but the emergence of Sills and Tate in a must-win game was impressive and could signify a turning point of the season for Arkansas basketball.