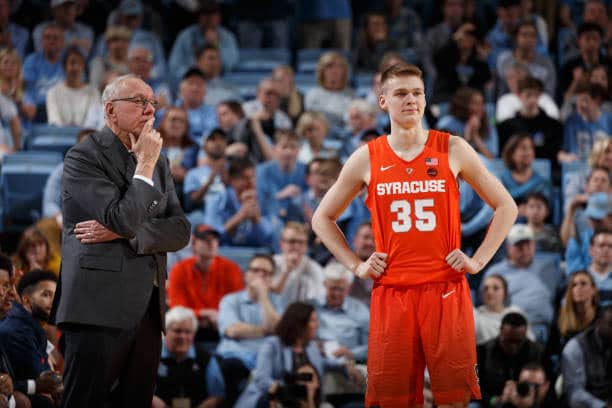 Syracuse basketball fought hard for an easy upset win – one that may have the Orange heading in the right direction.

Syracuse basketball earned its ninth win of the season, now sitting at 9-4 overall and 3-3 in the ACC. It did it at home over No. 16 Virginia Tech, a team already with wins over Villanova, Clemson, and Duke, among others. But inside the Dome, it was the rebounding and inside play of Syracuse that prevailed.

Quincy Guerrier led the way for the Cuse with 20 points and 9 rebounds. But the 78 to 60 victory in favor of Syracuse basketball wasn’t just on the shoulders of Guerrier. Marek Dolezaj added 18 points and Alan Griffin had a 15 point, 10 rebound double-double. Kadary Richmond a short bench with 13 points on 5-of-6 shooting.

For Virginia Tech, it was Nahiem Alleyne with 20 points on five threes. But Alleyne didn’t get much help elsewhere, with the rest of the Hokies combining for just 40 points on 14-of-44 shooting from the field. Even Alleyne, who went 5-of-10 from behind the arc, struggled from two, hitting just one shot on seven attempts inside the three-point line.

But the game means more than just an upset in the ACC. Rather, it puts Virginia Tech at a point where it needs to string together more wins. The Hokies are banking off of victories against Villanova and Clemson, but the Tigers have been struggling as of late. Syracuse earned its best win of the season against Virginia Tech, and will a chance to keep the momentum going against nationally-ranked Virginia on Monday.

1) Syracuse basketball is improving on defense

Exactly one week ago, Syracuse basketball head coach Jim Boeheim was quoted as saying the SU defense was “The worst I’ve seen since I’ve been here.” That came after a brutal loss to Pittsburgh, in which the Orange 64 second-half points, losing 96 to 76.

Well since then, Syracuse has wins over Miami and Virginia Tech, and in both games, the Orange haven’t allowed over 60 points and have limited its opponents to under 40% from the field.

A lot of that has been in part to Syracuse’s improvements on the glass. The Orange is rebounding much better, which in turn has allowed for better consistency on offense. Less giving up second-chance points seems to have benefitted Syracuse’s transition offense, which allows for more time spent on focusing on defense, and less on the offensive side of the ball, which SU is already very polished in.

Virginia Tech is a really good basketball team that doesn’t get the credit it deserves. But sometimes they have games like this one where they don’t prove that.

This may seem like a contradiction but stay with me. The Hokies are 11-3 and 5-2 in the ACC. Its only losses before Syracuse were to Penn State by 20 and an away game to Louisville by two. Of course, the Penn State loss isn’t great, but the Nittany Lions do have one of the top offenses in the country. The Cards are good in their own right and no one should shame a team for an in-conference away loss to a tough competitor by two.

But on the contrary, two losses by a combined 38 points – both to unranked teams – doesn’t do its best to earn the absolute respect of college basketball savants.

In short, Virginia Tech has talent, but some of these losses are head-scratchers. They’ll have a chance against Virginia on January 30 to turn that around.

3) The ceiling for Syracuse basketball is still very high

The Orange won’t get a much higher projection than a 10-seed at the moment. But with no really bad losses and trending up, don’t be surprised if Syracuse makes a run at a six or seven seed by the end of the season.

Syracuse doesn’t have a whole lot of chances left for big wins, but it does have upcoming games against Virginia, Clemson, Louisville, Duke, and North Carolina, before the ACC Tournament.

So while it’s not a schedule with all sorts of top-25 matchups, there are still one or two left, with plenty of other chances for regular quality wins.

Monday’s match-up against the Cavaliers would be another big-time win to separate the Orange. But for now, the win over the Hokies should calm the nerves of Orange fans.