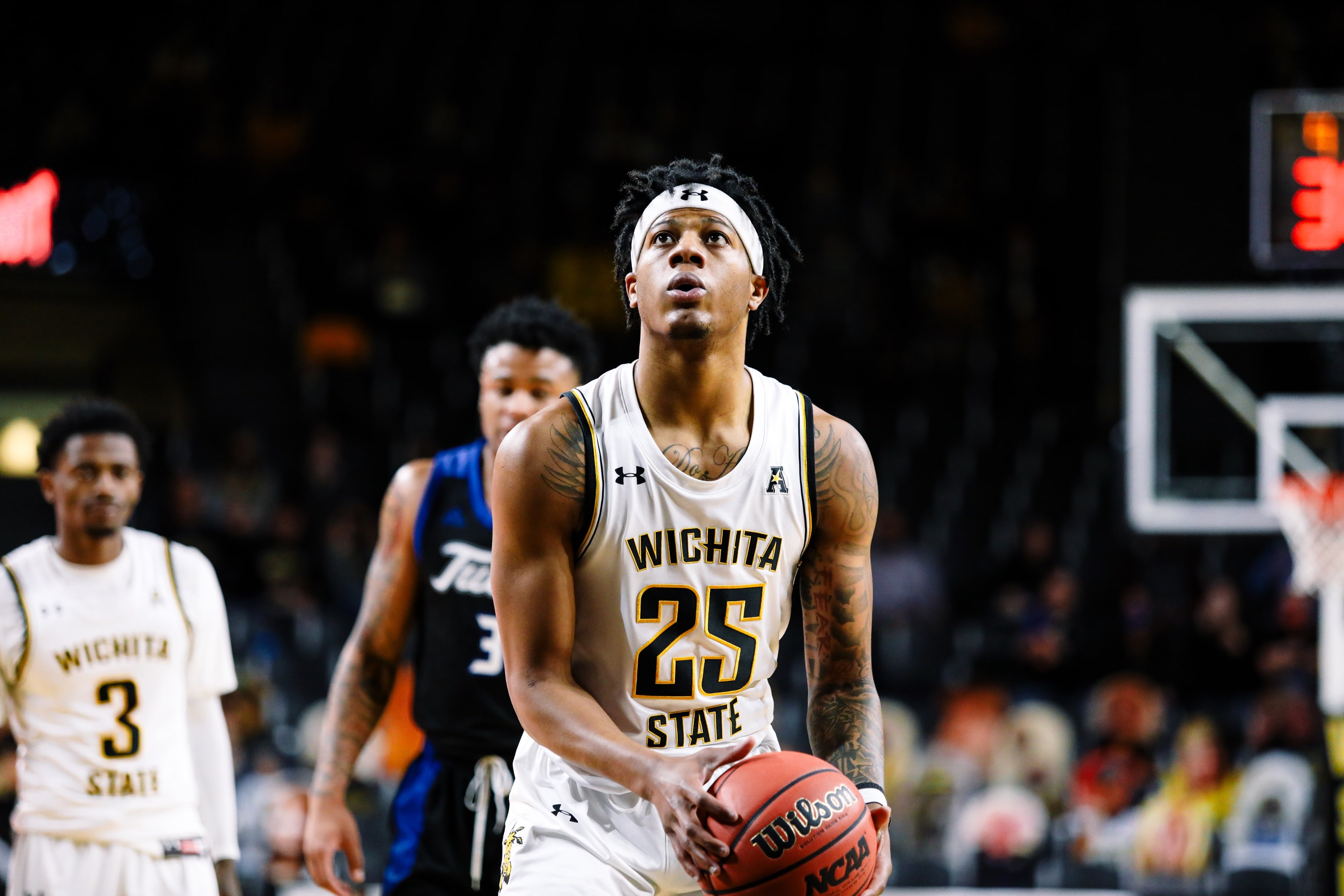 Wichita State basketball took down Tulsa with ease in a game that was supposed to be close on paper.

Wichita State basketball defeated Tulsa 72-53. The Shockers swept the Golden Hurricanes. This is a big win for Wichita State as Tulsa is currently the lone loss in conference play for the Houston Cougars.

The Tulsa Golden Hurricanes were led in rebounds and assists by a not common player in Darien Jackson, a Kansas native, who put up 12 points and nine rebounds. Elijah Joiner was a close second in points putting up 11, while Brandon Rachal was second in rebounds. Rachal struggled to score, going 2-for-15 from the floor and 1-of-7 from 3-point range.

Isaac Brown is now 8-3 as the interim at Wichita State after tonight’s win against Tulsa.

Brown has done one heck of a job after dealing with the Gregg Marshall aftermath, and also a major roster overhaul this past offseason.

Wichita State basketball defeated Tulsa due to the Shockers’ excellent defense and abysmal shooting by the Golden Hurricanes. Tulsa shot 13.8% from three and 33.3% from the floor. Meanwhile, Wichita State shot 41.8% from the field and 37.9% from three. There were some huge steps in very different directions from each team. The Shockers were surprised with intense defense and establishing a big man.

Tulsa may have found a threat in Darien Jackson and has shown that the Golden Hurricanes can lose if Brandon Rachal isn’t hitting his shots. The Shockers led the entire game. Coach Frank Haith has some work to do to help move this team along, and Coach Isaac Brown is doing an excellent job keeping the team focused with the loss of Gregg Marshall and the loss of many starters from last year.

30 minutes after Wichita State improved to 4-1 in the conference, a half-game back from first, there’s 4 players already back on the court here at Koch Arena working on their games. pic.twitter.com/2NprveAoIt

1) Each team needs to play their game

Tulsa is known for slowing the game down. In the first half, the team was sped up in all phases all the game. The defense showed up for the Shockers, who hounded the Golden Hurricanes. Wichita State basketball defeats Tulsa by keeping the leading scorer for the team, Brandon Rachal, to two-of-fifteen from the floor. Dexter Dennis does such amazing defensive work against opposing team scorers. He was the main defender against Rachal. Elijah Joiner is the next highest scorer and is 6.6 points less coming into the game at 9.2 points to Rachal 15.8.

The Shockers also switched up defenses and showed pressures and zones, all throwing off the Golden Hurricanes in the first half of play. This intense defense for the Shockers had the Hurricanes taking poor shots and making poor passes. Wichita State men’s basketball went back to what it had been known for in the past and dominated the boards.

Wichita State basketball defeated Tulsa by outrebounding the Golden Hurricanes by six. Seven of the Shockers’ rebounds were offensive, which led to five-second chance points to Tulsa’s two-second chance points. Wichita State also limited its fouls in the first half of the play. The Shockers made it to the free-throw line five times and made three of them, while Tulsa never made it to the charity stripe.

𝐓𝐎𝐌𝐎𝐑𝐑𝐎𝐖❗Watch @TUMBasketball as they head to Wichita State with a 6️⃣ GAME WIN STREAK 🔥 on ESPN+ at 6:00 PM CST 🏀 pic.twitter.com/JO5e1bJNy3

2) Tulsa needs to be aggressive

Wichita State basketball defeated Tulsa due to Tulsa’s inability to drive the ball, create shots, and putting all the weight on Brandon Rachal. Living and dying by the three, this is what Tulsa men’s basketball is known for. I was hoping that this would change with Rey Idowu’s addition, but his struggles scoring and not being assertive has hurt the team. This was a worry as he came from the Missouri Valley Conference and changed to being a scorer. Idowu needs to continue to grow and should be a great player next year if he can do these two things. With this in mind, the team showed times of getting penetration, and Idowu had the chance at shots but couldn’t finish them.

In the second half, the Tulsa Golden Hurricanes came clawing back and played their game. This brought the team within 6 as the Tulsa men’s basketball team took on its role, slowing down the game and increasing defensive intensity. The team was able to get some second-chance points and active hands, causing turnovers. Doing all of this, the Golden Hurricanes made it an interesting game. The biggest surprise is after an injury to Craig Porter, Trevin Wade came in and was a menace. The depth that this team has at point guard is a huge asset to the team. While he didn’t score or show much on the stat sheet, he is someone to watch.

The AAC Freshman of the Week balled out again. 👌

After the huge loss last year, Jaime Echenique was the clear big man getting spelled by the battalion of  Morris Udeze, Isaiah Poor Bear Chandler, and Asbjorn Midtgaard. After a slow start, there seemed to be signs of life in their last game as Morris Udeze had his career-best 18 points. Wichita State defeats Tulsa. Morris Udeze led the team with 20 points, followed closely by Tyson Etienne. Udeze also led in rebounds for the Shockers with 8, followed by Trey Wade. If Udeze can continue to play like this and limit his fouls, this would really help the Wichita State offense. Having the skill down low while also having some excellent shooters on the perimeter will cause issues for teams.

Is Wichita State the second-best team in the American Athletic Conference behind Houston? Starting to look like it's a real possibility. Shockers over Tulsa by 19.