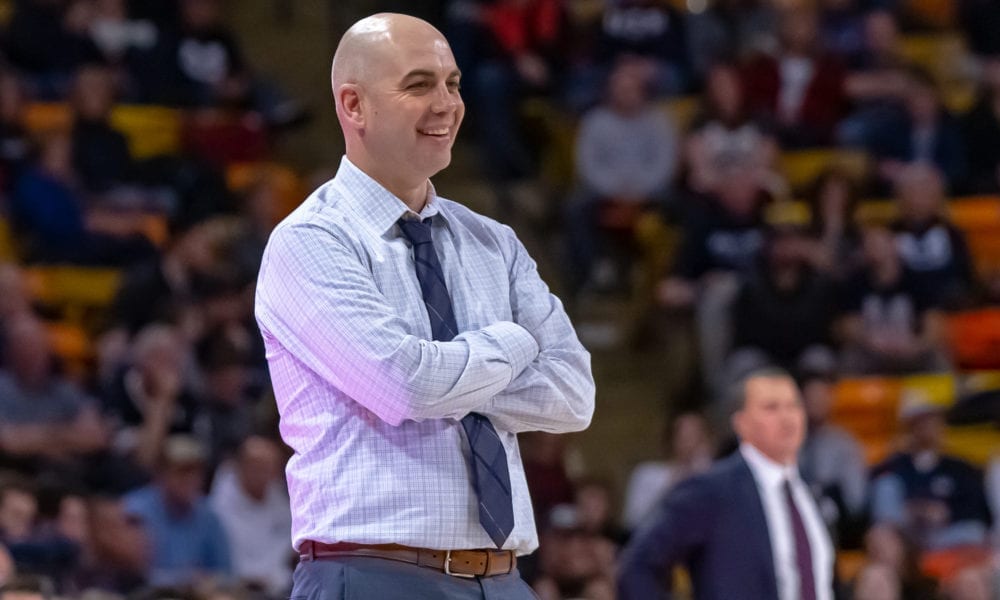 Utah State basketball backed up its 6-0 record in the Mountain West with a win over San Diego State.

Arguably, the top couple of teams in the conference faced off tonight in a highly anticipated game. Ultimately, Utah State basketball came out on top, with defense being the emphasis. The final score of the game was 57 to 45, making it three straight games that the Aggies have held opponents to under 50 points.

Giving up sub 50 points in any game is very impressive, but against a very strong San Diego State team is unreal. Utah State’s defense swarms, rebounds, and are super tenacious. They caused the Aztecs to have 16 turnovers and limited them to 31% from the field.

In addition, SDSU only shot 23.8% from the three-point line. One big factor is the way the Aggies play their man defense. They talk a lot, switch, and never over pursue on the ball, making it very hard for their opponents to create a strong offense. This Utah State defense is the real deal.

2) Neemias Quieta is a big time player down low

This kid is a flat out stud. An easy double-double for him, as he ended with 14 points and 16 rebounds. He had 5 offensive rebounds as well, no one can really guard him on the glass. He is that good. On offense, his presence in the paint is unreal, and on defense, he will be anywhere to grab the basketball.

Quieta is the glue guy for Utah State, the offense runs through him, and he makes it much more fluid. He draws defenders and he also has the ability to dish the ball. He is a good passer, who finds the open player, and makes Utah State basketball flow on offense.

3.) San Diego State is good, but there are question marks

The most important question of the night is Matt Mitchell. He went down late in the second half, and currently, it’s a knee injury. He is by far the most important player for SDSU. The senior, the captain, the leader, they need him more than ever right now. He is the guy who they look for when the ball isn’t going in the net.

Good news for San Diego State fans – the matchup will be back in less than 48 hours. It was a huge win for Utah State basketball, and this game on Saturday is going to be fun.