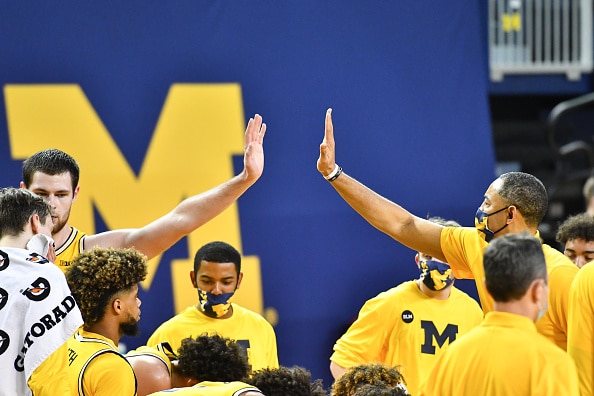 #6 Michigan basketball dominated #9 Wisconsin from the opening tip on, improving to 11-0 on the season with a 77-54 smacking of the Badgers.

Michigan shot over 50 percent from the field while holding Wisconsin to 30 percent shooting on the night. The Wolverines went on an impressive 43-6 run from the end of the first half into the second to cement their lead.

1) The Wolverines set and controlled the pace

Michigan’s ability to speed Wisconsin up and play at a pace more comfortable for the Wolverines allowed them to get to 77 points on the night. Wisconsin came into Tuesday’s contest 336th nationally in adjusted tempo per KenPom and was unable to play their type of half-court, grind it out game.

Michigan had four players score double digits, and their seven-man rotation can go toe to toe with most, if it all teams in the country. The Wolverines were happy to welcome back senior forward Austin Davis. Davis logged 12 minutes and his presence bolsters an already talented Wolverine frontcourt.

3) Michigan is the team to beat in the Big Ten

Michigan (11-0, 6-0) proved they are worthy of a top ten ranking and with a win over Minnesota on Sunday, will likely vault into the top five. This team has all the makings of a roster capable of winning multiple games in March. The Wolverines look to stay atop the Big Ten and keep their undefeated record intact. Juwan Howard has his guys playing inspired basketball, it’s unfortunate the Crisler Center could not be packed with fans on a night like tonight.