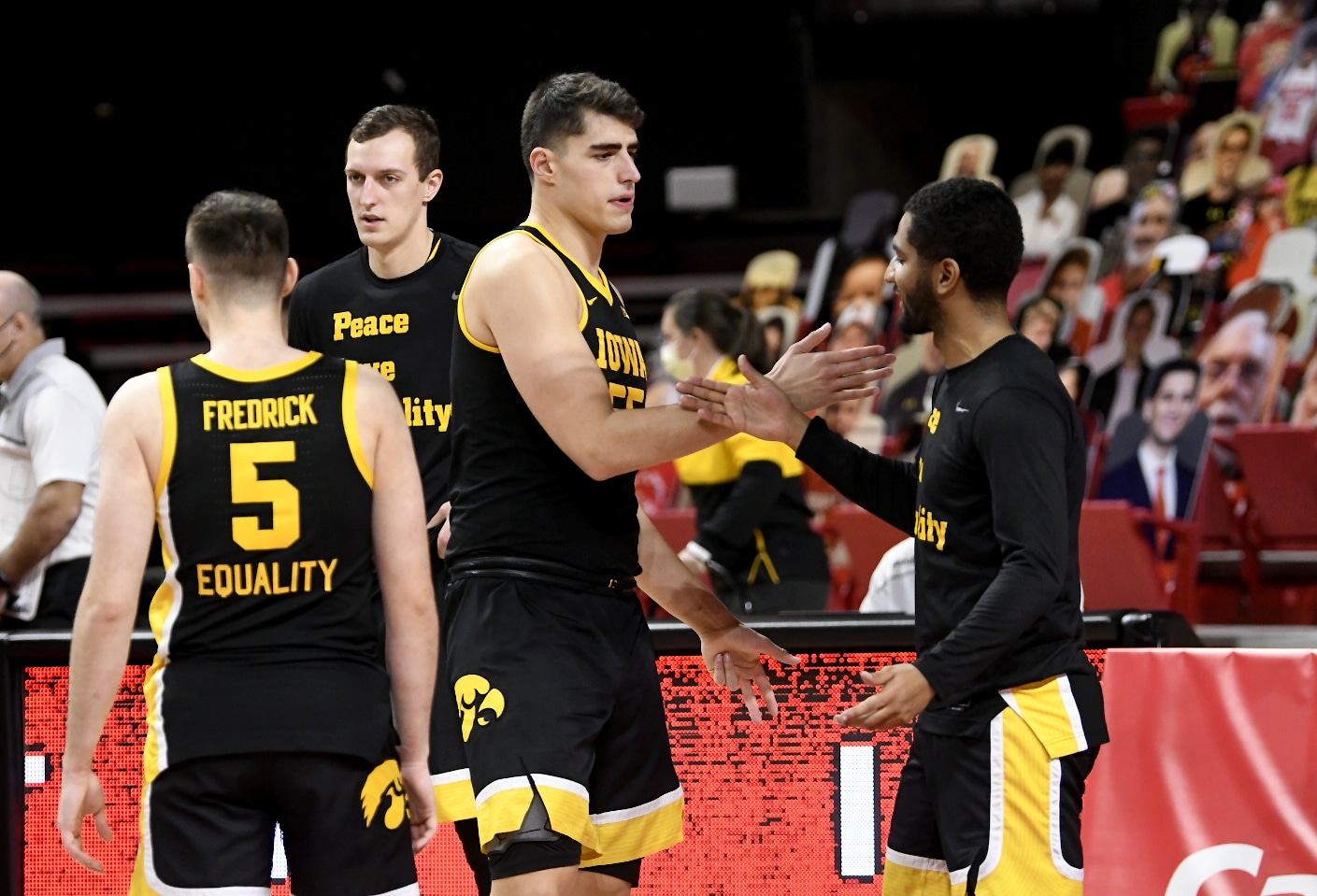 Iowa basketball survived a punch in the mouth before looking like themselves on Thursday.

Iowa basketball looked like they were going to be on upset alert early in College Park. However, after an irate Fran McCaffrey burned two timeouts in five minutes, the Hawkeyes found their groove on their way to an 89 to 67 victory over the Maryland Terrapins. Luka Garza was fantastic once more, scoring 24 points while continuing to make a strong case for national player of the year honors.

1) Iowa’s defense, not their offense, sparked their victory

Much has been made about Iowa’s ability to play quality defense this season. It’s a big talking point when pundits start discussing the legitimacy of the Hawkeyes as a Final Four and National Title contender. Perhaps tonight was the kind of game Iowa needed to kick start their effort on that end of the floor.

Maryland came out firing, and it appeared it would more of the same where Iowa would need to rely on their fantastic offense to win a shootout. However, after facing a deficit of 19-9, the Hawkeyes ripped off 20 straight points to create their own 10-point advantage. That run was sparked by a zone defense that tied Maryland’s hands offensively. The Terrapins had no clue how to get the ball inside, forcing up poor shots from deep and turning the ball over five times in that span.

The intensity on defensed didn’t die down once the Hawkeyes had that comfortable lead either. Iowa defended tough all the way through the final buzzer. The kind of defensive effort they showed tonight is what it’s going to take to be taken seriously in national title conversations. Tonight was good, but Iowa still needs to show that they can defend like this against better teams.

2) Maryland doesn’t have a go-to guy

The departures of Anthony Cowan and Jalen Smith were expected after last season. However, the roles they played for the Terps are becoming more evident this season. Everyone else on last season’s team had a role they played as things ran through Cowan and Smith offensively. Almost all of the role players are back, but seemingly without their roles.

This became clear during the drought that put the game out of reach for Maryland for the final 14 minutes of the first half. Iowa’s defense suffocated Maryland, but nobody seemed ready to step up and be the guy to try and offer any resistance. Situations like this normally would’ve seen Cowan drive hard to the basket or Smith find a way to throw down a thunderous dunk. Instead, lazy shot attempts were being forced and confusion abounded as Maryland quickly threw out the momentum they built up out of the gate.

Perhaps this is the role Darryl Morsell should take as the best senior on the team. However, it was a pleasant surprise just to see him get any minutes at all after requiring surgery for a facial fracture suffered against Michigan on New Year’s Eve. Donta Scott is the other candidate here, and he seemed to be the only guy giving maximum effort by game’s end. Regardless, until this gets solved, Maryland will struggle to close out games or overcome adversity during the rest of league play.

Many projections for the NCAA Tournament have the Big Ten teetering between 10 and 11 teams in at the moment. That’s great for the league, but not for the three teams that are on the outside looking in. The league’s rise over the last few seasons means that there are few, if any, nights off once the bright lights come on. For Maryland, Penn State, and Nebraska, that means long winter nights are going to be even longer for them.

There was hope that after Maryland upset Wisconsin in Madison that the Terps might have some fight in them after all. Instead, they’ve now dropped three straight against Michigan, Indiana, and Iowa. Furthermore, they have the only Big Ten win of the three teams sitting at the bottom of the standings right now. Maryland and Penn State still appear to be steps ahead of even Nebraska, but the fact remains that these are the clear three bottom teams. Unfortunately for fans of those schools, that means double-digit league losses is almost a guarantee.