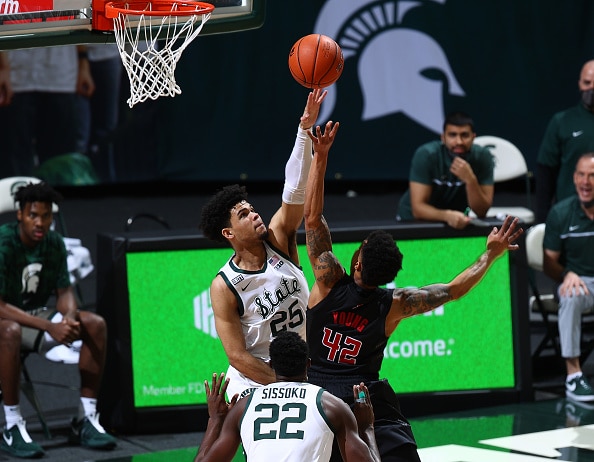 Rutgers struggled mightily from the floor, shooting 30.5% and 25% from deep. The Scarlet Knights also shot an abysmal 35.3% from the charity stripe.

Although Michigan State struggled taking care of the basketball (18 turnovers), it shot 47% from the field, including six made three pointers, and added 16 free throws on Rutgers 16 fouls in the game.

1. An off day in the big ten is a guaranteed loss

Rutgers proved today that even the best teams in the conference cannot get away with a poor night. Michigan State, who had just lost their last three out of four games, jumped on a struggling Rutgers team early and dominated throughout. The Big Ten is so loaded that any team can win on any night, and no team is safe from a drubbing. Rutgers proved that tonight, not being able to get away with a win on a poor night.

2. Michigan State is a momentum team

After a rough stretch of three losses to kick off conference play, the Spartans defeated Nebraska by seven on the road and came back home to stomp the fifteenth ranked team by 23. In the three losses, Aaron Henry did not score more than 12 points in a game. In the two wins, he averaged 23.5 points. Michigan State hosts a tough Purdue squad on Friday before traveling to Iowa for a difficult matchup with Luka Garza and co.

3. Free throws are free for a reason

Rutgers went 6-17 from the line tonight, which is a big reason for the blowout. There is a great team in New Brunswick, but how far can they go without taking advantage of free opportunities? The Scarlet Knights shot 60% from the line before tonight. That is not a figure for a team that hopes to make a run in the postseason. Either they figure out their shooting woes, or it will be a short March for Rutgers.

Rutgers hosts a revenge game versus Ohio State on Saturday, and then travels to Happy Valley to face off with a bottom tier Big Ten team in Penn State. Rutgers’ next ranked matchup is next Saturday against Wisconsin at the RAC.

Michigan State hosts Purdue, which will be tricky in regards to matching up with the Boilermakers elite frontcourt. The Spartans then have their toughest test to date, traveling to Iowa to take on the fifth ranked Hawkeyes.