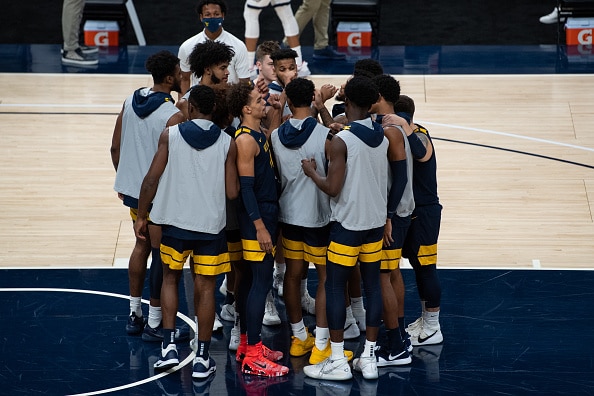 Richmond vs West Virginia showed just how good the Mountaineers can be.

Richmond vs West Virginia was expected to be a great game between two top-20 teams. However, West Virginia played a complete game, especially in the first half, to squash the Spiders 87-71. Miles McBride led the way for the Mountaineers with 20 points, though four others scored in double-figures as well. Richmond had three double-figure scorers, led by Nathan Cayo.

Richmond hung around in this game for the first 12 minutes. However, once Bob Huggins put the press on, things got out of hand in a hurry. The Mountaineers finished the final three-and-a-half minutes of the first half on a 15-3 run, opening up a 52-30 lead at halftime. Everything came together for WVU, shooting 65.7 percent from the field in the first half and 6-of-9 from three. Bob Huggins’ squad came into the game last in the Big 12 in both categories, but lit up the gym today, finishing 58 percent from the field for the game and 57 percent from deep.

On top of the offensive success, West Virginia’s defense shined as well. They forced 16 Spider turnovers total, with 12 of those coming in the first half. That led to 15 points off turnovers in the half and 19 overall. The bottom line is that the Mountaineers played a complete game. If they can turn in more performances like this throughout the season, they will have a real chance to push Baylor and Kansas for a Big 12 title. This game could be the catalyst for that.

Richmond already came into the season down a key man when Nick Sherod tore his ACL in the pre-season. Cayo has done a great job filling that slot, but that also put the Spiders in a tougher place in terms of their bench. Richmond’s starting five played 166 of the team’s 200 recorded minutes in this game, and were making up 77 percent of the team’s minutes on the season heading into the game. They lost the battle of bench points today, scoring just 15 to West Virginia’s 27. On a day when the starters really struggled to find their shot, that’s bad news.

This early in the season, many teams are still trying to figure the formula that works best for them, and the Spiders are no different. Being the Atlantic 10’s pre-season favorite will put the target on their back in league play as well. Chris Mooney’s team will be battle-tested, but weary legs could doom them as they get deep into conference play. If Richmond is looking to be a mid-major darling in March, they will have to trust the guys coming off the pine and get production from them.

3. Jacob Gilyard is one of the Best Defenders in the Country

Not much went Richmond’s way in this game, but there was one constant. Jacob Gilyard continues to be a top-level defender, and it’s time he gets national recognition. Listed at just 5’9″, Gilyard is rarely going to be able to put a hand in anyone’s face when they pull up for a shot. However, he makes up for it by picking opponent’s pockets and hounding them constantly at the top of the key. Gilyard recorded four steals in this game, giving him four straight games with at least four steals. That kind of defense from him will typically spark the Spiders and get them some quick buckets. Even with this setback, Richmond should remain nationally relevant throughout the season, and that will be in part because of Gilyard’s defensive ability. He proved today that he can defend anyone, whether it’s a power team or a mid-major.