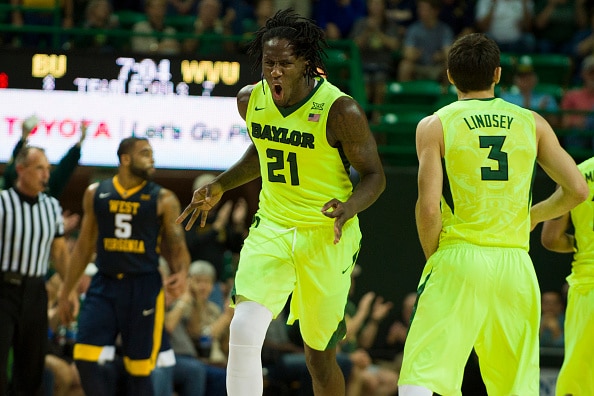 Scott Drew has turned Baylor basketball into a feared program. With No. 1 Gonzaga on Saturday, we look at the most hyped non-conference games in their history.

A 20th ranked Baylor basketball team faced off against No. 3 Kentucky in a rematch from a year earlier when the Bears shocked the Wildcats at Rupp Arena. This time, it was a Baylor team ranked in the preseason poll, whose only loss to this point came against No. 8 Syracuse in the Maui Invitational Championship Game.

The Wildcats featured seven future NBA players, including Julius Randle and Willie Cauley-Stein. However, a strong Baylor defense held the Cats to just 21 made field goals all game. The Bears used their inside game to wreak havoc, with big men Isaiah Austin and Cory Jefferson combining for 26 points and 14 rebounds. Austin added five blocks to the defensive effort.

The Cats played down for most of the first half, as Baylor sprinted out of the gates to an early 16 to 7 lead. But Kentucky took the lead right before halftime and eventually held a nine-point lead with 13 minutes to go. But Baylor Basketball went on a 26 to 12 run to end the game, winning 67 to 62.

The win was one of three that came against ranked opponents for Baylor that year. But it was by far the highlight of the season as the Bears were defeated in the Sweet 16 by Wisconsin.

Scott Drew’s team of Pierre Jackson, Quincy Acy, Perry Jones, and countless others came into this late December game fresh off an overtime win against West Virginia. The 12-0 Bears were ranked seventh in the nation and faced a tough Mississippi State team ranked 14th.

Going into the game, the stakes were high considering it would give Baylor basketball an unblemished non-conference record. It’d also give them a quality win against a Bulldogs team with a young Rodney Hood.

Baylor won the game 54 to 52 thanks to a go-ahead layin from Jackson – his only field goal of the second half. Hood couldn’t tie things up on the other end, improving Baylor to 13-0.

The Bears finished the season at 30-8, losing to Kentucky in the Elite Eight.

Another Kentucky game? Surprisingly the two programs have a lot of recent history, and the last two have gone in the direction of Baylor basketball.

Baylor came in unranked and at 4-2. They started the season in the top 20 of the AP Poll and the two losses came to Colorado and College of Charleston, albeit two teams who would each win 20 games that season.

But it was a big game for the Bears to live up to preseason expectations.

The Kentucky team led by Archie Goodwin, Nerlens Noel, and some other spectacular freshman put up just 55 points on the stifling Bears defense, who also held the Wildcats below 35 percent shooting for the game.

But for Baylor basketball, it was a crucial win that they got. Unfortunately, they couldn’t ride it to the NCAA Tournament, but it would’ve been a key step forward if they had won more games going forward.

2016-17 was a magical year for Baylor basketball. The Bears reached a high of number one in the AP Poll and won 27 games. One of the biggest games was against Xavier with both teams ranked in the top ten.

The Bears won the high-powered matchup by 15, holding J.P Macura to just seven points on 2-of-16 shooting from the field. Baylor got 41 out of Manu Lecomte and Jonathan Motley, who propelled them to the runaway victory.

Although the game wasn’t as close as most would have thought, it was more about the final outcome for Scott Drew’s team. Baylor took advantage of the hyped-up contest and won it easily, something that will always stick with the program.

Before the Xavier game, it was Louisville. While this one may not have been as hyped up going into it nationwide, it was perhaps more so for the Bears.

Baylor basketball came into the game at 20th in the country, with Louisville ranked at number 10, but it was more about what the game meant. The two teams were playing for the Battle 4 Atlantis title. For the Bears, it was about winning an early-season tournament against a legendary program.

The Cards got up big early, at one point leading 28 to 8.

And that’s where the magic started to happen.

Baylor’s defense started to kick in, going back and forth for the remainder of the first half, cutting the Louisville lead to 15. That defense picked up even more in the second half, and a few threes and transition buckets later and the Bears took a 57 to 56 lead.

They didn’t look back and a ferocious slam from Jonathan Motley gave the fans all they needed.

Donovan Mitchell turned it over with under a minute to go and Baylor was able to finish down the stretch for one of the biggest wins in program history.