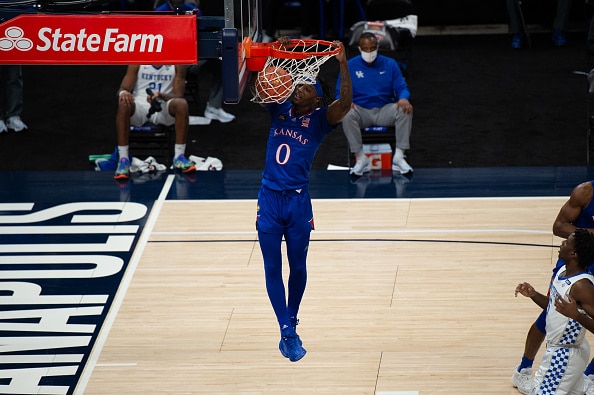 Jalen Wilson scored 21 of his 23 points in the second half to lead Kansas in a sloppy game against the Kentucky Wildcats by a score of 65-62. Wilson was the only Jayhawk to make a field goal in the second half until Ochai Agbaji knocked down a big three-pointer with 2:43 to go in the game. Between going to the line, knocking down two big threes, and grabbing rebound after rebound (10 to be exact), Wilson nearly singlehandedly won this game for the Jayhawks.

Both teams shot the ball extremely poorly, with Kansas shooting an astounding 29.9% from the field and 23.8% from three, and Kentucky not doing much better at 36.1% from the field and 14.3% from three. Kentucky is now 3-31 from three the last two games, which is obviously a big reason why they have dropped the last two games. If they can’t find their shot, they will have a lot of trouble with a tough non-conference schedule still remaining.

Kentucky actually looked like they were going to control the game in the first half, with incredible defense. Kentucky’s defense only allowed Kansas to score 5 points, all by Ochai Agbaji in the first ten minutes of the game and jumped out to a 17-5 lead. The lack of shooting didn’t allow them to pull away though, and Kansas was able to cut it down to 6 right before the half.

The last 30 seconds were a nail biter though. Up 3 with the ball, Ochai Agbaji was fouled with the chance to put the game away as the clock reached 26 seconds. He would go on to miss both free throws to keep it a 3 point game, but Christian Brown snuck in and grabbed an offensive rebound. Now, with his chance to put the game away, he only went one for two from the line and kept it a four-point game. Kentucky would then go down the floor and Davion Mintz hits a wild three-pointer to cut the lead to one. Ochai Agbaji would make his two free throws to push the lead up to three and Mintz would go on to miss the tying three to end a game that both teams will probably not want to think about the rest of the season.

Jalen Wilson as mentioned was the star for Kansas, finishing with 23 points and 10 rebounds. Agbaji added 17 points and Christian Braun had a great rebounding game with 13 boards to go along with 8 points, 2 steals and 2 blocks. Marcus Garrett, who originally wasn’t supposed to play because of an illness was clearly out of it and didn’t look like himself all game. Hopefully, this is a short term issue and the pre-season All-American can come back to full health for their next game. David Mccormack continued to struggle with a 1-9 performance from the field and looked out of place when he was on the court.

Isaiah Jackson was the lone star for Kentucky, with 7 points, 12 rebounds, and an outstanding 8 blocks. Mintz and Brandon Boston were the teams leading scorers with 12 points, and Olivier Sarr added 8 points and 6 rebounds but was stuck in foul trouble for a good majority of the game.

Kansas (2-1) has a bye game against Washburn on Thursday, while Kentucky (1-2) should have an easy matchup against Georgia Tech who are 0-2 with losses to Georgia State and Mercer.