A New Look for the American: Tulsa basketball 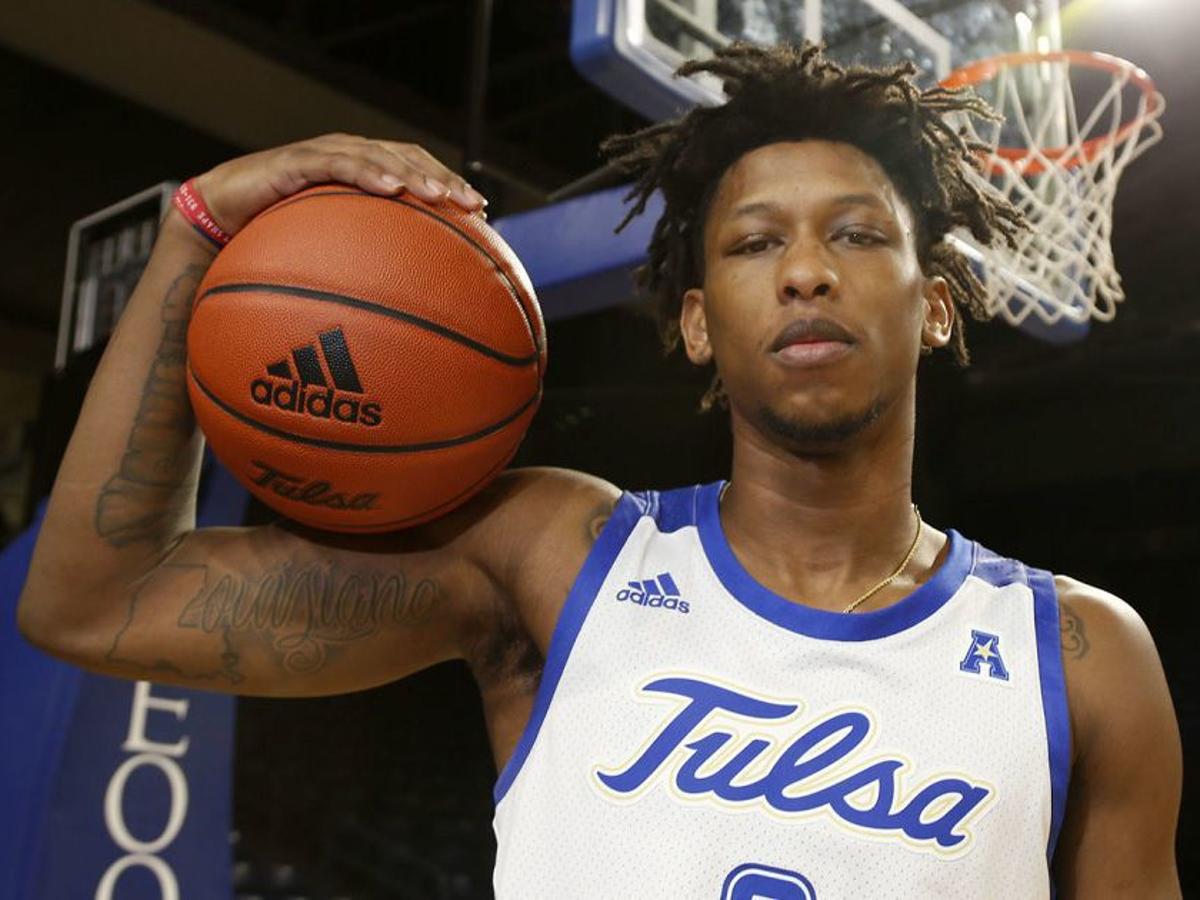 In the final game of the season, a loss to Wichita State at Charles Koch Arena, Tulsa basketball ended up in a 3-way tie for first.

The team that was picked to finish 10th in the preseason projection seemingly had a chip on their shoulder. Under coach Frank Haith, Tulsa basketball finished 13-5 in conference and 21-10 on the season. This team returned a majority of its players and two of its top 3 scorers in Jeriah Horne and Martins Igbanu but remained overlooked by analysts. This could happen again, as the Golden Hurricane lose a handful of players, but bring back 3 players that saw vital minutes and have tremendous talent from last year. These three players include Elijah Joiner and Darien Jackson both senior point guards standing 6-foot-3. Jackson averaged 26.1 minutes, 7.9 points, 3.4 rebounds and 2.2 assists per game. Joiner averaged 26.4 minutes, 7.3 points, 3.8 rebounds and 2.9 assists per game. The last big contributor for the team is Brandon Rachal a 6-foot-6 senior averaged 29.1 minutes, 12.1 points, 5.8 rebounds, and 1.4 assists per game. There are a few other changes to the team, but definitely feel that Tulsa men’s basketball will be happy to have these 3 players back.

The leading big man for the Golden Hurricane, Martins Igbanu, has graduated. He is a 6-foot-8 center that averaged 26.6 minutes, 13.6 points, 5.0 rebounds, and 0.8 assists per game. While he was the leading scorer, Coach Haith was really looking ahead and was able to secure a player. He grabbed Emmanuel Ugboh, a 7-foot-0 from Iowa Western Community College, was able to learn under Igbanu and get some playing time. Ugboh’s best game in division 1 came early in the season against Vanderbilt were he went 4 for 4 and scored 8 points. His weakness was getting into foul trouble and seemed turnover prone. These are items that can be worked on, it would also be nice to see him expand his game to include mid-range shots or three-pointers. The other graduating senior is Lawson Korita, the 6-foot-5 guard who played 25.5 minutes, 7.0 points, 2.7 rebounds and 1.0 assists per game.

Sticking with guards, Isaiah Hill is a 6-foot-0 point guard that transferred close to home in Fresno State. He will likely be a starter at Fresno and will probably receive a waiver since he is moving close to home. Hill averaged 20.5 minutes, 4.2 points, 1.7 rebounds, and 2.2 assists per game. This is a great move for him with some visibility against good teams in San Diego State, Utah State, Nevada, and UNLV. The next player is Reggie Jones, a 6-foot-7 senior shooting guard, who will also likely get a waiver as he again is moving close to home to attend Ball State. While Jones was useful, he averaged 13.1 minutes, 3.8 points, 1.9 rebounds, and 0.8 assists. He will likely be a starter for Ball State as Kyle Mallers and Tahjai Teague, the starting big men, have both graduated. The biggest transfer is actually Jeriah Horne. The 6-foot-7 senior is transferring to Colorado. He has received a waiver and is eligible to play immediately. Horne was a solid player that averaged 29 minutes, 11.1 points, 5.2 rebounds and 1.4 assists per game.

Coach Haith was able to recruit a couple of guards that redshirted last year in Keyshawn Embery-Simpson and Curtis Haywood. Embery-Simpson is a sophomore transfer from Arkansas. He is a 6-foot-3 sophomore point guard. At Arkansas, Embery-Simpson averaged 14.6 minutes, 4.1 points, 1.2 rebounds and 0.6 assists per game. Watching his tape, there are sparks of solid play, but really hope that the redshirt year under Haith will allow him to develop and become even better. He looks for open players to guard and isn’t a great 3 point shooter, but has a solid mid-range game. Looking further back at Embery-Simpson’s high school highlights, he has great floor vision and could be a huge asset for the Tulsa men’s basketball team.

The other player is Curtis Haywood II transferred in last year from Georgia Tech, so Tulsa basketball will get their first real look at him this year. Haywood is a 6-foot-5 junior shooting guard that had some good minutes. There were flashes, but again I think he needs better floor placement and vision. When Haywood is surrounded, he should be able to find the open man. In his highlights, he disrupts passes and has such a pure 3 point shot. I am hoping there is also more of mid-range game and that his defense is there.

The first is a player that is immediately eligible as a Junior College transfer. Austin Richie is coming from Triton Community College where he averaged 16.4 points, 4.5 rebounds, and 1.8 assists per game. He is a 6-foot-6 junior forward and after looking at his tape, he seems to be a shoot-first player. He will make room and has the size and ability to take it to the rim. Without more tape, I couldn’t tell how he played defense or if he had the court vision.

The only other incoming transfer is likely ineligible, this upcoming season is Rey Idowu. Idowu is a transfer from Illinois State and a player that coaches love. He is 6-foot-9 and while at ISU, he averaged 15.7 minutes, 4.4 points, 3.2 rebounds, and 0.7 assists. Idowu is an offensive machine, he won’t call for the ball but will be the player that goes up and gets the put-back. He is always looking for the ball and has great court awareness with a solid mid-range shot. Again, I would like to see more defense, but that will always be my gripe as that is what causes the most issues for teams.

As usual, all incoming freshmen will need to put on some muscle and add weight to really excel in the college. Keshawn Williams is a 6-foot-2 point guard. He is a 3-star recruit on rivals and shows a lot of potential. Williams has good court vision and body control. I liked his ability to change tempo and read the court. Williams likes to drive it in but is able to make the 3 or pass it out for a better shot. He had a few highlights that include disrupting passing lanes, picking off passes, and even a block. There are a lot of positives here but hope that transitions well from Bloom Township to college basketball.

Also from Bloom Township, Christian Shumate is a 6-foot-6 3 star forward on rivals. He is another solid player. Shumate finds the ball and positions himself well for offensive rebounds and easy put backs. Looking at tape, I did not see a lot of mid-range, but he can shoot the 3 and has length. Shumate is athletic, has good rim presence, but does bite on double teams. He occasionally lost his man, but again is something that he can learn and I will be curious to see how he ends up doing in college.

The last is listed as a 6-foot-6 shooting guard, Peyton Urbancic. He is an unranked recruit but is definitely a shoot-first player. He has a great ability to score from anywhere on the floor. Urbancic has a great touch and liquid shot that looks so easy from 3. As usual, I will be curious to see if he can play defense and how his feet look. His length definitely helps his skill set and who he guards but would like to see if he gets blocks, keep people in front of him, etc. Haith has another good team that should not be slept on.

The final addition to the 2020-2021 Tulsa basketball team is Bradley Alcime. He is a 6-foot-8 forward that has a lot of potential. Looking at his tape, he is a good distributor and almost guard like at times. Alcime also has solid rim protecting ability as he gets up easily. My worry here is that he often brings his arms down and this could cause issues as he goes to college. In this same area, he just needs a little better body control and positioning. All the tape I could watch also did not show any real mid range shots, this could be a huge benefit with his size as he has decent ball handling skills. The biggest thing is that he isn’t afraid to shoot the three. He seems to be a solid three point shooter and his shot is very quick. Alcime has an issue with going and getting passes. This is minimal, but he needs to be a little more aggressive at going and getting them. Alcime is very talented player that with Haith, could do a lot of great things.

This Frank Haith team is going to be and talented. With all of the additions, this team is very deep and has a lot of potential. After finishing tied for first last year, the team again has the ability to be a contender and in the top half of the conference.