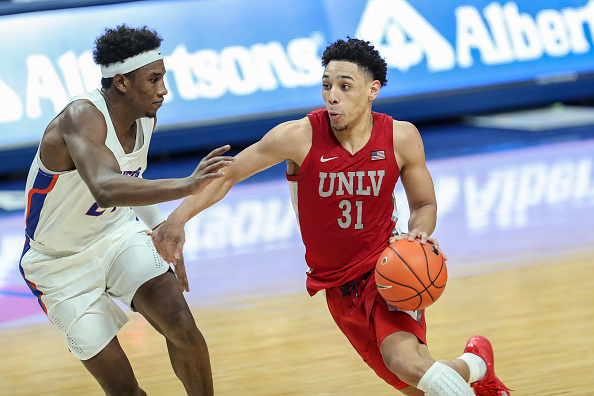 Dayton and San Diego State seemingly came out of nowhere last season. However, they were both top ten teams by the end of the season. College basketball’s unpredictability is what fans love the most about the game. This is especially true when crowds get behind a mid-major Cinderella in the Big Dance. Here are five mid-major teams that could surprise people next season.

Massachusetts is not ready to get back to its Final Four glory of the mid-90s. However, Matt McCall has a mid-major team that should compete at a higher level in the Atlantic 10 next year. For starters, reigning conference rookie of the year Tre Mitchell is back. He led the team with 17.2 points per game last season, good enough to also earn him a place on the A10’s second-team. Carl Pierre and TJ Weeks are also back, meaning that UMass’ top three scorers are returning. The program is also hoping Wichita State transfer Noah Fernandes can get a waiver to play immediately.

The Minutemen finished eighth last season in the league, though they won four of their last six games. That included victories against VCU and Saint Louis. They also pushed Dayton to the edge in one of those losses. Saint Louis and Richmond are the presumed favorites for the A10 title entering the season. However, Massachusetts will have something to say about that.

Charlotte shocked a lot of folks in the Conference USA basketball world with their fourth-place finish last season. After all, the 49ers were picked 12th in the preseason poll. The success of the program is in large part thanks to reigning freshman of the year Jahmir Young. Young averaged 12.5 points and 5.2 rebounds per game, good enough for a third-team nod as well. Jordan Shepherd is also returning after averaging 14 points and 4.1 assists per game and earning his own spot on the third-team. Incoming three-star power forward Jared Garcia should also provide a boost.

Charlotte’s experience playing in the conference’s top level of bonus play last season should help them. They went just 2-2 during that stretch, but it showed them what they need to do to take the next step in competing for a conference title. That should give the 49ers and their fans all the confidence in the world heading into 2020-21.

UNLV is another team on this list looking to return to its mid-major glory days. While a national title may be a lofty goal right now, winning the Mountain West is not. It starts with Bryce Hamilton, who was selected as a first-team member of the Mountain West’s all-conference teams. He earned that accolade by averaging 16 points and 5.5 rebounds per game a season ago. Marvin Coleman and Cheikh Mbacke Diong return to support Hamilton. On top of that, TJ Otzelberger has added South Dakota State standout David Jenkins Jr. as well.

Given all of the coverage that San Diego State and Utah State received last year, you may be surprised to learn that UNLV actually finished second in the league last year. Of course, UNLV received most of their attention from being the first team to beat the Aztecs last year. That win came in a stretch of five straight to close the season before the conference tournament. The future is bright in Las Vegas.

The Ohio Valley Conference has been dominated by mid-major stalwarts Belmont and Murray State over the past decade. However, Austin Peay was right there with those programs last season and may be set to overtake them this upcoming year. The Governors had one of the best duos in the country last year in Terry Taylor and Jordyn Adams last season. Taylor averaged 21.8 points and 11 rebounds per game on the way to being named OVC player of the year. His withdrawal from the NBA Draft was huge news for the Governors. Adams averaged 17.4 points and 3.2 rebounds per game, good enough to be named the league’s freshman of the year.

The dangerous part about this team is that they are young. Freshmen Carlos Paez and Alec Woodard both played valuable minutes last season that should help them increase their contributions this season. Austin Peay started conference play 10-0, including a victory over Belmont. Taylor and Adams alone can carry this team far. Do not be surprised if you see the Governors making some noise next season.

Outside of Andrew Kostecka, Loyola got a lot of its production from freshmen. The Greyhounds had three players make the Patriot League’s all-rookie team. Santi Aldama missed most of the season with an injury, but returned for ten games, averaging 15.2 points and 7.6 rebounds. Cam Spencer averaged 10 points, 3.4 rebounds, and 3.1 assists per game while playing an average of 28 minutes. Golden Dike contributed seven points and 5.2 rebounds per game off the bench. Those three will return along with starters Isaiah Hart and Jaylin Andrews to form a formidable lineup.

That group will need to figure out who the go-to scorer will be with Kostecka graduating (19.9 points per game). Still, Loyola managed to go 6-3 in February, including a win over regular-season champion Colgate. The Greyhounds should feel good about themselves heading into the upcoming season and have a chance to compete for a league title.