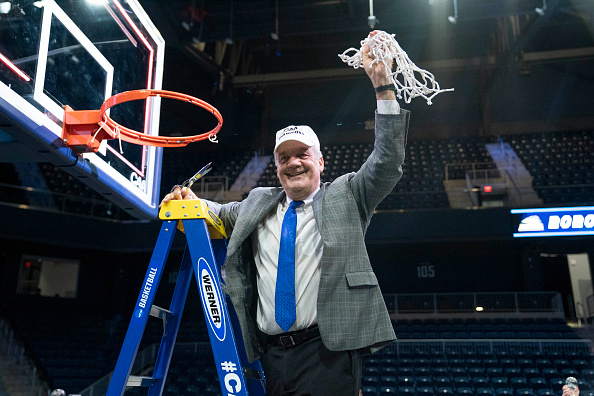 When Joe Mihalich was introduced as the new head coach for Hofstra basketball in 2013, the program was coming off a seven-win season.

It was the first time Hofstra basketball had won single-digit games in ten years. Furthermore, the gap between the Pride’s last NCAA Tournament appearance was growing. Mihalich came from Niagara, where he guided the Purple Eagles to five national postseason appearances, including two NCAA Tournaments.

In his seven seasons at the helm in Hempstead, NY, Mihalich has carried that success with him. He has guided Hofstra to three regular-season CAA titles and earned the school’s first NCAA berth in 19 years by capturing the conference tournament championship this past March. Over the past five seasons, the program has averaged 22 wins and has consistently set the bar that the rest of the CAA is trying to reach. I had the chance to talk with Coach Mihalich and ask him some questions about this past season’s championship run as well as how he is preparing for Hofstra to defend its title.

1) What kind of motivation did your team have coming into this past season with getting so close to the NCAA Tournament the year before?

Coach Mihalich: We had that constant battle cry that we came up one game short. We set a school record two years ago with 27 wins, but we weren’t happy because we didn’t win that one game. It was our battle cry all year long that we know how to get there, we’ve been there, and let’s try to get back and win it this year. Thank goodness we did.

2) Can you describe how meaningful it was for Hofstra basketball to win at UCLA this past season?

Coach Mihalich: That was a win for the ages. An epic win. You hate to personalize things, but on a personal note, it was surreal. You couldn’t believe that you were in Pauley Pavilion, one of the most famous basketball arenas in the world, and we were able to beat UCLA. It was great for the whole university as well as for anyone who has ever worn the uniform, supported the program, bought a ticket, gone to a game, donated money, and who has taught or worked at the school. It was a wonderful thing.

3) How do non-conference games against power conference teams like UCLA prepare your team for conference play?

Coach Mihalich: Whenever I talk about non-conference scheduling, I mention that everything you do points towards getting your team ready for non-conference play. It doesn’t matter whether it’s at UCLA or at Bucknell, Stony Brook, Princeton, or any of the other good teams we played. Every game you play is sharpening your team for league play. The game against UCLA proved that we could win on the road and proved that we could beat a team that is bigger, stronger, faster, and more athletic than us. It showed we could beat anybody. The win gave us all the confidence we needed to springboard into conference play.

4) What kind of comfort did it give you as a coach to have veteran leaders like Desure Buie and Eli Pemberton in the backcourt for Hofstra basketball this past season?

Coach Mihalich: That’s how you win, with good players, and especially with good guards. You win with senior guards. Desure Buie and Elijah Pemberton checked every box.

5) What did the week look like and what was the range of emotions that you and your team felt when the NCAA Tournament was canceled a few days after winning the CAA Championship?

Coach Mihalich: You go from your highest high to your lowest low. From the happiest you have ever been in your life to being gutted. But, that’s life, and that’s a life lesson that we all had to learn. Going to the NCAA Tournament hadn’t been done at Hofstra in 19 years, and for myself in about 13 years. It’s hard to do that. We did it, and 43 hours later they canceled the tournament. You are cutting down nets one night only to have to choke back tears days later as you inform the team the season is over.

6) Did you get a chance to collect your thoughts before addressing your team about the tournament’s cancellation?

Coach Mihalich: It ended up becoming an awkward situation. As soon as we arrived back to campus from the CAA Tournament in Washington D.C., Hofstra, like so many other schools, had canceled in-person classes and sent students home. The following week was spring break. We have five guys who live really close to school and ended up going home when we returned to campus. We did not get a chance to have the whole team together.

Communication ended up being choppy. We did bring the guys together and have a conversation about how life isn’t fair, but we also reflected on all the good things we accomplished. How we ended the season with a win and cut down the nets. How we reached the NCAA Tournament and won the championship for the first time in 19 years. We talked about all of that as much as we discussed that we weren’t going to get the chance to be the Cinderella team this season and to do something special. But, as I’ve said already, nobody ever said life was fair. It’s about how you deal with those setbacks.

7) How has the COVID-19 pandemic affected the way you and your staff have started to prepare Hofstra basketball for the 2020-21 season?

Coach Mihalich: It has definitely been weird. We were, fortunately, able to sign a few kids in the spring because we had done a good job recruiting them throughout the year. Luckily, we did get the chance to finish our season. Some sports, especially the spring sports, played just a few games and then that was it. We had a complete season even if we didn’t get to play in the NCAA Tournament as we had earned. Our guys were due for a break, so we were able to give them that. It’s just now starting to get weirder and weirder. We had a Zoom call today and it felt weird because we haven’t seen our guys since the middle of March. I miss them and I love them, and I miss getting to spend time with them.

8) With the NCAA approving the resumption of voluntary workouts, has the school discussed a plan for athletes to return to campus?

Coach Mihalich: As we speak, the Governor of New York and the President of Hofstra University have still not cleared people to be on campus. The state is still in phase one of the four-phase process of reopening. We can plan, but no one will be allowed back on campus until New York reaches phase four.

9) What kind of added pressure is there coming into the 2020-21 season as the defending regular-season and conference tournament champions?

Coach Mihalich: Like a lot of other people who have had success, no one puts more pressure on us than ourselves. We don’t feel the pressure from other people. We have our own standards, goals, and ways of looking at things. If people want to pick us first or second, that’s a compliment, but it doesn’t mean a lot. We always say you have to either prove them right or prove them wrong. If you’re picked high, you have to prove them right. In the last couple of years, we’ve been picked first and we’ve finished first, so we’re proud of that.