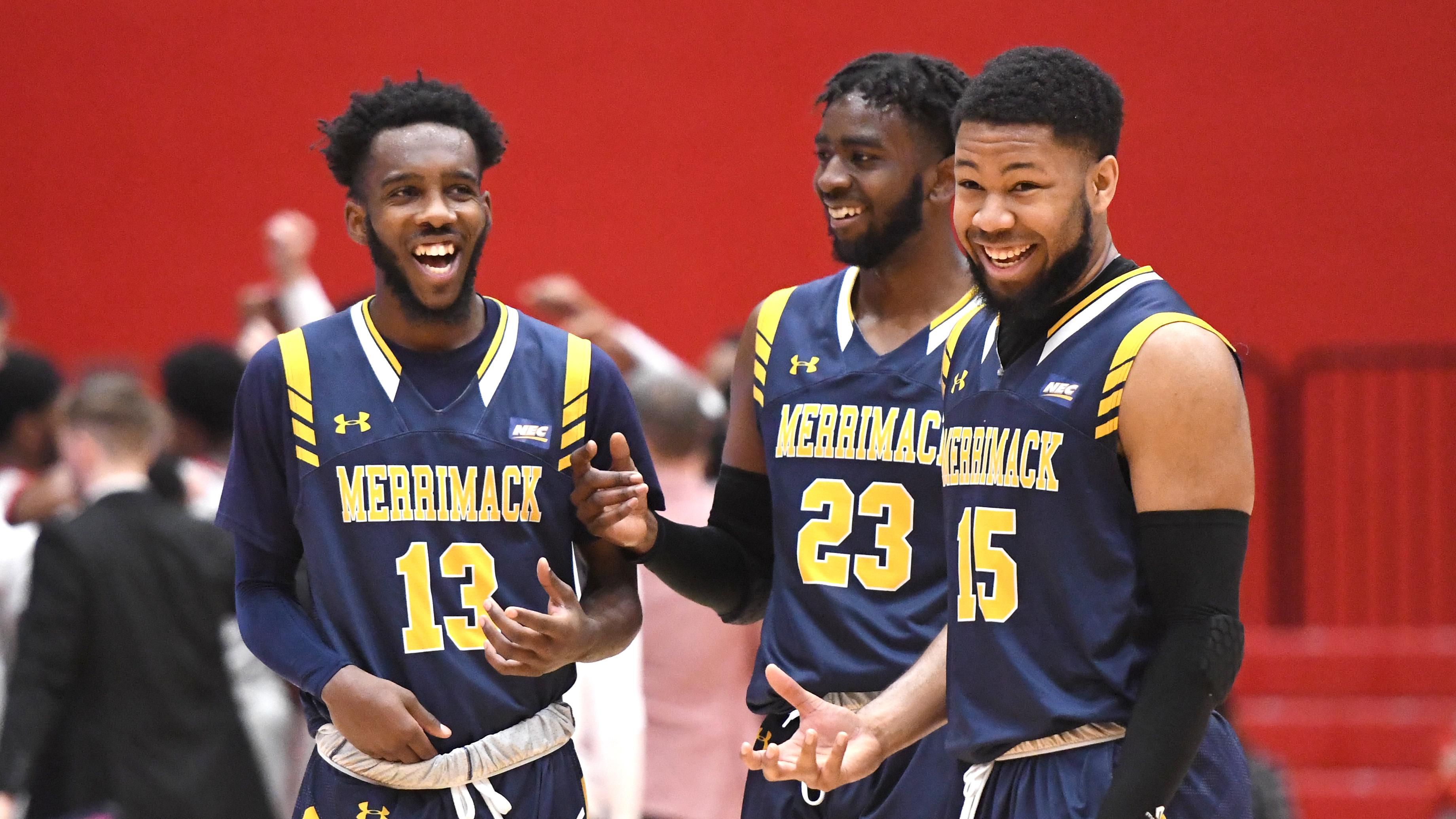 One year at the Division One level and Merrimack basketball is already making noise. Head coach Joe Gallo filled us in on the transition to the highest level.

If you’ve never heard of Merrimack basketball, you might want to bring up Google and do some research. In their first ever season in Division One college basketball, the Warriors were as competitive as any mid-major school out there, making us wonder what other hidden gems are still one level below.

With season one in the books, I spoke with Merrimack Head Coach Joe Gallo, who told me he’d grade this past year as an A or an A+ overall. And no, Coach Gallo isn’t like one of those professors who gives ten extra bonus points due to Covid-19. That was a rightly given top-notch grade for a program that seems to be moving in that direction at a fairly consistent pace.

Those goals and then some were actually always in sight for Coach Gallo and his Warriors. Gallo said, “We had the regular season championship in sight… we had the most wins ever by a first year transition program. Our seniors had the all-time winningest class in school history. Even without the NCAA Tournament, we found plenty of things to play for,” Gallo continued, “We had a bunch of competitive guys who showed up every day and really wanted to beat who’s next.”

And boy did they complete those goals and shock the college basketball world as well. After opening the season with a blowout loss to Maine, the Warriors rallied to win at Northwestern – yes, Big Ten Northwestern – by ten points. That win brewed confidence, as they would go on to win two of their next three games.

At this early point in the season, Gallo new they had something special, saying “After that weekend, as a staff, we felt that if we followed our formula and get these guys better as the year went on, we’d have a really good shot to win some games.”

It didn’t come without some bumps in the road, however. They soon lost by nearly 40 to a heavily favored Providence Friars team, followed up by five of their next nine, for an iffy 7-8 (1-1 NEC) record.

But then a light clicked. Merrimack basketball went on a tear, rattling off nine straight wins, and 11 of 12, to boast an impressive 18-9 (13-2) record.

While some could argue that they played with a certain kind of chip on the shoulder, let’s not act like this team didn’t have a dream makeup for a coach. Their top three scorers were all seniors – North Jersey kids at that – which seemingly brought some type of cohesion, or at least a backbone to rely on for the whole team.

But where Juvaris Hayes brought a fair share of just about everything, averaging 10.7 points per game, 6.4 assists, 4.7 rebounds, and an incredible 3.9 steals, the rest of the team wasn’t too far off in the scoring department. “Some of the 2-guard stuff we run is equal opportunity with everybody touching the ball,” said Gallo, “Our roster, one through nine or ten, outside of Juvaris who was unique in his own way, there really wasn’t a whole lot of separation.”

To Gallo’s point, at 10.7 ppg, Hayes was second on the team in scoring, with Jaleel Lord taking the cake in that department, just above him at 10.8 ppg. However, the balance continued way down the roster, with six other guys all contributing 4 points or more on a daily basis.

Merrimack used this unique offensive balance to wear down its opponents, finishing the season at 20-11 (14-4), completing their goal of an NEC regular season championship.

Does the road stop there? Not at all.

Coach Gallo told me he’s got plans in place (albeit not over Zoom meetings – he’s not a big fan of those) to make Merrimack basketball an NEC contender year in and year out:

“For us right now, the goal is always going to be NEC regular season champs.  That’s something we’ll talk about on September 6th, and we probably won’t ever bring it up again until it becomes more of a reality later on in the year.  We lost the three seniors, but each year brings a completely new team, because guys grow into bigger roles and you add a couple pieces, so we’re right back to the drawing board.  Whenever our first day is this year we’re just going to build them up from the start.”

In other words, Merrimack basketball isn’t going anywhere. That Northwestern win? Consider that a preview for what’s to come. The NEC regular season title? He wants that to be a goal every year, saying “We’d like to establish ourselves as one of the premiere programs of the NEC, and when we are finally eligible to play in the NCAA Tournament, we want to be there ready to go.”

In other words, this isn’t a program just happy to be here. They want to stay here and continue to make some noise.

The Golden State Warriors took the NBA by storm, winning three titles from 2015 to 2018.

Now, it’s a different Warriors team ready to shine in their own league.