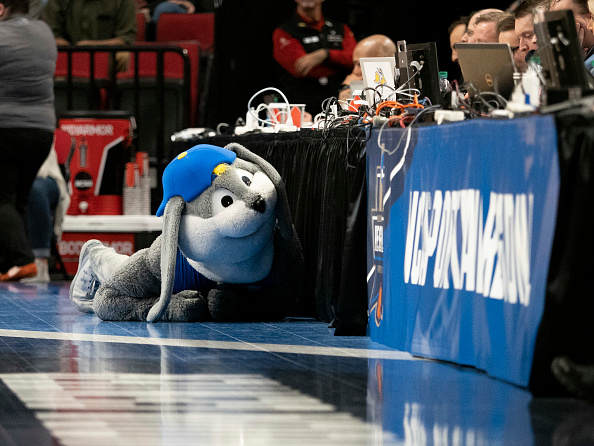 Wildcats. Bulldogs. Eagles. Camels? With 353 programs at the Division I level (and four more joining for the upcoming season), there are all kinds of nicknames out there. There are some that are overused while others are about as random as they get. A mid-major mascot can get as strange as they come. Here are some of the most unique mid-major mascots cheering on their teams.

Pepperdine has had various versions of Willie roaming the sidelines since 1952. He disappeared in 1996 in favor of “King Neptune,” though he did not last long, going away in 2003. The Waves went without a mascot for three years before bringing Willie back in 2006. The version pictured looks like he is ready to hang ten, though a newer version has since been introduced that would be ready to jump into the starting five with full Pepperdine basketball attire. He has seen the Waves participate in ten NCAA Tournaments.

There are a few overlapping stories that credit the Penguin becoming Youngstown State’s mascot. Essentially, in the early 1930s, the basketball team had a cold ride to a game in West Virginia, and, upon arrival, the players were flapping around the court trying to warm up before tipoff. This led the opposing team’s coach to say they looked like penguins. Pete the Penguin was a real animal until 1978, when his fuzzy counterpart was born. He was introduced to Penny in 1985, with a formal wedding in November of 1986. The happy couple renewed their vows in 2018, though they are still waiting to see the men’s team play in the NCAA Tournament.

Drexel has carried the Dragons moniker since 1928. The nickname was changed from “Engineers,” as the engineering students no longer wished to be recognized as such. Mario the Magnificent was named after Mario V. Mascioli, an alumnus who did not miss a basketball game for 20 years. Mario has taken many forms, including paper mache, over his 90+ years of existence. He has lots of fun messing with his University of Delaware rivals and has seen the Dragons make four NCAA appearances, though the school is in a 24-year drought.

Grand Canyon has only been at the Division I level for seven years but has a unique mid-major mascot. The Antelope was chosen in a schoolwide vote in 1949 with students wanting to choose something that represented the region. The first furry mascot to roam the sidelines came in 1981, with the name Thunder being chosen in 2008. Thunder is a fan favorite and routinely gets introduced as the best mascot in America. He loves to perform trampoline dunks and hopes the Lopes will hop into their first NCAA Tournament in the near future.

You may not think a rabbit is menacing, but the school in Brookings, South Dakota does. The Jackrabbits nickname is believed to have originated from a description of the football team in the early 1900s. The yearbook staff ran with it, and an official jackrabbit logo was adopted in the 1940s. Jack was aptly named in 2010 by a vote. He is well-recognized by his backward hat and large, floppy ears. Jack has seen his beloved school play in five NCAA Tournaments and had the pleasure of seeing Nate Wolters and Mike Daum come through the program in the past decade.

The Summit League gets a second mid-major mascot on the list courtesy of Purdue Fort Wayne. A mastodon is an ancient elephant that roamed the Great Lakes region about 10,000 years ago. In 1968, a skeleton was found on campus, coinciding with the school looking to pick a mascot. Thus, Mastodons was chosen, both due to the fossil and because the students wanted to be different from other state schools. Don has huge tusks and a muscular frame that would give Big Al at Alabama a run for his money.

How do you choose a mascot when your nickname is a shortened version of the word zipper? With a kangaroo of course! However, the Australian animal was not chosen until 1953, getting selected by a student council advisor and winning approval because of its uniqueness. Zippy first appeared in 1965 and is believed to be one of eight female mascots in American college athletics. She is one of the better-known mascots out there and has won numerous accolades. Zippy has seen Akron play in four NCAA Tournaments.

The origin of the Camel identification is still largely unknown. However, one story states that founder Dr. James Campbell misheard a conversation in which he thought someone told him “you’re a camel, get a hump on you.” It was officially adopted in the 1930s. Gaylord loves riding around campus on his tricycle, greeting students and visitors alike. He has a huge hump that sticks through his basketball jersey, making it easy for him to back anyone down in the paint. Gaylord has seen Campbell make one NCAA appearance.

Did you ever think a school could pick a nickname based on a comic strip? Well, that is exactly what UC Irvine did in 1965, choosing Anteaters based on the character in the comic B.C. His signature chant was ZOT!, which is still the main cheer on campus today. Peter has an “ANT-ourage” at basketball games and has even appeared on the Conan O’Brien Show. He is a huge symbol for the school, and, at 6’9″, would be a force in the paint. Peter has had a front-row seat for two NCAA Tournaments, including last season’s first-round upset of Kansas State.

How does a big, red blob, appropriately named Big Red, take the mid-major mascot top spot? For starters, Big Red may be the most-recognizable mid-major mascot out there. He was created in 1979 when the university was looking for a mascot that was not an animal and did not resemble the hillbilly stereotype. Big Red debuted during the 1979-80 basketball season and has achieved celebrity status ever since. He has made numerous television appearances, including in a SportsCenter commercial. The red blob of a mascot has belly shaken and slid on the sidelines of 14 NCAA Tournaments.