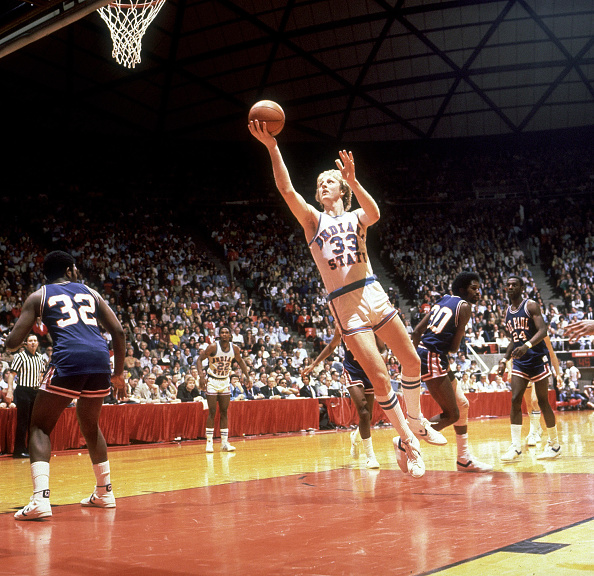 The game of college basketball has evolved over the years. Programs rise and fall with the times, except for the blue bloods who always seem to be competitive every year. However, some of the best players in the history of the game played on teams that did not compete in power conferences. Let’s dive into the ten greatest mid-major basketball players of all time.

Oscar Robertson is considered by many to be the greatest college basketball player of all time. He only played three seasons for Cincinnati, who was a member of the Missouri Valley Conference at the time, as NCAA rules did not permit freshmen to play at the varsity level at the time. Robertson won the national player of the year in each of his three seasons while also being a consensus first-team All-American in each year. He averaged 33.8 points per game for his career, the third-most in NCAA history.

Robertson scored 2,973 points in three seasons, the second-most points ever in a three year span behind Pete Maravich. He was so influential that the United States Basketball Writer’s Association named their annual player of the year award after him. He was the top pick in the 1960 NBA Draft to the Cincinnati Royals and resides in both the Basketball and College Basketball Hall of Fame.

Calvin Murphy played for Niagara when the Purple Eagles were still a Division I independent. He rocked mid-major basketball, making the All-American team unanimously three times, twice on the first-team. Murphy singlehandedly filled up Niagara’s gym, especially after his legend grew when he averaged 48 points per game on the JV squad as a freshman.

He led the team in scoring in 71 of his 77 career games and made headlines when he dropped 68 points on Syracuse in 1968. For his career, Murphy averaged 33.1 points per game. That includes averaging 38.2 points per game as a senior in 1969-70 while leading the Purple Eagles to their first-ever NCAA Tournament appearance.

Larry Bird was must-see during his time at Indiana State. He elevated the Sycamore program to heights it had never been to before. Bird was a two-time consensus first-team All-American in his three seasons. His fantastic senior year saw him take home the Naismith, Wooden, and AP player of the year honors for the 1978-79 season.

Bird left Indiana State as the program’s career and single-season leader in scoring, rebounding, and steals. He averaged 30.3 points and 13.3 rebounds per game for his career. Bird’s senior season ended in the highly-anticipated NCAA title game between his Sycamores and Magic Johnson’s Michigan State Spartans. Indiana State may have lost, but they are still the only program to make it to the NCAA Championship Game in their first tournament appearance, largely thanks to Bird.

Bill Bradley was a three-time member of the All-American team, twice as a consensus first-teamer. He brought home the AP’s Player of the Year award as a senior in 1964-65. Bradley was especially lethal when playing in NCAA Tournament games. He averaged 33.7 points per game in tournament matchups, the second-most in NCAA history.

For his career, he averaged 30.2 points and 12.1 rebounds per game. Bradley took Princeton to its only Final Four berth in 1965. His 58 points against Wichita State in the 1965 consolation game remains the most in Final Four history. That performance helped him take home the tournament’s most outstanding player award.

Bill Russell is another mid-major basketball player that gets thrown into the discussion for the greatest of all time. He literally made the NCAA rewrite the rulebook, forcing the addition of a basket interference rule as well as widening the lane. Russell’s only scholarship offer came from San Francisco, and he certainly made every other program pay for that mistake. He ended up being a consensus first-team All-American twice during his three-year career.

Russell averaged 20.7 points and 20.3 rebounds per game during his career. He helped the Dons win back-to-back NCAA Championships in 1955 and 1956. That dominance included a 60-game win streak, anchored by Russell’s dominance in the paint. He went on to an even better NBA career with the Boston Celtics, considered by some to be the best to ever play at the professional level.

Butch Lee played for Marquette when they were still a mid-major basketball program. He was a two-time consensus All-American, including the first-team in 1978. Lee capped off a great senior season by taking home the Naismith Award and the AP Player of the Year honor. He remains Marquette’s second all-time leading scorer.

Lee averaged 15.1 points, 3.3 rebounds, and 3.3 assists per game for his career. He helped the Golden Eagles (then Warriors) capture the 1977 NCAA title. That includes taking home the tournament’s most outstanding player award. Lee went on to be the tenth pick of the 1978 NBA Draft by the Atlanta Hawks.

Ed Ratleff was a two-time consensus first-team All-American during his junior and senior seasons, the only first-teamer in program history. He left as the school’s leader in scoring, rebounding, and assists. Ratleff led the 49ers to three NCAA appearances, including two Elite Eights.

He averaged 21.4 points and 8.4 rebounds per game for his career. Ratleff shined in the NCAA Tournament, making the all-region team twice as well. He went on to play six seasons in the NBA as well as being a member of the 1972 Olympic team.

Larry Johnson transferred to the Rebels from the JUCO ranks and never looked back. In two seasons at UNLV, Johnson made the All-American team as a first-teamer both times. As a senior, he won the Naismith and Wooden awards in 1991. He was a key piece of the 1990 National Championship team.

Johnson averaged 21.6 points and 11.2 rebounds per game in two seasons in Las Vegas. He almost got UNLV to capture back-to-back titles in 1991, winning all 35 of their games before falling to Duke in the championship game. Johnson is the first player in program history to be named to the college basketball hall of fame, and he was the first overall pick in the 1991 NBA Draft.

Tom Gola was a three-time consensus first-team All-American while playing for the Explorers. He earned the nickname “Mr. All-Around” for his ability to play every position on the court. Gola was the first player in NCAA history to be a four-time All-American. He was also the first player to accumulate at least 2,000 career points and rebounds.

Gola averaged 20.9 points and 18.7 rebounds per game for his career. He finished his career as the NCAA’s career rebounding king. Gola helped La Salle win the 1954 National Title, taking home the most outstanding player award. He later went on to coach at the school and has the arena named after him.

David Robinson is the greatest service academy player of all time. He hit a growth spurt while in school, shooting him up to be a seven-footer. Robinson was a two-time consensus All-American, including a first-teamer in 1987. He also took home the Naismith, Wooden, and AP Player of the Year honor for the 1986-87 season.

Robinson took Navy to the Elite Eight in 1986, still the furthest the program has ever gone. He averaged 21 points, 10.3 rebounds, and 4.1 blocks per game during his career. Robinson was the first overall pick in the 1987 NBA Draft but fulfilled two years of naval service before beginning his professional career. He is also the first male basketball player to play in three Olympics.