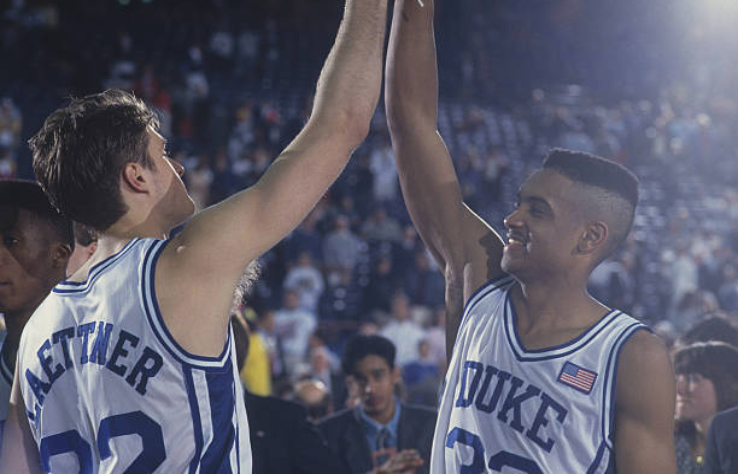 The Blue Devils have had a handful of stars play for them in Cameron Indoor Stadium.

Duke Basketball is based on guards that can run the floor, good shooters, and big men down low that can body others in the paint. With that in mind, I wanted to make sure I could have shooters outside, a body down low that is practically unstoppable on the boards and a guard who has incredible court vision and the ability to get to the basket quick.

If I had to construct an All-Time Starting Five, this is how it would look.

In just 11 games at Duke, Kyrie Irving made a name for himself. Averaging 17.5 points per game on 53% shooting along with 4 assists per game, Irving was always a problem on the court. His handles and ability to shoot propelled him to be the No. 1 overall pick in the 2011 NBA Draft and has continued to grow as a player with his mischievous handles jaw-dropping drives to the hoop.

JJ Redick may be one of the deadliest shooters in college basketball history. He is third for the most three-pointers in NCAAM history, second in most points in ACC history and fourth in career free-throw percentage. He stayed at Duke for all four years prior to going to the NBA. Each year he improved, and during his senior year, he shot 47% from the field and averaged 27 points per contest. He also won the 2005-06 AP Player of the Year. Easily the best shooter Duke Basketball has ever seen.

Grant Hill is one of the all-time greats in Duke basketball history. He helped Coach K and the Blue Devils win the National Championship in 1991 and 1992. He won the 1994 ACC Player of The Year and was a three-time All-American in his time at Duke. A 6’8″ forward who had the handles of a guard, Hill was an all-around player and a scary sight on the court.

One of the scariest athletes the college basketball world has ever seen, Zion Williamson was a tank. Zion played in 33 games in his only season at Duke averaging 22.6 points, 9 rebounds, 2 steals, and 2 blocks per game. His athleticism and mesmerizing dunks gave Duke talent that no one has seen before.

The shot. Everyone knows ‘The Shot’. Not only did Christian Laettner hit one of the most memorable shots in all of basketball history, but he was one of the best to play at Duke University. While Laettner stayed all four years, he was a two-time National Champion in 1991 and 1992 and was awarded the AP Player of the Year in the 1991-92 season. Christian Laettner was one of the guys to turn Duke Basketball into what it is today.