Should Chris Jans or Jason Shay be the next East Tennessee State basketball Head Coach? 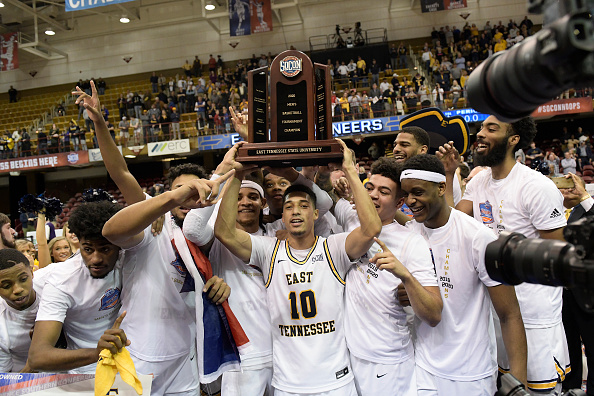 East Tennessee State basketball just came off its best season in school history. Buccaneer fans were hoping Steve Forbes would survive the coaching carousel, and things were looking good until Danny Manning was fired at Wake Forest. With Forbes taking over in Winston-Salem, ETSU is now looking for a new coach to carry on the success the program has seen over the past five years. The question is whether that should be New Mexico State’s Chris Jans or interim head coach Jason Shay.

Under Forbes, the Buccaneers are coming off their best five-year stretch in school history. ETSU went 130-43 under Forbes’ tutelage, winning at least 24 games per year in his five seasons in Johnson City. That included two regular-season titles, two conference tournament championships, and one NCAA Tournament appearance. They would have been back there this season if not for the COVID-19 pandemic.

East Tennessee State never finished below third place during Forbes’ time as the head man, which is impressive given the increasing strength of the Southern Conference over the past few seasons. Furthermore, all 22 seniors during that time earned their degrees, showing that academics are just as important as skill on the hardwood to the school. The Bucs are set up to continue to compete with a solid incoming recruiting class, including transfers Jalen Johnson (Tennessee) and David Sloan (Kansas State). Who should step in and take the reins?

Why Jason Shay is the Answer

Jason Shay came to East Tennessee State with Forbes as an assistant in 2015-16. He has been there every step of the way in building the program into a Southern Conference powerhouse. Shay has been an integral part of the recruiting trail during his time at ETSU, helping to land key transfers from the Division I and junior college levels.

He should be selected because he already has familiarity with the program. Stability can be important, especially during times like these, when face-to-face interaction with players and other staff members is limited. Shay should be able to step right in and understand the expectations for the basketball program. Hiring Shay would also be key to keeping the incoming recruiting class intact, as there always seems to be a player or two that opens their recruitment back up when a coaching change occurs.

Furthermore, he has the support of his former boss. Forbes backed Shay as his replacement after taking the Wake Forest job, and the fanbase seems to be keen on him being the choice as well. The biggest downside to picking Shay is that this would be his first head coaching gig. Still, he seems like a no-brainer.

Why Chris Jans is the Answer

Instant success is something Chris Jans has seen during his three years at New Mexico State. All he has done is go 83-17 and capture three WAC regular-season titles and two conference tournament championships. Conference foes are hard-pressed to beat Jans’ Aggies’ squads, winning just three times in 46 tries. He has ties to Steve Forbes, as both were assistants under Greg Marshall at Wichita State during the rise of that program.

Jans should be chosen because he is a proven winner at the mid-major level. He knows how to keep a successful program running, as he stepped into a similar situation when he arrived at New Mexico State. Jans also has a knack for recruiting transfers, something that has helped with ETSU’s model of success. This would be a step up for Jans as well, as the overall level of competition in the SoCon is better than the WAC. Time would tell if staying at New Mexico State is the path to an eventual Power-5 job, but having success at ETSU would almost certainly make that a possibility.

One thing that does stay with Jans is an incident that occurred when he was a first-year head coach at Bowling Green in 2014-15. He was let go after an incident at a bar in which he inappropriately touched and spoke derogatorily to multiple women. The incident appears to be behind Jans now, and certainly, officials with East Tennessee State will thoroughly vet his background as they go through the hiring process.

Jason Shay. Chris Jans has the proven track record, but Shay has the experience with the Buccaneer program and the players on the roster. While it may be his first time as a head coach, what better place for that to happen than a school you already have been at for five years? This would follow a similar outcome to conference foe Wofford when Virginia Tech lured Mike Young away last season. The Terriers came off their best season in school history and stayed in-house with associate head coach Jay McAuley being promoted. Like Forbes has done with Shay, Young also recommended that McAuley be his replacement when he left. While East Tennessee State basketball will go through the proper hiring process and do a nationwide search, the answer is already sitting in Johnson City. Hire Jason Shay.