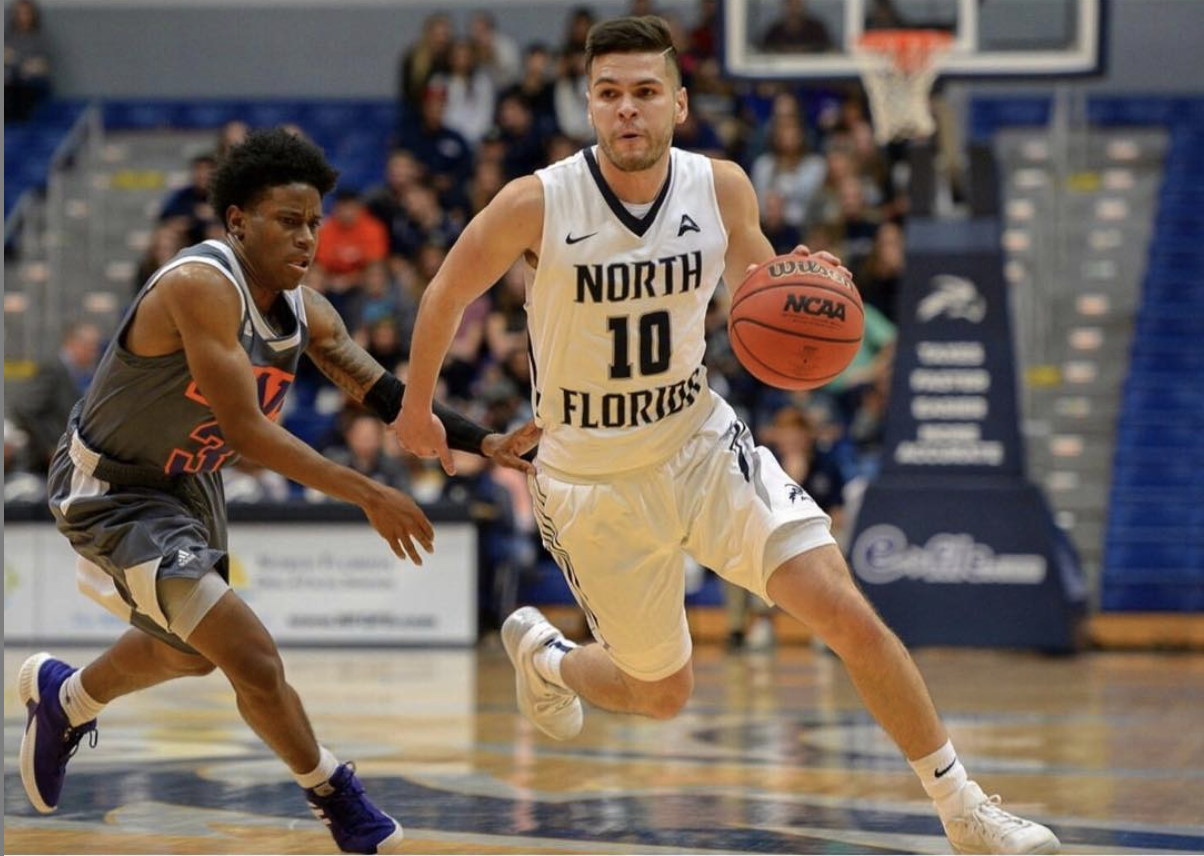 Ivan Gandia Rosa is an all time talent for North Florida basketball. This year didn’t end how he wanted it to, but his game speaks for itself.

Ivan Gandia Rosa, the 6’1 194 lb guard from Caguas, Puerto Rico knows a thing or two about passing. In fact, in his three years with North Florida basketball, he became the all-time leader for assists in school history. If that’s not impressive enough, he is third in assists in ASUN history and second in assists per game. His pass-first mentality let him achieve in those three years what many top guards can’t do in four.

As Ivan moves on to the next step of his career, he will go down as one of if not the best player in North Florida basketball history. I asked him a few questions about his college career and his reflections on it.

1) You spent one season at a JUCO school and came out as one of the top players. What made you decide on North Florida basketball for your next three seasons?

Ivan: Coach Driscoll and the whole coaching staff came out and saw me play in one of the games and I didn’t even know if they were coming to watch me. After that Coach Driscoll came and watched me practice like three more times. He wanted to talk not only about basketball but also about life and how to become a better person and man if I came to this program. I talked to my family about this and he was the only one who talked to me like this, so at the end of the day, I felt like that was the best choice for me and the one I felt most comfortable with.

2) You’ve stayed pretty consistent stat wise the last three seasons, but what is one thing you’ve improved on that won’t show up on the stat sheet?

Ivan: Leadership and being more vocal on the court. I’ve definitely grown in that aspect of my game, and the coaching staff and my teammates have played a big part in that because they trust me to make those decisions. It’s something I wanted to do and something that just happened. I was looking forward to having this role with the team.

3) What was your reaction when you heard the tournament was canceled? Do you agree with the decision?

Ivan: It was definitely hard, especially now that I would have been getting prepared for it. It definitely sucks, because not only did the tournament get canceled, but everything else is on pause. There’s a lot of exposure in the tournament for a whole lot of players, and this year was very unpredictable. I was also scheduled to be in Atlanta for the Final 4 participating in the 3 on 3 tournament, so not only me but a lot of other players missed out on exposure and a lot of good basketball for sure.

4) Passing has always been a big part of your game, and last season you finished 16th in the country in assists per game. What do you enjoy the most about finding open teammates and being a pass-first player?

Ivan: Ever since I was young, I’ve played on the junior national team for Puerto Rico, and the big message was you make the team better by making your teammates better, that has always stuck with me. I always want to make my teammates better and put them in spots. I don’t even care if I’m scoring as long as we’re winning. I genuinely enjoy giving them the ball and having them score, and that message has really helped me cause now I get to see this on film and fix it.

5) What was it like to represent Puerto Rico on a global stage?

Ivan: It’s a blessing and an honor. I’ve been watching the Puerto Rico national team with Carlos Arroyo and JJ Barea, those were the guys. Once you get to that point in your life and you’re given that opportunity and are chosen to do it, at first I was a little bit nervous but once I’m there, I was ready to go. It’s pretty amazing to transition from you looking up to players to players looking up to you.

6) What was your reaction when you heard you made the ASUN first team?

Ivan: I got super excited and happy. It was a tough season and eventually, we won the regular season co-championship with Liberty, so I really enjoyed it. I saw all the posts and tweets about it and a lot of people were extremely happy for me and my teammates, but we immediately turned our attention to the conference tournament. I enjoyed it for a couple hours and then got right back to work.

7) North Florida went from a losing record last year team 9 games over .500 and a share of the conference title. Would you say that was your biggest accomplishment in your 3 years?

Ivan: That is definitely the biggest one. In my junior year, we had a really good team but didn’t do as well as we would’ve liked, so for this year we focused on how to make sure this didn’t happen again. Our five seniors stepped up this year because we didn’t want that to happen again and eventually got to the regular season championship. It was a blessing, but it wasn’t easy and we worked hard for it so it felt good to be rewarded with that.

8) What is one aspect of your game you’d like to focus on more in the future?

Ivan: I want to keep working on my body, I feel like I could be in better shape and be a little quicker and more explosive. This is hard right now because nothing is open and we don’t have access to the facilities but that will be the biggest game-changer for me moving forward.

9) Now that you’ve graduated, what are your next steps?

Ivan: Hopefully, play professionally for as long as I can, and then hopefully stay involved in sports and give back to young players like a lot of coaches have to me. No one has really reached out to me right now because all the leagues are paused, but I did get drafted in the Puerto Rican league, but that league is on pause. Hopefully, this virus ends soon and I can start working out and get ready for what the future holds.