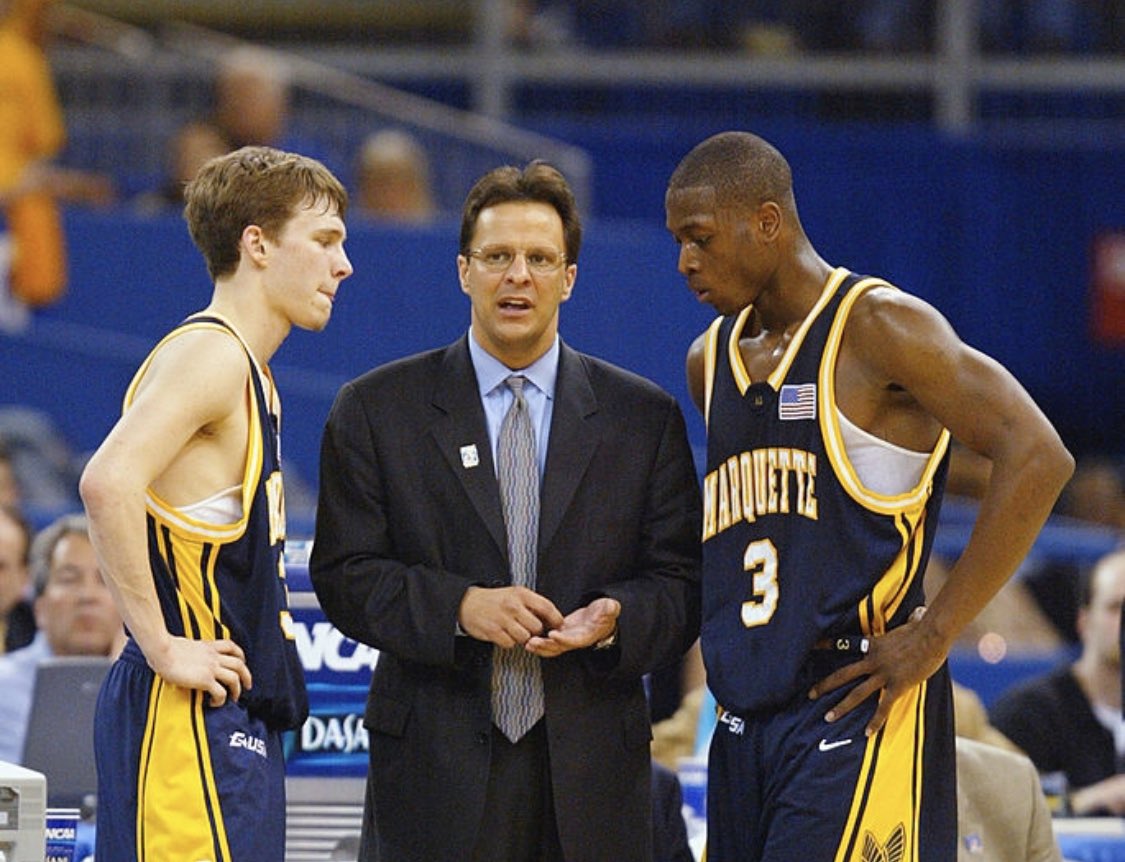 From 2001-2005, Travis Diener was one of the best sharpshooters in college basketball, helping lead Marquette basketball to the 2003 Final Four.

A teammate of Dwyane Wade and Steve Novak, and coached by Tom Crean, Diener quickly adjusted to the college game, and became one of the top scorers in Marquette basketball history, averaging nearly 20 points per game over the course of his junior and senior seasons.

After playing in the NBA with the Orlando Magic, Indiana Pacers, and Portland Trail Blazers, Diener has found success overseas in Italy, and more recently during the yearly summer event, ‘The Basketball Tournament’.

I caught up with Diener about his time with Marquette, what made the ’03 Final Four team so special, and why he loves the TBT:

ME: What other teams were you recruited by and why did you ultimately choose to play at Marquette?

TRAVIS: My final five schools were Wisconsin, Marquette, Utah with Coach Majerus, Iowa State with Coach Eustachy, and then Saint Louis who had Coach (Lorenzo) Romar and my (older) cousin was on the team there at that time. So those were my final five.

It ultimately came down to Wisconsin and Marquette, mostly because of a proximity to home. I wanted to stay close enough to home where my family and my parents could come watch me play. Between Marquette and Wisconsin at that point, Wisconsin head coach Bennett there in his system. As much as I love the Bennett family, that system I don’t think was ideal for the way I play.

I chose Marquette and Coach Crean because of the vision he had of first myself as a player, and then how he saw our team succeeding in the four years that I would have been in school.

ME: Some of your teammates then were Dwayne Wade and Steve Novak. What was that like and how did that help you excel and become a better basketball player over time?

TRAVIS: As a basketball player, you’re always part of the team. You want play with good players, because that ultimately is going to help your team.

Me and Dwyane were at the same age athletically. His two years at Marquette were my first two years playing. You learn a lot from watching great players and his preparation, the way he worked, back then he was more of a silent leader. He didn’t say a whole lot, but he came and worked every day. He really worked hard. He was unselfish. For a guy that was a First Team All-American and one of the best players in the country, you would hardly see him pick bad shots. He always almost too unselfish, which is a credit to him. And I think that’s why he succeeded at the, at the next level as well so much because he did sacrifice, he did play unselfish.

Steve is a year younger than me, so I got to play three years with him. Steve’s ability to shoot the ball was beneficial for me and our team just because the spacing and he made me look good because, if you passed it to him it was usually going in, so it made me look good as a point guard. You love to play with guys that can really shoot the ball as a point guard. He was such a great shooter and everybody would always be telling him what you need to work on other things. He did that, but he never lost focus on his greatest skill and that was shooting the ball and he’s always in the gym, I mean countless hours. He would always be drilling that, you know, being on the gun shooting and I’ll never forget, he’s one of the hardest workers I’ve played with.

ME: So when you look at you three guys leading Marquette to the 2003, Final Four, what really brought the team together and was there a moment in that season when you knew it was going to be something special?

TRAVIS: We played for Coach Crean and at that point I think coach had lightened up a little bit. We got him when he was relatively new into his head coaching career, so he was very hard and demanding. I think as players we came together, because we knew every practice, every drill we went through was going to be a war. That just brought us closer together with coach being on us and being very hard at times. Everyone had their turn during the course of the season of getting yelled at, or things of that sort, so I think that just made us closer. Collectively, we were extremely unselfish. Nobody really cared who was scoring. It was more about how we could succeed as a team.

The point of the season where I think we all knew that we had a chance to be pretty special actually happened late in the year. We knew we were good, but to make it to the Final Four, you have to have a little extra. We had just lost to (number 2) Louisville at home on a buzzer beater, three by Reece Gains. Ten days later we went to Louisville for a rematch. Basically whoever won that game was going to be in control of winning the (C-USA) Conference Championship. We got down I think 17 to 19 points the first half. And it looked like, we’d get run out of the building and we ended up coming back and winning that game. I think that’s when we knew we have something special here to go on the road, to get down close to 20 points in a hostile environment and come back and win.

ME: I’ll take you to that Kansas game. When you look back at that game, is there anything different you guys think you should have done either in preparation or during the game that might’ve changed the outcome?

TRAVIS: I mean the game was such a blow out, it’s hard to say. I guess he could have done everything different. Collectively we just didn’t play well and you got to give credit to Kansas too. They made us not play well.

The week before, we played our best game of the season against the best team in the country and really took out Kentucky. The game wasn’t really that close. And then the following week you don’t play well at all.

At times we tried to run with Kansas because that’s all we like to play. We like to play a little uptempo. I think running against a team like a Roy Williams team can be detrimental. And we tried to do that, unfortunately it didn’t work. It just never was a close game, and unfortunately in sports, that’s what happens sometimes.

ME: You mentioned how Tom Crean, the way that he was so hard on you guys really helped you during that season, but how did it also help you personally, you know, prepare for your professional career?

TRAVIS: I think anyone who played for coach and didn’t end up transferring because it was too difficult, came out of that a lot better off in whatever they’re doing. It’s supposed to be hard. Being successful isn’t easy in any profession. You’re gonna have to go through days where you’re dealing with a lot of adversity, whether that was coming from Coach or coming from other areas of your life, just to hit it head on and try to get better every day.

Going to Marquette, to be honest, I never dreamt that I would play in the NBA. At a certain point he had me believing in that and working on things that could get me better to try to accomplish that goal and his vision for me and our team. Like I said before, that’s what drew me to Marquette and it was everything that he talked about and it became true. We had team success and I had individual success as well. I don’t have nearly the professional or collegiate career without him. He’s meant a lot to me.

ME: So I want to take you to the current Marquette team. Obviously, you own or are near the top at a lot of the Marquette records, but recent guys like Andrew Rowsey and Markus Howard have broken those. What can you say about Marquette’s ability to year after year recruit these flat out scores?

TRAVIS: I was considered undersized, but those two are even a couple inches shorter than I am. Their ability to shoot the ball and with range and get their shots off is really fun to watch. To see it firsthand with those two is something special. It’s hard to find.

I think when you go throughout the career, over the last 10 to 20 years of Marquette basketball, the selling point is we do develop NBA players. If you look around the NBA, there’s Marquette pretty much all over. Obviously it started recently with Dwyane, but then you have Jimmy (Butler), Wes Matthews, and Jae Crowder.

When you have those guys represent Marquette and you see that they came from Marquette, kids ultimately want to go to a program where you can develop into an NBA player or a professional player. I think that helps and I think obviously the style play with Coach Wojciechowski is really up tempo, and there’s a lot of spacing. There’s a lot of freedom offensively so that’s going to draw guys like Andrew and Markus who can really shoot the ball with range and can get away with taking a few bad shots a game.

ME: You’ve had some good runs in the NBA and in Italy, but over the past few seasons joining that Marquette alumni team at ‘The Basketball Tournament’, what can you really say about that tournament?

TRAVIS: Yeah, it’s a lot of fun. It’s hard to find really good basketball in the summertime. It’s extremely physical, maybe the most physical basketball I’ve ever played because referees aren’t going to try to decide the winners of a $2 million prize.

It’s great to get back and play with guys that I’ve never played with, but worn the same jersey at Marquette. I’m obviously the oldest guy, so watching these guys after I was done and now getting a chance to compete with them, it just brings together that camaraderie from each school.