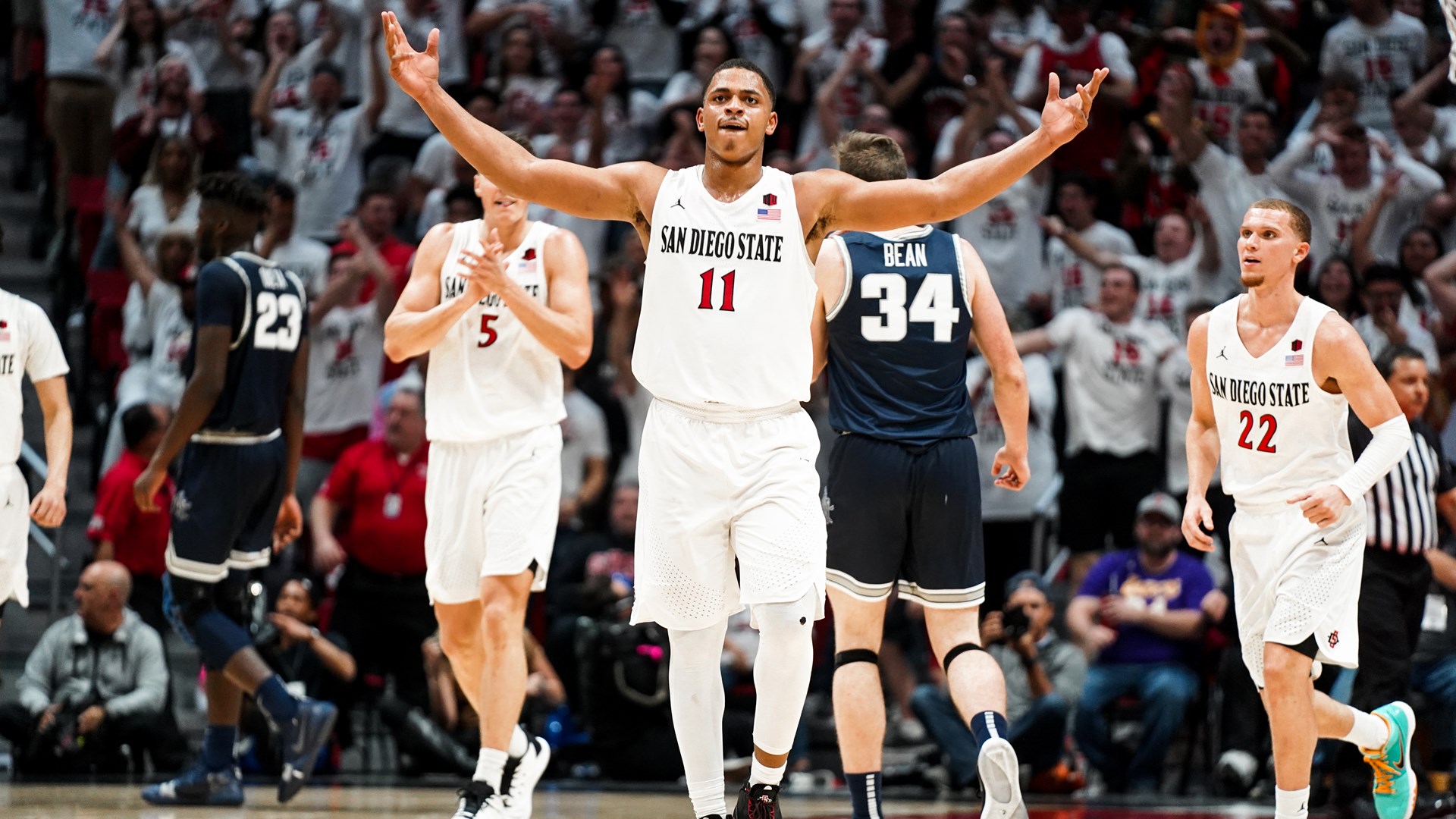 Yes, the most unthinkable and outrageous season in the history of the San Diego State Basketball program ended abruptly in a lamentable fashion.

Honestly, they were an incredible team.

They topped BYU by five at the ruckus Marriott Center, and BYU then eventually took down Gonzaga. 20 days later, they took down Iowa and All-American, Luka Garza, by ten. Then just a short eight days ensuing that win the Aztecs casually beat the regular-season Big East champion Creighton Bluejays by 31. They almost broke a sweat, phew! Finishing the season at 30-2, and 17-1 in conference play, it was quite remarkable. Both of the losses were in one-possession games, while one was an outrageous game-winning shot from the ice-cold blooded Sam Merrill. The shot is worth watching again, so here it is. Speaking frankly, the Aztecs could have been 32-0 without a doubt.

Even though the team didn’t get a chance during the tournament, they were bound to thrive in it. They were likely going to be a 2-seed near San Diego, because of the loss to Utah State. Yet, they will be a very legit contender for recent and future years to come. Transfers are coming in, recruits are coming, and players are staying, resulting in putting the whole college world on immense notice.

The thing that is extra striking is that they probably will have a couple of their best players set to return next season, with one of them being Matt Mitchell. Man, was he an animal on the court. The 6-foot-6-inch, 240 pound forward from Riverside, California, averaged 12.2 points per game, 4.8 rebounds, and dished 1.7 assists, in only 25.8 minutes per game. In addition, he shot 39.3 percent from beyond the arch, only behind the dead-eye shooter Jordan Schakel who is also set to return next year as well. But the best way to describe Mitchell is that he is an “electric player.” When the game was on the line, you would see him involved in the play, and when you would see him rise to dunk, you would want to get out of his way.

Oh yeah, Head Coach Brian Dutcher also recently grabbed a stud from Cal State Northridge, Terrell Gomez. He averaged a hair under 20 points per game last season, and can score from all three levels. If the NCAA grants transfers immediate eligibility and Mitchell stays, these two will undoubtedly become some of the most solid teammates around.

Furthermore, this past phenomenal season is going to pave the road to success in the future. Head Coach, Brian Dutcher is on the rise, grabbing players left and right. His name is becoming a household college basketball name and is starting to seriously rise.

It goes to show that Dutcher and company aren’t just looking for one and done guys, but are also already looking into the future to grab really solid guys off the recruiting table, and one of them could possibly wind up being Ramel Lloyd.

Lloyd, the 6-foot-6-inch sophomore who is a small forward on paper, but ended up playing point guard, attends Taft High School in California and is being heavily recruited. On 247Sports, he is ranked 57th in his class. He was so dominate on his team, that he had to run the point guard position.

Not to mention, but Taft is pretty close to the SDSU which helps greatly.

I was lucky enough to call Ramel Lloyd and chat about his recruiting experience so far. I asked him a question that was:

“Have you visited any schools yet?”

His answer pleasantly surprised me because he said:

In my head, I was pumped because one of them was San Diego State. However, at the same time, I was surprised just because San Diego State isn’t one of the blue bloods or the “powerhouses” in college basketball.

Well, I hope to stop saying that soon, because seriously SDSU is climbing, and climbing fast. This is just one of several guys that are on their radar for the future, but a good one.