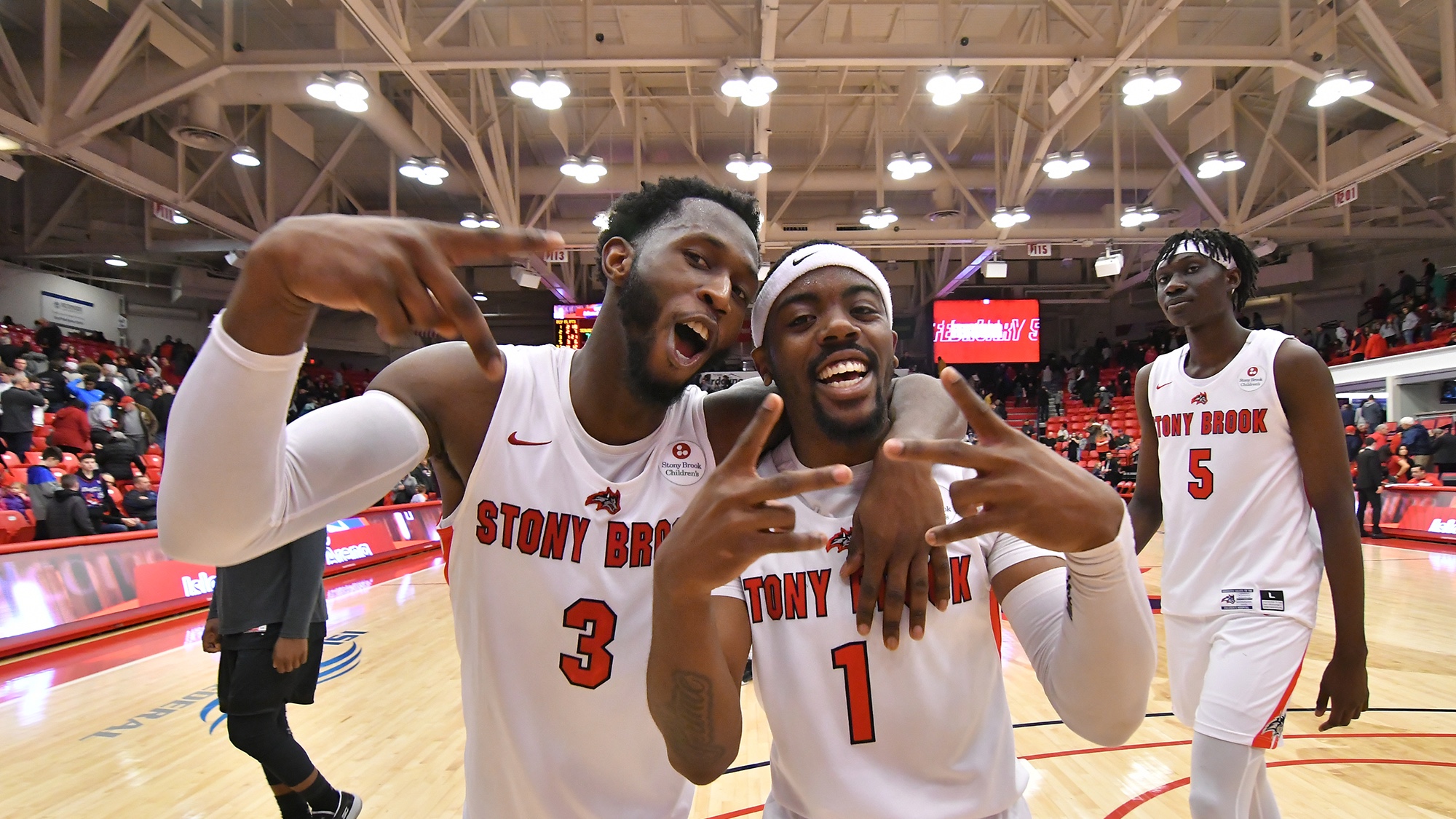 Elijah Olaniyi and Makale Foreman were key parts of a Stony Brook team that not only met but exceeded expectations.

Olaniyi, an all American East First Team member, had an incredible season averaging 18 points per game, 6.5 rebounds, and even added 44 steals in 28 games. He scored 33 points in a win this season, a career-high, and still made the first team despite missing 5 games to an injury.

Foreman had a season to remember as well, especially from the three-point arc. He became the teams’ all-time leader in three-pointers in a season with 104, which is second-most in American East history, and tied the record for most threes in a game with eight. He finished the season averaging 15 points a game, shot 85% from the free-throw line, and started in all games but one.

In an interview with the two of them, I asked various questions about their seasons, their reactions to the cancellation of the tournament, and more.

1) What was the main reason you picked Stony Brook as your school of choice?

Elijah: Stony Brook was somewhere I knew I was going to leave a lasting impact. I played right away and I felt needed.

Makale: I chose Stony Brook because of the area, past reputation and when I met the team we clicked like we were already teammates.

2) After having a career year, what was one thing you changed the last two seasons to get to this level?

Elijah: To be honest, I don’t feel like I had a great work ethic, and I ramped it up a notch this past offseason. We also had a coaching staff change and Coach Geno Ford had the utmost trust in me to go out there and perform, and that was the biggest thing for me this year.

Makale: I evolved my outside game allowing me to shoot from NBA range and consistently make it.

3) What was your reaction when you heard the NCAA tournament was canceled?

Elijah: It was actually surreal, that’s the only way I can explain it because everybody’s hard work, no matter who you were was put to the side; it didn’t even matter this year. Nobody is able to go on that big stage and show what they’ve been working for all year. I thought they were gonna play the tournament with no fans, but I was in shock that they canceled everything, they didn’t even put out a bracket.

Makale: I was in shock when I heard they were canceling the tournament but I knew it was coming. The coronavirus is being taken very seriously as it should be and the safety of everyone is the first priority.

4) You played some big-time names this season, leading Seton Hall at half, losing to Providence by only 4, and stayed competitive with Virginia. What did you learn from playing these top teams?

Elijah: For my team, it showed us that we’re very talented, and for a team that had no seniors we were very proud of ourselves of what we were able to accomplish this year. Individually, it showed me that there aren’t too many people out there that are better than me, and I can compete with anybody.

Makale: I learned that if you come to play and have the right mentality anybody can beat anybody.

5) As a senior next year, do you plan on taking on a mentor role to the younger players?

Elijah: I’ve always been not the upperclassman but always the leader on our team for the last three years. I’m really not going to change anything I’ve done, and I feel anybody on the team looks to me for experience because I have played the longest on the team. It’s already been a mentor-mentee role, and I’m going to take the new guys in the beginning under my wing and show them the way we do things.

Makale: Yeah I will and am already accustomed to it because I had to do it this year. Being one of the leaders I had to be ready whenever I was needed.

6) What is the most memorable game you’ve had in college?

Elijah: My most memorable game was probably when I scored my career high. I had 33 in conference play. I felt like everything was clicking that night, I couldn’t really miss. Not only offensively but I was in the right place at the right time on defense, I was vocal, we had a great gameplan and I had a great game all around.

7) What is one thing you are focusing on this offseason to become even better?

Elijah: This offseason, I just want to separate myself. I want to show everyone that even though I do go to Stony Brook, and we’re considered a mid-major, I’m a pro. Not only me, but my team can play with anybody, and hopefully we can show that next year.

Makale: I’m going to focus on attacking the paint and getting to the rim or finding teammates for open shots.

8) What basketball player did you model your game around?

Elijah: Kobe Bryant and Jimmy Butler. Everyone that knows me knows I am the ultimate Kobe fan, so I modeled my game after him and his work ethic every game. For Jimmy Butler, he’s somebody who has the same physical stature as me, and has the same gritty energy to win

Makale: I would say I modeled my game around Steph Curry because of how he can score from every level (paint, mid-range, and three-pointer), and make his teammates better

9) Do you have any team and individual goals for next season?

Elijah: For my team, championships and making the NCAA tournament. For me, I actually got hurt this year and I felt that I should have won player of the year this season, so my goal is to do that next season.

Makale: The team goal is definitely going to be winning an American East championship but that won’t be easy at all. I would like to make an All-Conference team because I felt like I was snubbed of a spot this year.