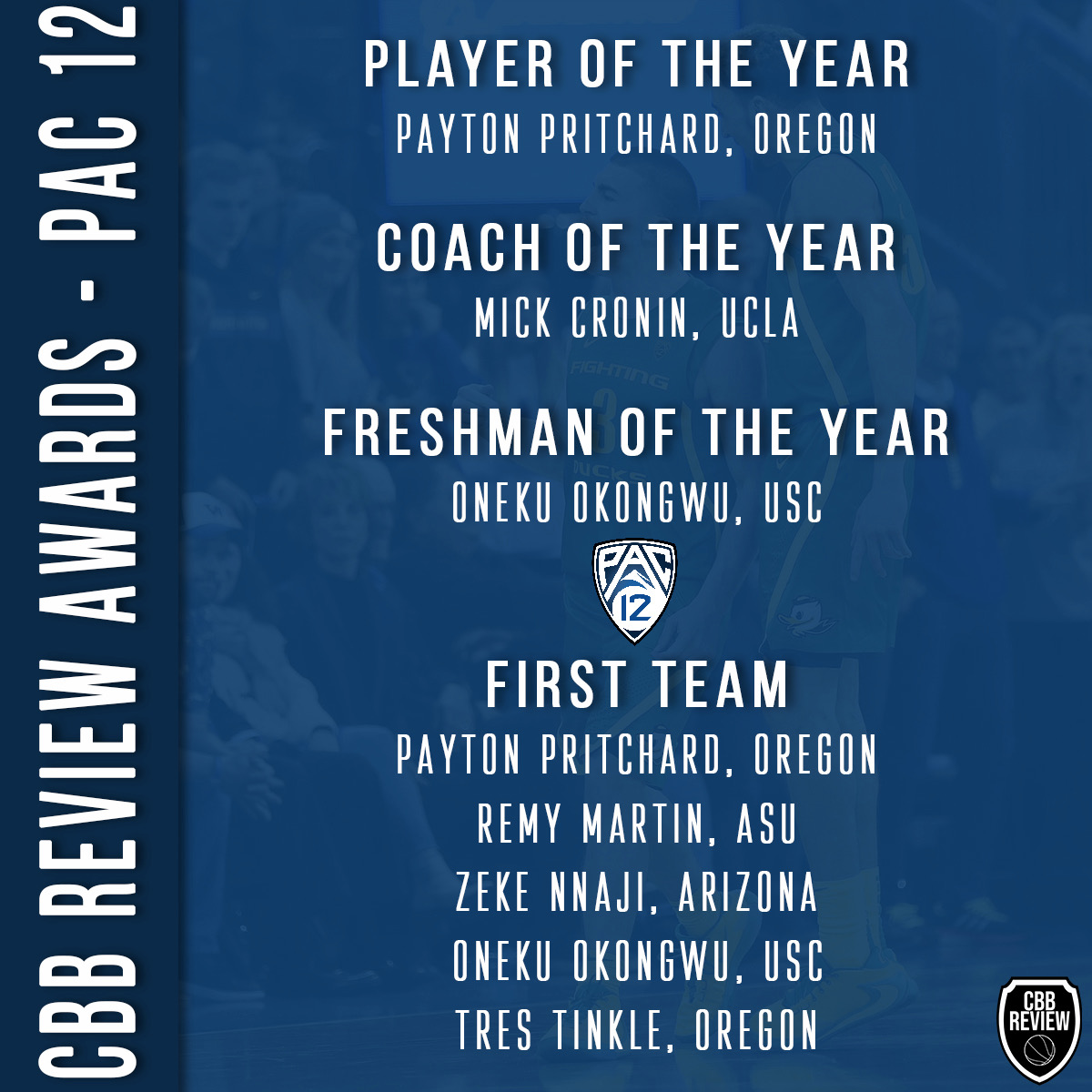 The conference of champions gave us many spectacular moments throughout the season. The UCLA Bruins went into conference play with a record of 7-6 and the surprising transfer announcement from Shareef O’Neal. Their season seemed to be lost and no one thought they could compete in the conference. UCLA went on a 7-game win streak and second place finish in the Pac-12, which secured them a bye in the first round of the tournament. The Oregon Ducks won the Pac-12 regular season title and played to their high expectations. Oregon is a strong contender to win the national championship with the Naismith player of the year candidate Payton Prichard. The Arizona Wildcats showed how young they were relying on three freshmen to carry the team. Nico Mannion showed flashes of how great he will be in the NBA, Josh Green is very athletic and improved his defense a lot, and Zeke Nnaji is a walking double-double who exceeded expectations. The Arizona State Sun Devils and the USC Trojans finished much higher than where they were picked to be and can win some games in the tournament. The Washington Huskies lost their best payer due to academic ineligibility, but they are the most dangerous last place team in the country. They still have a lot of talent and could potentially win the Pac-12 tournament. Now it’s time to see who took home the awards and which team will win the conference of champions.

Oregon State has one of the top players in the Pac-12 and that’s about it. They were very strong at home with quality wins, but they only won three games on the road all year. Utah had a very strong win in non-conference against Kentucky, but the season went downhill. Utah won the first matchup at home and Oregon State won the second at home. Tres Tinkle will be the key to this game, but this will be a close one.

Arizona will rely on the play of their three talented freshman, Nico Mannion, Josh Green, and Zeke Nnaji. This is the most interesting games in the tournament because Washington has a lot of talent and will get back Quade Green from Academic suspension. In the season finale, Washington went into Arizona and won. The key for Arizona is to get a lot of production from Nico Mannion and the key for Washington is to keep the momentum going from their road sweep of Arizona and Arizona State last week.

One of the most historic rivalries in college will be on display in Las Vegas when Stanford takes on Cal. Stanford must win this game in order to stay on the bubble for the NCAA tournament. They will need a big game from Oscar Da Silva who is their leading scorer if they want to win a close game against a scrappy Cal team.

Tyler Bey and CJ Elleby will be going at it in Las Vegas and will put on a show for the fans of the conference of champions. The difference in this game will be the depth Colorado has on Washington State. Expect this game to be close in the first half, but Colorado will pull away in the second half and look forward to the second round.

The best team in the conference should have it easy in this game against Oregon State. Payton Pritchard and Chris Duarte will shine and put Oregon over Oregon State. The key for Oregon State will be a huge game from Tres Tinkle and stopping a high-powered offense. Oregon is deep and will handle Oregon State easily.

The last time these teams matched up, USC took care of business at home. Arizona was without Josh Green, so his presence will absolutely make a difference. The key for Arizona will again be the play of Nice Mannion, but will also need Zeke Nnaji to out play Onyeka Okongwu. USC will need to win this game in order to solidify a spot in the tournament or else they will be praying on selection Sunday.

UCLA is riding high winning seven of their last eight games of the season. They lost on a buzzer beat to USC by Jonah Matthews. They will take their momentum and continue to make the case to the selection committee why they deserve a bid. A win over Stanford would keep them in the first four in section of the bubble, but a loss would have them on the outside looking in. Stanford will need everyone’s best game if they want to stop the red-hot bruins. A win for Stanford would allow them to be comfortably in the tournament.

Arizona State will have the upper hand on Colorado because of the bye they received for finishing in the top four in the standings. Remy Martin is fresh, and it will show with the big game he will have. Colorado is experienced and will test Arizona state till the final buzzer, but they will be very tired after their game against Washington State. They key matchup to watch is Martin vs McKinley Wright IV. If Arizona State gets a big game from sixth man of the year, Alonzo Verge Jr., they could pull away by half time.

Oregon and Arizona have faced off twice and both games went into overtime. These are the two most talented teams in the Pac-12 and it will be a very close game. The difference between these teams is coaching. Sean Miller will need to find a way to contain Payton Pritchard, who burned Arizona for 38 points the last time they played each other. If Arizona forces Oregon to make Pritchard give up the ball, then they will have a serious chance to pull off the upset.

Mick Cronin will have his hands full with trying to contain Remy Martin and Alonzo Verge Jr., but with Tyger Campbell and Chris Smith at the top of their games Arizona State won’t be able to keep up. The key for UCLA is Cody Riley and Jalen Hill to stay out of foul trouble. They will both have their hands full with Romello White and Kimani Lawrence. UCLA is not extremely deep with their forwards and early foul trouble can play into Arizona State’s advantage.

This will be a very high scoring game if these teams meet in the finals of the Pac-12 tournament. Arizona State will need a team effort in order to beat the mighty ducks. If they start to rely on Remy Martin and Alonzo Verge Jr., they will get in trouble and won’t be able to come back. The key for Arizona State will be a fast start and stay ahead of Oregon. On the other side, Oregon needs to stay out of foul trouble and use their talent to get past the Sun Devils. If Oregon is able to win the conference tournament, they have the potential to get a #3 seed in the West. Expect Oregon to come out hot and lead the whole game on their way to a championship and a ticket to the tournament.