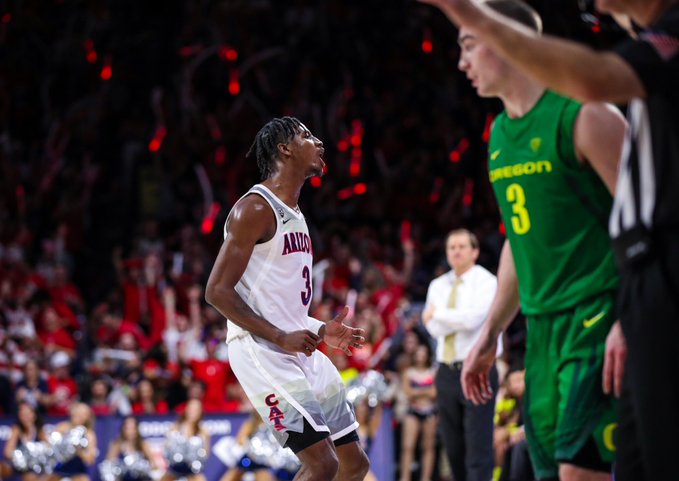 Can you believe it?  Selection Sunday is under one month away, which means that very soon, college basketball will rightly be taking over the sports world.

At this point in time, there are a lot of teams that are locks for the ‘Big Dance’.  With that being said, there are also numerous teams with a little bit of work to do, and many more hanging on by a thread, or should I say, trying not to be ‘popped’ off the ‘bubble’.

Florida State: Nope, not Virginia.  Not Duke.  The Noles are the top team in the ACC.  One of the best home court advantages in college basketball has helped Leonard Hamilton’s defense minded team with scoring options rattle off four straight wins and seven of eight.

Duke: The recent losses to Wake Forest and NC State give me reasons to second guess how far this Blue Devils team can go in March.  With that being said, they can lose out and still be a 6-seed, so there’s no reason to panic in Krzyzewskiville.

Louisville: Like Duke, the Cards have struggled as of late, and it’s really been the fact that Jordan Nwora has not been the Jordan Nwora we all thought he would be.  This is still the 11th ranked team in the current AP Poll and NET rankings, so again, no reason to freak out just yet.

Virginia: The defending champs have had an up and down season, but wins over Florida State, Vermont, and Arizona State should be enough for this 19-win team to impress the committee.  Duke and FSU in the last four regular season games poses a threat, but a 21 or 22 win Virginia will be in.

NC State: While there are many other ACC teams with ‘bubble’ status, NC State is the only true team with an actual gripe.  The Wolfpack recently got their signature win, in a 22-point blowout over Duke.  Finish ACC play over .500 along with 20+ wins and NC State will be dancing.

Kansas: The Jayhawks have been a lock for quite some time now, and are arguably the top team in the nation.  Devon Dotson, Udoka Azubuike, and co. have been OUTSTANDING, giving RCJH Nation a reason to stand up.

Baylor: The Bears split the season series with Kansas and are top-three in quadrant one victories.  Next.

Texas Tech: The defending runner-ups are literally one win away from solidifying themselves of a lock.  However, that slim chance that they lose all three of their remaining games to Texas, Baylor, and Kansas is actually very possible, and would leave them at 18-13 (9-9) going into the Big 12 Tournament.  Just one win out of these three would let Red Raider fans sleep at night

West Virginia: Again, 16th in the NET is hard to argue with, but this is a worst-case scenario.  Bob Huggins should be able to guide his team to one or two wins against Oklahoma, Iowa State, and Baylor.  However, that 7-8 conference record is suspect, so those one or two wins are more important than they might seem.

Texas: The Longhorns’ recent dub against West Virginia elevated their bubble status x10.  Ending with Oklahoma and Oklahoma State is also favorable, perhaps serving as a gateway to help Shaka Smart’s team get to the 20-win mark.

Oklahoma: Like Texas, Oklahoma also picked up a very important win over Texas Tech last game out.  That matchup against the Longhorns will be very key, especially if these two rivals are in serious bubble talks on Selection Sunday.

Seton Hall: Myles Powell has really struggled with his shooting for the better part of February, but his ability to get other guys involved – who have been excelling – has been a huge reason that this team has 10 quad-1 wins.

Creighton: Arguably the hottest team in the nation, the Blue Jays have silently built their record to 22-6, just one game out of the Big East lead.  Three wins against St. John’s, Georgetown, and Seton Hall, and we could be talking 1-seed.

Villanova: Nobody is talking about the Wildcats, which seems strange, and potentially could work to their benefit.  21-6 (10-4) is pretty good, and it’s still a Jay Wright coached team with plenty of talent.

Butler: Butler’s high has been No. 5 in the nation, but they are currently at their low, with a 19-9 (7-8) record.  They don’t have any more great win opportunities in their Big East schedule.  However, if they do defeat DePaul, St. John’s, and Xavier, it’s all the sudden a Bulldogs team with 22 wins even before the Big East Tournament.

Marquette: Markus Howard has been fantastic this season, but the Golden Eagles have hit some rough stretches and are in one of those right now.  Like Butler, they have a favorable schedule, besides Howard’s senior night, when they welcome in Seton Hall.  Golden Eagles should be in, but two more wins would alleviate any concern.

Providence: The Friars had one of, if not, the worst non-conference of any power conference team that had some type of expectation before the season started.  So, how’d they turn it around?  Just a 9-6 Big East record which includes wins over Marquette (twice), Butler, Creighton, and Seton Hall.

Xavier: At 18-10, the Musketeers have the record of a team that could get in.  However, 42nd in the NET is shaky, and they lost most of their games against ranked teams this season, with the exception of one against Seton Hall.

Maryland: The most locks of any conference at this time in the season, the Terps are clearly above the rest.  Ninth in the nation in the AP Poll have the Terrapins in first in the Big Ten.  Jalen Smith and Anthony Cowan are a top duo in the country as well.

Michigan State: Last night’s win over Iowa was huge for a Spartans team who now has four wins over teams ranked at the time of the game.  Cassius Winston needs to play better if this team wants to make a run, but this team will be in the NCAA Tournament without a doubt.

Penn State: No, this isn’t a football article.  Penn State is just that good.  Lamar Stevens and Mike Watkins serve as very tough big guys to guard, and the Nittany Lions have really rolled through a tough Big Ten slate.

Iowa: Having Luka Garza would make any team a lock, but this is already a very talented team without him.  No one wants to play the Hawkeyes come March.

Illinois: Again, speaking to the depth of the Big Ten, Illinois would be top three in any conference this season, besides the Big Ten.  Northwestern next followed by Indiana, Ohio State, and Iowa isn’t too easy, but a 2-2 finish would be ideal and get the Illini in.

Wisconsin: If you’re against teams with under 20 wins getting in the NCAA Tournament, then the Badgers have work to do.  Games against Minnesota and Northwestern could help, but they can’t sleep yet.

Michigan: The Wolverines have been the most up and down team all season long.  Zavier Simpson is one of the top guards in the nation, and he will need to lead them to a few more wins to help their status.  Three of their final four are TOUGH.

Rutgers: Sure, the Scarlet Knights are 18-10 (9-8) in the top conference in the country, with a big non-conference win over in-state rival, Seton Hall.  However, they have just ONE road win all season long, and it was AT Nebraska.  That’s may affect seeding, and they should be in, but Penn State, Maryland, and Purdue are all very losable, and would put them in a tough spot.  Just get one of those wins and Rutgers is fine.

Indiana: Last time out, Indiana was able to knock off No. 9 Penn State, providing a very, very, VERY good win for the Hoosiers.  A fairly easier – if that’s even possible in this conference – stretch to end the season should provide them a few more wins to bank on.

Ohio State: The Buckeyes were once in consideration for a final four team.  Then they completely fell off the map.  Now, they’re back on it, but are struggling for seeding.  Nebraska and Michigan this week could really help out.

Purdue: That 7-10 Big Ten record is certainly iffy, but the Boilermakers also have a lot of great wins.  Like Minnesota, they’re at the point where it would pay off to just not lose and hope.

Oregon: The Ducks have been my pick to win the Pac-12 since the beginning of the season, and it hasn’t changed just once.  Dana Altman has a very athletic squad who should be feared, and are an easy lock for the tournament.

Colorado: Given my previous statement, it’s not a big gap between the top two teams in the Pac-12, and I believe that Colorado is that second team.  McKinley Wright is a top notch scorer, but he could take a few weeks off and the Buffs will still be in the NCAA Tourney.

Arizona: Not many people may know this, but Sean Miller’s team is ranked SEVENTH in the NET.  Yes, the Pac-12 is getting back to the great conference it once was, and Zona is a huge reason why.

Arizona State: If I had to pick one team to move to a ‘lock’, it would be the Sun Devils.  They have all the makings of a lock at this moment, besides that ‘it’ feeling.  I’m waiting on 20-wins, because we all know how strict the committee has been with Pac-12 teams as of late.

UCLA: Talk about a team that’s been on the rise!  The Bruins sit at 17-11 (10-5), with five consecutive wins.  Three tough games to end the regular season include ASU, Zona, and USC.  Bruins will need at least one win and maybe two, depending on how they fare in the Pac-12 Tournament.

USC: USC’s weak scheduling has been a constant, and thus a threat to them not making the tournament, even with a good record.  I’d like them to get a win against Zona, ASU, or UCLA just to be safe, but even that may not be enough.

Stanford: The Cardinal still have four more games left, including a very big a winnable one tonight against Utah.  That could go a long ways for a team that’s been on the bubble for virtually the whole season.

Kentucky: Coach Calipari’s team is very defensive minded with the ability to put up points in a hurry.  UK is scary and will be in March no matter what.

Auburn: Auburn has a chance to knock of Kentucky for the second time this season on Saturday, but even if they can’t the Tigers have done more than enough for a tournament bid.

LSU: Like ASU, LSU is right there to virtually being a lock.  However, the SEC hasn’t been great this season, leaving little to know room for non-locks to mess up.  Tigers will most likely see their name pop up on Selection Sunday, but another win could help.

Florida: The Gators have been one of the disappointments from the preseason, but they can still make the NCAA Tournament.  That 17-10 record is iffy, so two more wins would be ideal.

Mississippi State: Right smack dab in the middle of the bubble is a Miss State team that has a few good wins, a few bad losses, and not much else.  All they can do is win games and hope it’s enough.

South Carolina: The Gamecocks are hanging on by a thread at the moment, but sixth in the SEC is helping their case for now.

Additional Should Be In: