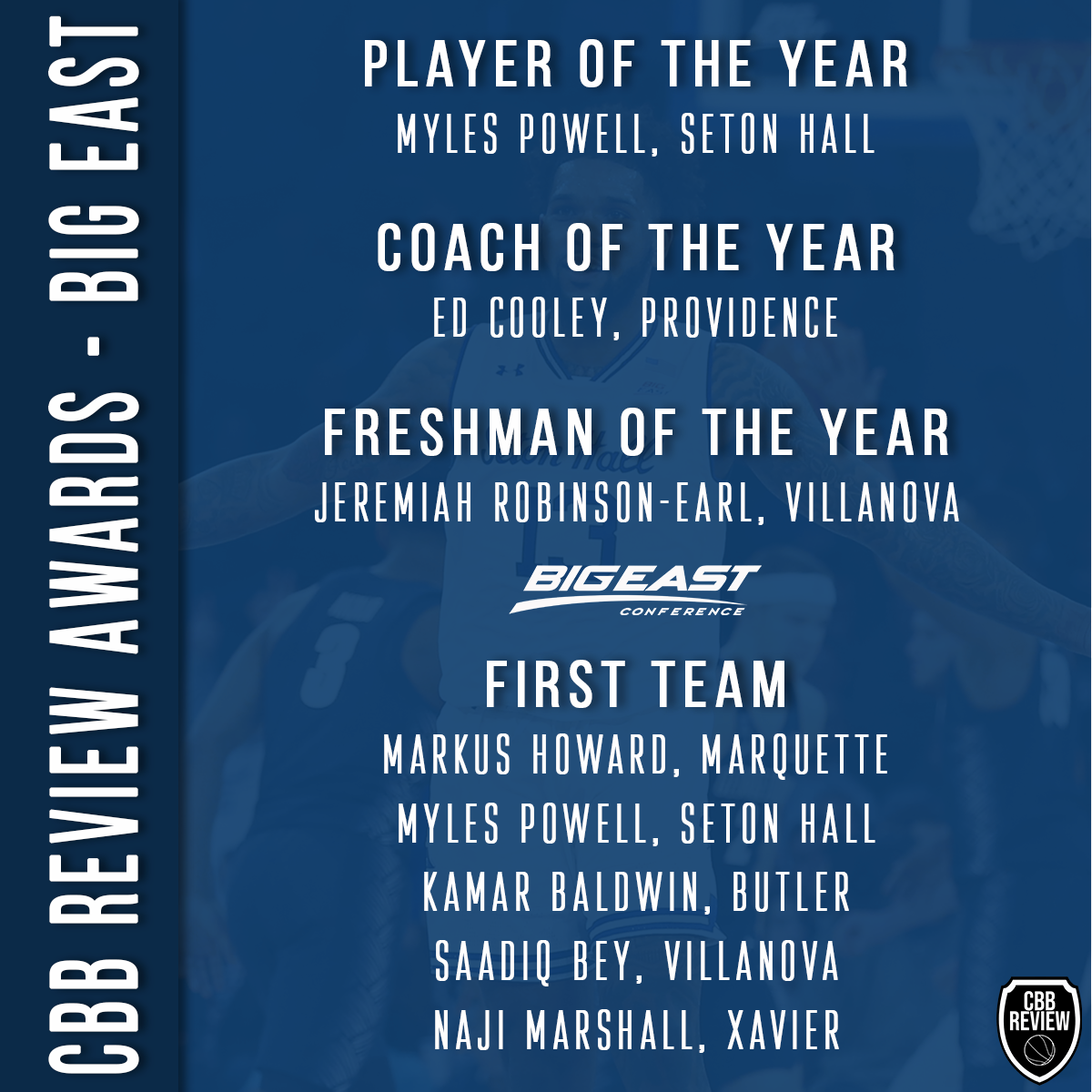 Can we get an encore this week?  The 2020 Big East season was certainly one to remember.  It featured the senior seasons of two of the best scorers in conference history – Markus Howard who broke a two decade old record, and Myles Powell who provided the league with so many moments.

As a conference, the Big East was also one of, if not, the best in college basketball.  With potentially seven teams in great position to receive bids, and Seton Hall, Villanova, and Creighton all with legitimate final four hopes, the conference has provided challenge after challenge all season long.

The Big East Tournament has a history of giving us some of the best conference tournament games each season and this year has all the makings to be just as special.

Without further ado, your Big East Awards and tournament predictions:

One of the best remaining rivalries since the Big East split up, St. John’s and Georgetown can always be counted on to deliver some quality basketball at Madison Square Garden.  While St. John’s certainly has the talent to get the job done and also have been playing especially well, I’m actually going to take the Hoyas.  Omer Yurtseven’s inside presence is too much for the Johnnies.

DePaul started the season as hot as anyone, but as Big East play unfolded, the Blue Demons started to fold with it.  Xavier meanwhile is right on the bubble in terms of the NCAA Tournament.  Tyrique Jones and Naji Marshall have been big all season long, but I’m actually going with DePaul.  Expect big things from Charlie Moore and Paul Reed if they do take care of business.

It looks like Marcus Zegarowski – one of Creighton’s most important pieces – may be out for the entire Big East Tournament, and especially this one.  With that being said, Ty-Shon Alexander and Mitch Ballock are more than capable of providing instant offense.  It may just be a bit closer than expected.

One of the more intriguing matchups in the quarterfinals pits Kamar Baldwin’s late game heroics versus Ed Cooley’s in game adjustments.  The difference to me here is the physicality from Providence.  Alpha Diallo and Nate Watson, among others, are complete animals on the boards.  If Butler isn’t knocking down threes, it could be hard for them to match the Friars on the glass.

Where DePaul’s offense was enough against Xavier, it won’t be nearly as efficient against a Jay Wright coached Villanova team.  Saadiq Bey and Collin Gillespie also prove to be a bit too much, as Nova rolls.

Myles Powell versus Markus Howard.  Does it get any better than that?  The top two scorers in the Big East and two of the top players in the country face off in the final quarterfinal of the night.  I’ve got a Pirates win, mostly because they’ve shut down Howard in both meetings this season.  Both teams are in need of a win to get hot before tournament time, and the Pirates are just too deep.

On paper, Creighton should win this game by a few possessions.  However, I’m still banking on Zegarowski being out, so I’ll keep on that Friars train.  After all, like against Butler, Providence will have the edge on the boards against Creighton, and with Zegarowski out, will have one less shooter to worry about.  Ed Cooley, welcome back to the finals!

The two rivals split the season series, each winning on each other’s home court.  This game is a neutral one for both, but one where both teams can get a lot of fans there due to how close they are to New York.  Game wise, I see a big performance from Powell.  He hasn’t had the games he’s capable of recently, but the Garden seems to bring out the best in him.  Hall in a classic.

The Hall has struggled against Providence this season, most recently losing at the Dunkin’ Donuts center a few weeks back.  I see a close game between these two in this matchup, and I see Seton Hall taking it.  Powell continues his hot streak and the Pirates win the Big East Tournament for the first time since 2016.

One thought on “Big East Awards and Tournament Predictions”