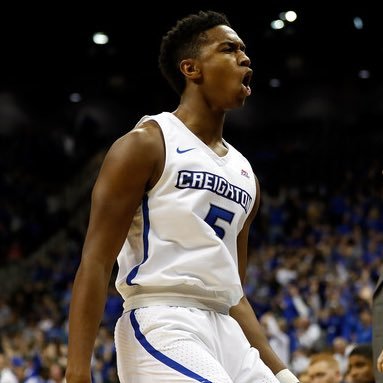 Creighton held the nations leading scorer, Markus Howard scoreless in the first half for the first time all season as the Blue Jays defeated Marquette on the road 73-65. Creighton won their eighth game of their last nine and now has five road victories in arguably the nation’s toughest conference.

The Big East’s highest-scoring teams battled in a surprisingly defensive battle as both teams struggled from the field. Both teams entered the game as top 20 teams in the nation shooting over 37% from behind the arc but the shots weren’t falling as the teams combined to shoot 4-27 from behind the arc in the first half. Struggling from deep, Creighton found their rhythm getting to the basket. The Blue Jay’s aggressiveness opened up a ten point lead at the break.

Marquette came out of the break hot going on a 16-6 run in the first five minutes of the second half to tie the game at 38. Creighton had the answer. After Ty-Shon Alexander exited the game from a blow to the throat he came alive capping off an 8-0 run with a 3-pointer to give the Blue Jays the lead permanently. The Golden Eagles continued to battle cutting Creighton’s lead to five on multiple occasions, but Creighton and Alexander always responded en route to their second straight road victory.

With the victory, Creighton moves just a half-game behind Seton Hall for first place in the Big East and now holds road victories over the Seton Hall, Villanova, and Marquette, all in the top four in the league. The Blue Jays were by 22 points from Ty-Shon Alexander. Marcus Zegarowski added 17 and Damien Jefferson finished with 11. Marquette held Mitch Ballock to only eight points, but Ballock dished out eight assists to lead the team.

Howard finished the night with 13 for Marquette, 14 points below his nation leading average. Sacar Anim led the was for the Golden Eagles with 18 while Theo John and Koby McEwen added 12 and 10 respectively. John finished with a double-double adding 10 rebounds. Marquette was held to 24.2% from 3-point range after coming into the game as the ninth best team in the nation shooting 38.8% from deep.