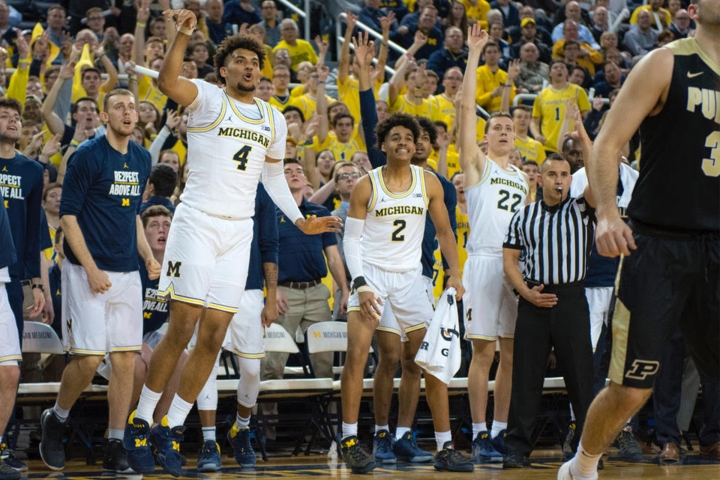 The time has almost come. Another season, another speculatory article of the potential happenings of madness that is the Big Ten conference. Last season, we saw one team reach Minneapolis as the Spartans dream for another national title fell short in the national semifinals. 2019-20 has the makings for a Big Ten team to win the national title, and it is anyone’s guess as to how it all pans out.

The Spartans enter 2019-20 as national championship contenders, and with Cassius Winston running the show they have every reason to be optimistic. Couple that with another solid recruiting class headlined by Rocket Watts and Malik Hall; Sparty is once again atop the Big Ten.

If there was ever a year where Mark Turgeon needed to lead his group to a deep NCAA Tournament run, 2019-20 is the season. While the loss of Bruno Fernando will certainly hinder the Terrapins front court, the returns of Anthony Cowan and Jalen Smith are crucial in terms of the Terps hope of getting to a Final Four.

Matt Painter is the new Bo Ryan of the Big Ten. It doesn’t matter who is on his roster, they are going to compete for a Big Ten Championship and make the NCAA Tournament year in and year out. Losing Carsen Edwards sure hurts the explosiveness of the Boilermaker offense, but also presents an opportunity for a new star to arise.

Chris Holtmann plans to lead the Buckeyes to their third straight NCAA Tournament appearance, and finally has a recruiting class to reflect his success in the Scarlet and Gray. Kaleb Wesson will once again be the focal point of the offense as the Buckeyes look to secure their first Sweet 16 appearance since 2013.

Year three of the Brad Underwood era in Champaign hopes to be the brightest. Underwood brings in another solid recruiting class, headlined by four star center Kofi Cockburn. Trent Frazier and Ayo Dosunmu lead the Illini in the back court, and  contributions from Giorgi Bezhanishvili in the front court bode well for the Illini in 2019-20.

The Juwan Howard experiment begins in Ann Arbor. Talent still exists on this roster, as Zavier Simpson, Jon Teske and Isaiah Livers will be the backbone of this team. Will the Wolverines have the depth to contend for a Big Ten title and deep run in the tournament?

Greg Gard and the Wisconsin Badgers are in a rebuilding phase in 2019-20. Following the departure of Ethan Happ, the Badgers are in search of a new man in the middle. Their core of juniors Nate Reuvers, Brad Davison, D’Mitrik Trice, and Aleem Ford will do much of the work for Gard and co.

After last seasons NCAA Tournament second round exit, the Hawks lost Tyler Cook to the draft and Jordan Bohannan to a hip injury. A tough task to replace, but doubting Fran McCaffery is the last thing you should do.

The Archie Miller era hasn’t produced much success in the eyes of the Crimson and Cream fans. 2019-20 needs to be a year where the Hoosiers get back to the upper echelon of the Big Ten, otherwise time might be running out for Archie. Trayce Jackson-Davis has the makings of a breakout freshman who should see plenty of minutes early on.

The Pat Chambers tenure in Happy Valley has gone on for too long. Chambers has had time to get recruits, and it has yet to pan out. Lamar Stevens looks like a lock for an All-Big Ten selection, but will need some help if the Nittany Lions have any aspirations of the Big Dance.

Richard Pitino’s Golden Gophers are always a tough out come conference play. Their success in 2018-19 was very impressive considering the lack of guard play the Gophers had to rely on. With Daniel Oturu and Eric Curry back healthy, the strength of this team seemed to be the front court. Unfortunately for the Gophers, Eric Curry is once again out for the season due to a knee injury. A crucial blow for their front court.

Fred Hoiberg returns to the college basketball world, this time over 200 miles west of Ames. Stepping into the situation Hoiberg is in is a tall task. As much as he wants to “win now”, it is not the most realistic expectation for this team. Look for Hoiberg to get a couple signature victories in 19-20 that he can build his program on.

Steve Pikiell has shown improvement during his tenure in Piscataway, but can the Scarlet Knights just get out of the cellar of the Big Ten? Geo Baker has All-Big Ten potential, but can he get any help?

Chris Collins enters 2019-20 without stars Vic Law and Derek Pardon. Two players instrumental in building the culture Collins envisioned for the program and taking the Wildcats to their first ever NCAA Tournament back in 2017. There is not much on this roster that will help contend for a Big Ten Title in 2020.