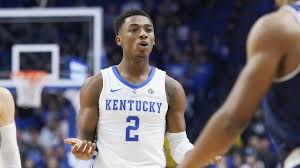 Ashton Hagans looks to be the man controlling the court this year. If he can step up, then Kentucky has the best potential to succeed this year both ball-distribution wise and shooting wise. Hagans seems to also be the leader for this young squad moving forward and can look to be a great facilitator for the rest of his sharpshooting team. Along with experienced Nick Richards, John Calipari will look to pair these two as a dynamic duo with Hagans in the backcourt feeding Richards in the paint.

Losing 4 of their starters may seem to hit Kentucky significantly, however, this shouldn’t stop them from being successful with their new young backfield consisting of Hagans and Maxey. These two young studs are looked as one of the most defensively and competitively set backcourts in the NCAA with Immanuel Quickley and Khalil Whitney looking to be forwards possessing a threat on the perimeter which does allow Nick Richards to play inside with much more space to work with. The key to Kentucky’s success this year will be determining the strength of their chemistry as there are a lot of moving pieces in the Wildcats’s gameplan and roster this year.

Facing a tough first game against Michigan State’s experienced team, this will be a battle between young and old and seeing if Hagans and Maxey are able to stop Cassius Winston’s agile movements and impressive ball handling. If the Wildcats can defensively step up against Michigan State, they are most likely looking at success for the rest of the year if they can keep the same tempo going. Their next two big games come within a week of each other as the Wildcats visit Ohio State University and then play Louisville at home. After that, their Big 12/SEC Challenge game comes on January 25th as the Wildcats travel to United Supermarkets Arena to play Texas Tech. Following matches with LSU, Tennessee, and Auburn, the SEC Tournament takes place from March 11th to the 15th. If Kentucky can have a strong start to their season and beat the easier teams and gain chemistry, they can prove to be a force in the later games and the SEC Tournament.