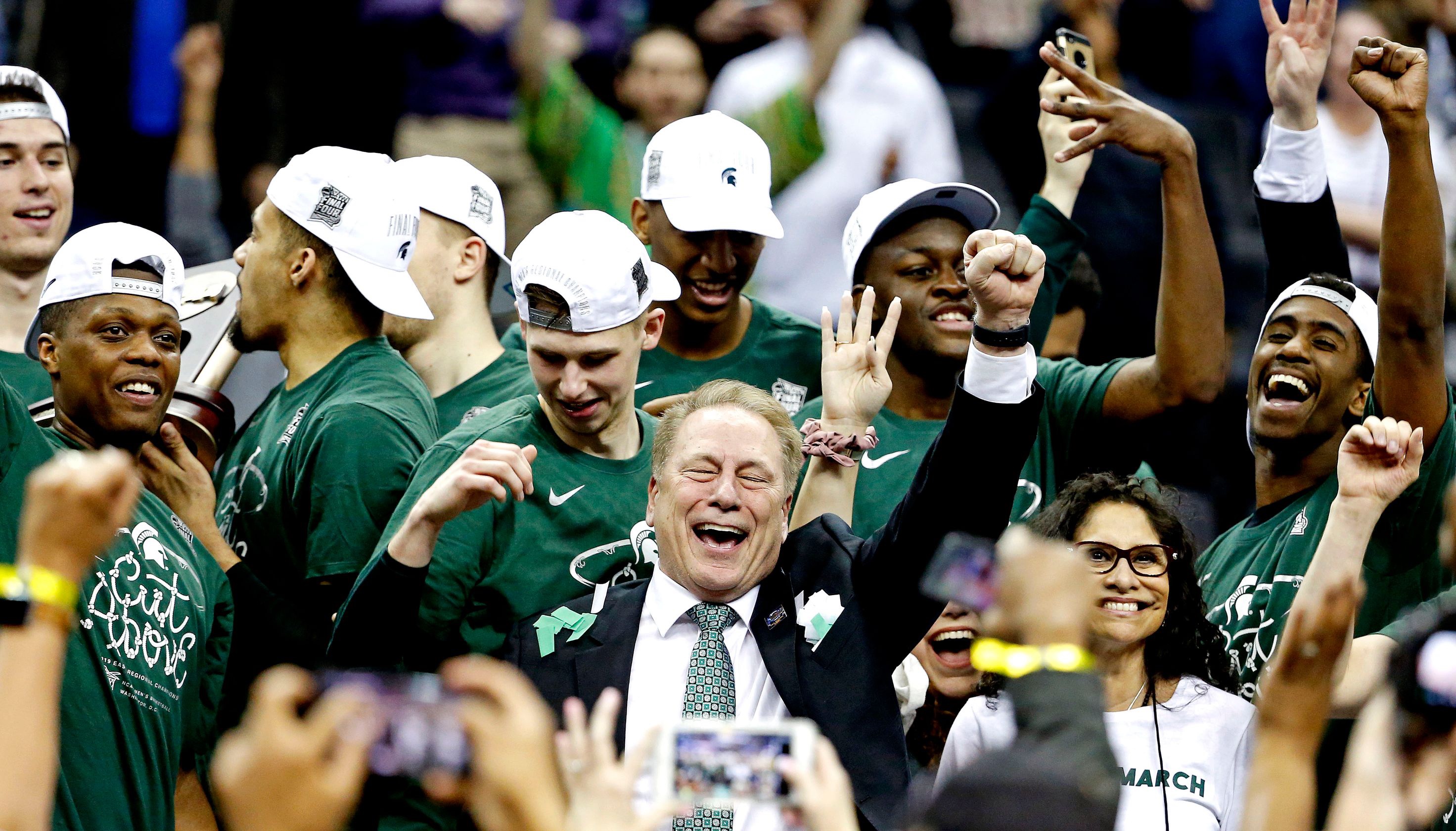 This weekend is a culmination of one of the greatest sports tournaments that happens every year in the United States….. the NCAA Men’s Basketball Tournament also known as MARCH MADNESS!

It’s the weekend that some folks will sit on the couch with their friends and watch basketball being played in simplistic beauty. It will also be a weekend where others will sit on the edge of their couch and hang off of every rebound, every turnover or every bad moment of time or player personnel management made by the coaches because all of it will determine if he or she wins the office pool. Yes, this is no lie. This is what March Madness brings to a nation of people who knows as much about the game of basketball as it does to the section of people who do not….. a simplistic Madness. Win….. or pack your bags and head home.

All of the favorites, with the exception of a few, are gone. There are a couple teams participating in the final two contests who weren’t even looked at having a chance at wearing the glass slipper at the end. There are also a couple of teams participating in the final two contests who you could call mainstays but just not royalty. Royalty for college basketball would be considered teams like UNC, Duke, Kentucky, UCLA, Kansas. Royalty is a title not given to everyone. Only to those who are always seen as the lineage of basketball’s finest.

Well all of those teams? Gone baby…. gone! Virginia and Michigan State are teams from the middle class. Those programs who are always sniffing time with the upper crust but are always looked at as belonging with the peasants. So in reality, college basketball is a lot like high school. You are either in the popular clique or you are just one of those people who are just going to have to graduate and make your own name.

This is why we should all, with much respect to Virginia, want Michigan State to win the national championship. Tony Bennett is a class act guy. He is like another Brad Stevens on the sidelines. His demeanor is one that makes you feel like Ghandi is in total control of the program. His players work hard and they really buy in to what Coach Bennett has brought to Charlottesville. But how can you not like the Izz?

If you can say one thing about Coach Tom Izzo it is that he has been very consistent….. as a victorious coach taking his team to the tourney and as a motivator for his team. Coach Izzo always seems to hit all the right buttons. Why then should we want to see the Spartans win it all?

1). Tom Izzo – So what is so special about Tom Izzo? If you have paid any attention at all to Big 10 Basketball, much less the Spartans, you will have noticed one thing. Izzo don’t waver. Izzo doesn’t and has not backed down. Izzo still coaches and I mean coaches hard.

People gave him Hades over the verbal exchange he had with Freshman Aaron Henry. He also had people who stood up for him and vouched for him. My opinion? The fact that we have people that have to stand up and vouch for coaches who hold their players accountable shows how soft we have become as a nation and how many prima donnas there are out there who do not want to be or choose not to be coached by people the caliber of Tom Izzo.

As a coach, one thing that I always promise my players is that I will have their back. I also tell them that a part of me having their back is coaching them the very best way that I know how and sometimes that may be holding them accountable in ways that they do not like. This is why we should love Tom Izzo. In all the games I watched Duke play this year and have seen them play in the past few years since the “one and done” invasion hit Durham, I have seen less of the motivated Coach K and more of the NBA Coach K.

Coach K coached the “best” players this country, and Canada, had to offer coming out of high school. He had the best player that I had ever seen since the UNLV days of Larry Johnson. Duke had the best talent on one team that college basketball had ever seen in a long time. How did they fare? They nearly were defeated by Johnny Dawkins and UCF. They were taken to the wire by Texas A&M bound Buzz Williams and his team formerly known as the Hokies of Virginia Tech. Then….. and then…. they played Michigan State. Let’s face facts. Michigan State won that game for one reason. Toughness. They were most definitely the toughest team on the floor. And if we are being honest, let’s drop another one. If Zion doesn’t play in the tournament, Duke probably doesn’t advance to the round of 8.

Which brings me to my next point…..

2). Freshmen. The One and Dones. Well in Duke’s case, it was the 3 and dones. Three wins and lose the round of 8. People can say that Michigan State was just lucky. They can say the Spartans were older. I even made that point. But how much older were they really? Honestly they were older when it counted. Izzo also made a statement of truth when he commented on his exchange with Henry. After a freshman plays so many minutes and so many games, then the dude isn’t a freshman anymore. He should know what is going on! Truth Coach Izzo…. Truth!

But Zion, Barrett, Jones and all those guys are freshmen too for Duke and they played a lot of minutes. True. But mentally how old were they in basketball years? If you remember watching the very first games of the tournament…..and watching Michigan State…. what do you remember seeing? Myself? I remember watching a very animated and passionate Tom Izzo get in his players face to the point they were holding him back in huddles. What in the world was he doing you ask? Preparing them for a Final Four run. For Duke. For every single team that he knew they were going to face in the tournament. Why? Michigan State, of their 16 players, has 7 freshman. The Seniors, Matt McQuaid and Kenny Goins and Junior Cassius Winston. These players…..this is the engine that is Michigan State and Tom Izzo is the alternator. Because if you don’t think all the juice runs through him to jumpstart the team, you are freakin nuts. If you think Coach Tom Izzo didn’t start being animated and coaching his players hard until the tournament started, again you are freakin nuts and you do not know Coach Izzo and the Spartan program very well. During the entire season I have to ask one question….. how many times did you see Coach K coach up those freshmen like Izzo did? And if you haven’t heard…. Coach K is having second thoughts on the whole One and Done thing at Duke. For historical purposes, put this years Duke team up against the 1992 and the 2001 team and they get beat….. handily. Why? Because back in those days, Coach K was Izzo and his players took on his personality. They fought. They were tough mentally and physically. They were what Michigan State still is 18 years later after being in a Final Four with Jason Williams and Shane Battier……the epitomes of toughness.

So why should you root for Michigan State to win the National Championship?

Michigan State is a microcosm of the greatness of America:

– Built from the ground floor

– Made great by a blue collar work ethic

– A program where you can be an unknown one day and a household name by March…. Magic Johnson, Mateen Cleaves, Draymond Green, Morris Peterson….. Cassius Winston.

Another show of respect for the program of Izzo’s? He has a freshman named Jack Hoiberg. If the last name sounds familiar his dad is Fred of Iowa State game who led the Cyclones to the NCAA Tourney as a player and coach and played for the Chicago Bulls. Where did the younger Hoiberg want to go? Michigan State and Izzo. Why? Because he knew he would be coached. Izzo gains respect just by who he recruits. ESPN is like a Zion Williamson stalker. I bet I counted 50 reruns of the same dunk after one game. How many of you guys knew about Cassius Winston before the tourney? Exactly. How many of you even knew Michigan State was good? One did…. Izzo. Exactly.

This is Michigan State Basketball. This is why, with much respect to Virginia, Auburn and Texas Tech, this is why you should want Michigan State to win the national championship. Because they are what you should want your son or daughter to be apart of in their college or their high school program. A love and respect of team, love and respect of each other. A program where you are held accountable of your actions. You are preached at if you screw up and you are hugged if you do your job. Last but not least, there is a passionate hunger for greatness on and off the court.