Boilers grind out First Round victory over Old Dominion 61-48 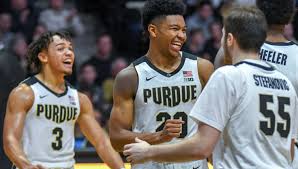 It wasn’t the prettiest of first round showings for the third seed in the South region, but a win is a win. The Purdue Boilermakers (24-9) locked in on defense all night, and were able to do just enough on the offensive end to survive and advance.

The Boilermakers were led by familiar face Carsen Edwards, who scored a game high 26 points of 7 of 23 shooting. As a team, the Boilermakers shot only 37 percent from the field (20-53) but held the Monarchs to 27 percent shooting (18-67).

Matt Painter needed to make a last minute adjustment to his starting lineup, as Sophomore guard Nojel Eastern rolled his ankle during pregame warm ups, and was unavailable in the first half. In his absence, freshman Eric Hunter Jr. made his first career start.

The Monarchs were never able to sustain any consistent offense against the Boilermakers, as they were held to a season low 19 first half points. Ahmad Caver scored a team high 19 points for Old Dominion, but Caver lacked help from his supporting cast. After winning the Conference USA regular season and tournament championship, Jeff Jones’s Monarch squad should still be proud of a very successful season. Coach Jones is currently diagnosed with prostate cancer, and to be able to take his team to the NCAA Tournament is remarkable. Job well done, Jeff, we are all praying for you.

With the win, the Boilermakers will face 6th seeded Villanova (Saturday Time TBD). The Boilermakers last hosted the Wildcats in the Gavitt games back in 2017, with the Boilermakers narrowly losing at home 79-76. Sunday will certainly be a fun one in Hartford.