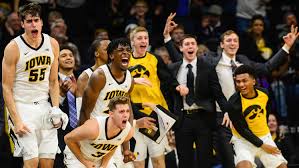 The Hawkeyes trailed by as many as 13 in the first half when the Bearcats jumped out to an early 18-5 lead, but Fran McCaffery’s crew were able to weather the storm and only went into the locker room down five, 36-31.

Joe Wieskamp was the bright spot for the Hawks in the first half, scoring 10 points on 4/5 shooting. He finished the game with 19 points, a much needed effort from the freshman making his first career tournament start. For the Bearcats, guard Justin Jenifer scored a career-high 19 points, keeping the Bearcats in the game.

In the second half, the Hawkeyes outscored Cincinnati 48-36. With the win Iowa will face the winner of the 2/15 game between Tennessee and Colgate.

The Big Ten conference improves to 6-0 so far in first round contests. Wisconsin and Ohio State will play their first round games later today.