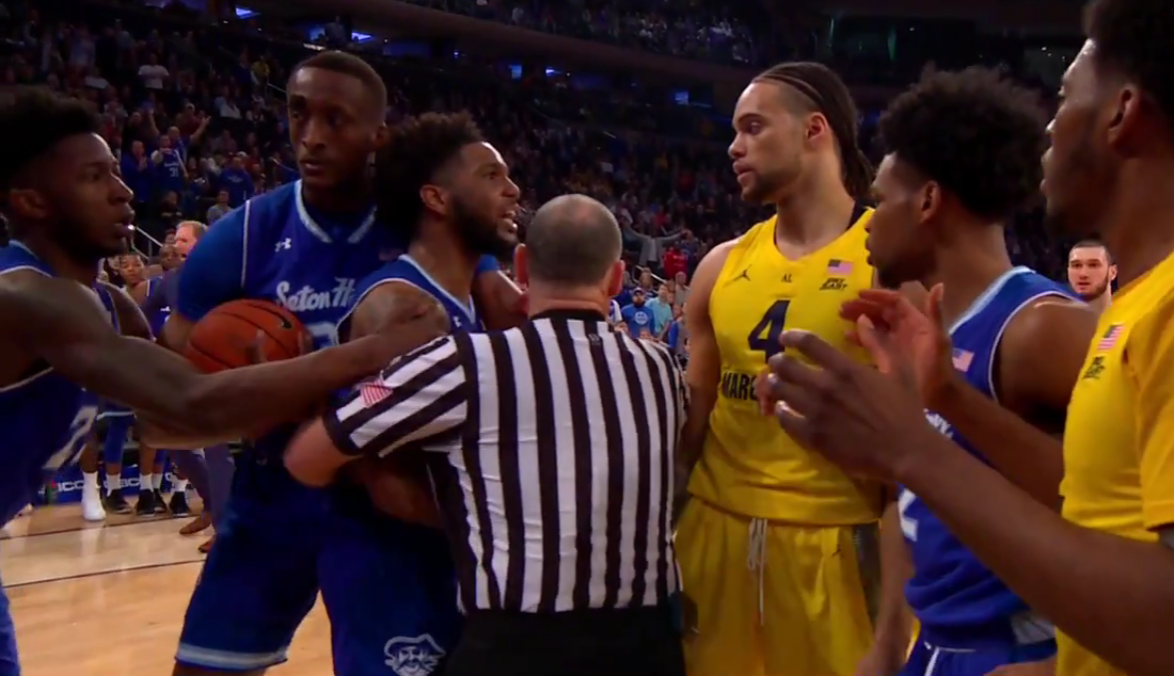 In a chippy heated game that saw three ejections, eight technicals and, multiple flagrant fouls, Marquette and Seton Hall fought it out to the end in what brought back memories of the old Big East. It’s their third meeting of the season with both teams winning their matchup at home.

Marquette came out of the gates quickly with Markus Howard allowing things to come to him and the Hauser brothers to score the first 11 points for Marquette as they jumped out to an early lead. The Golden Eagles had their offense flowing nicely but even more important got right into the head of Myles Powell while he picked up technical early in the half and was held without a field goal for the first ten minutes of the game. Marquette opened up a 12 point lead in the second half before Seton Hall went on a run of their own to close the gap back to four with 7:59 remaining in the first. Marquette answered the Pirates run by pushing their lead back to 10 and holding the lead but Seton Hall closed the gap to three at the half and limiting Markus Howard to one point in the first half.

After halftime, it was time for the stars to get going as Myles Powell started the second half hot knocking in back to back threes and bringing Seton Hall back in the game evening the score at 44 apiece. Powell continued quickly after with a jump shot and giving Seton Hall it’s first lead of the game with 14:58 remaining in the game, as Markus Howard still remained without a field goal. A technical foul on coach Kevin Willard sparked Marquette who quickly answered and went on a 7-0 scoring run in less than 0:30 to regain the lead. With 12:48 remaining and Marquette with a 53-50 lead Myles Powell took exception to a foul and things got heated. Pushing and shoving with players on the court and Steve Wojciechowski running out onto the court to keep his players safe and out of the way. All said and done after a lengthy review three players were ejected in total two from Marquette and one from Seton Hall. After the excitement, the whistles got tighter to keep things in hand as both teams are heated and ready to reach the final to face Villanova.

After a putback by Homer Bailey, Markus Howard finally found the bottom of the net as he knocked in a 3-pointer for his first field goal of the day with 10:08 to play giving Marquette a 60-54 lead. Back and forth action from then was all that this game had to offer and back to back threes finishing with a step back by Myles Powell gave Seton Hall the lead back. The Pirates extended their lead to 66-63 capping off an 8-0 run before Markus Howard calmly stepped to the line and made one of two. As time wound down the Golden Eagles looked tired and their shots fell short as they missed free throws and shots allowing Seton Hall’s 8-0 run turn into a 12-2 run and a five-point lead with 3:53 to play. In the final four minutes of play, Marquette losing two big time players and defensively minded specialists showed as the Golden Eagles had no answer for the Pirates on defense. A foul on Quincy McKnight followed up by another technical brought Marquette back within two points. With 1:14 to play down by six Markus Howard stepped to the line for three shots and the 90% free throw shooter only made one of three. The misses all but sealed the fate for Marquette as Howard continued to miss down the stretch but the will and fight remained. Marquette attacked the basket and three players for Seton Hall fouled out and they slowly clawed there way back into the game. After yet another technical on Seton Hall for hanging on the rim, Marquette trimmed the lead down to one. Markus Howard had one last chance to win or tie the game but his step back three fell short and Seton Hall hung on for an 81-79 win.